A delicious salami, pepperoni, mozzarella, and ricotta calzone based on Italian Easter pie! 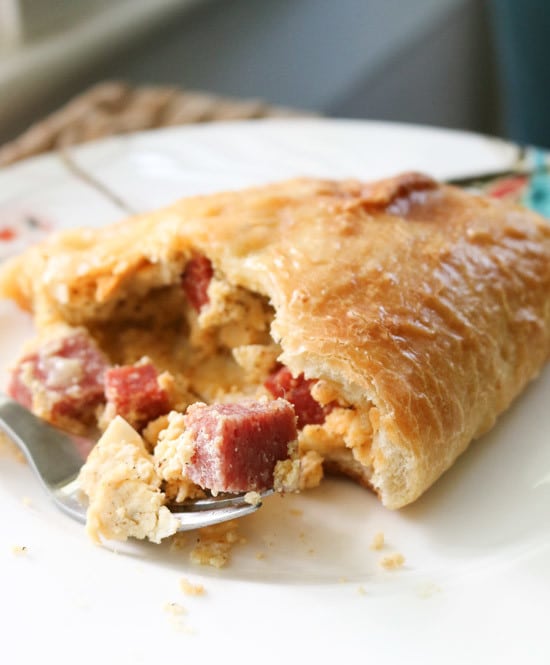 I know you’re thinking, “It’s September, why is Caroline writing about Easter pie? Isn’t Easter like, six months from now? And what is Easter pie anyway?”

The answers, not in the same order, are:

2) Yes, Easter is like, almost exactly six months from now, and almost six months ago …

1) … which is why I’m writing about Easter pie in September. I haven’t eaten Easter pie in half a year, and I won’t get to make it for another two seasons, so it is like peak craving time for the stuff. I’m at the furthest point in the year from Easter pie – it’s neither fresh in my taste-memory nor right around the corner for me to anticipate.

3) So, what is Easter pie? The answer to that question is surprisingly more difficult than one might think. The word “pie” really throws people off. You say “pie,” and people immediately think of sticky fruit fillings and custards and lightly toasted meringues. Then you say “salami” and it’s all over. 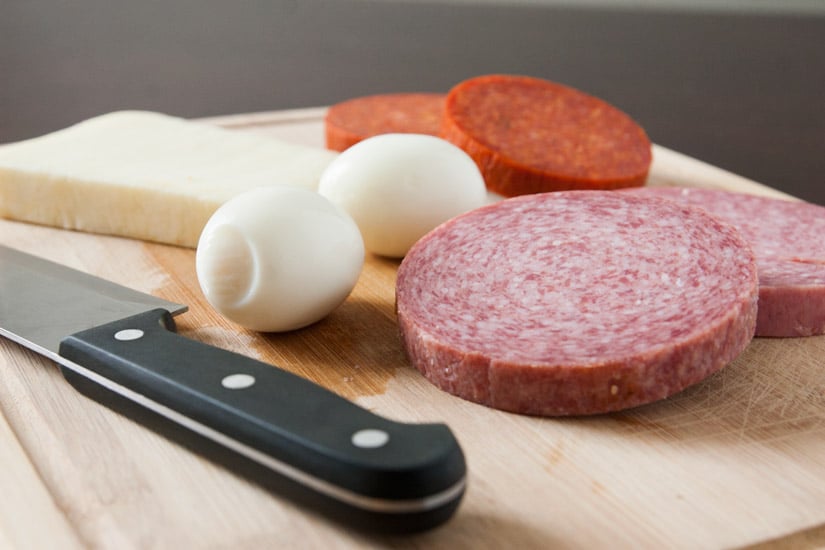 Ours has a ricotta cheese base, with a raw egg mixed in to help it set when you bake it. It’s packed with diced meats, cheese, and eggs, and it’s encased on top and bottom with a crust.

We’ve tried to get around the sweet-pie connotation by saying it’s a savory meat pie. But then you get images of shepherd’s pie or minced mystery meats and that’s really nothing like it.

Then we tried “it’s sort of like a quiche, but not so eggy” but there really isn’t much in common with a quiche except that it’s savory and pie-shaped. One egg makes not a quiche.

But recently I’ve discovered that a much more apt comparison is that it’s like … a giant calzone. “What is Easter pie?” the eternal question, requires more than a bullet point to answer, but suffice it to say, my new answer to that question was the inspiration for this recipe. 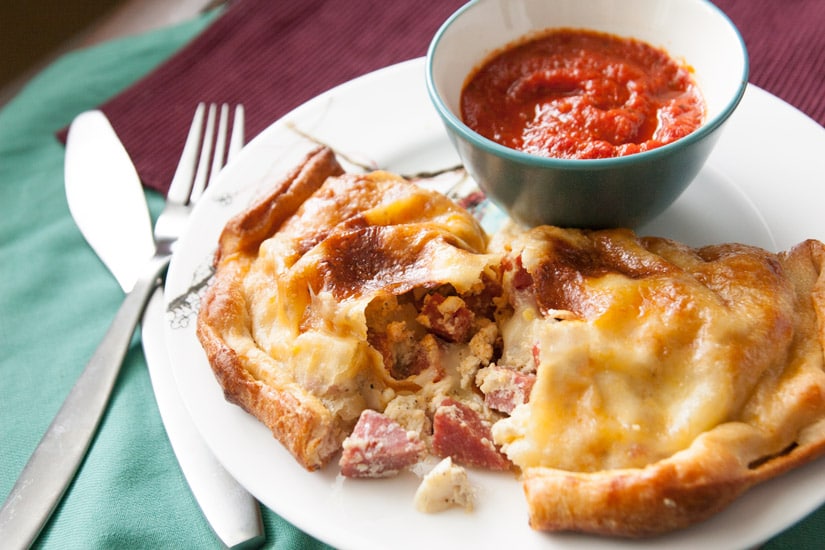 Easter pie began as an Italian Catholic tradition. Anyone who practices fasting and abstinence for Lent now knows it can be so haaaarrrrd not to eat meat on Fridays.

But back in the day, depending on where you lived, it was way harder. You had to abstain from meat on ALL THE DAYS and also cheese, butter, eggs, sugar, and rich foods in general, so people had to use up all their nice fatty foods the day before Lent (hence Fat Tuesday or Mardi Gras) and then when Easter came around, heck yeah! No better way to celebrate the risen Christ than by feasting on lots of meats and cheeses! That is, if you’re Italian, anyway. So lots of Italian families have recipes passed down through the generations for meaty, cheesy, rich, decadent Easter pies.

For example, Pope St. Gregory (d. 604), writing to St. Augustine of Canterbury, issued the following rule: “We abstain from flesh, meat, and from all things that come from flesh, as milk, cheese and eggs.” 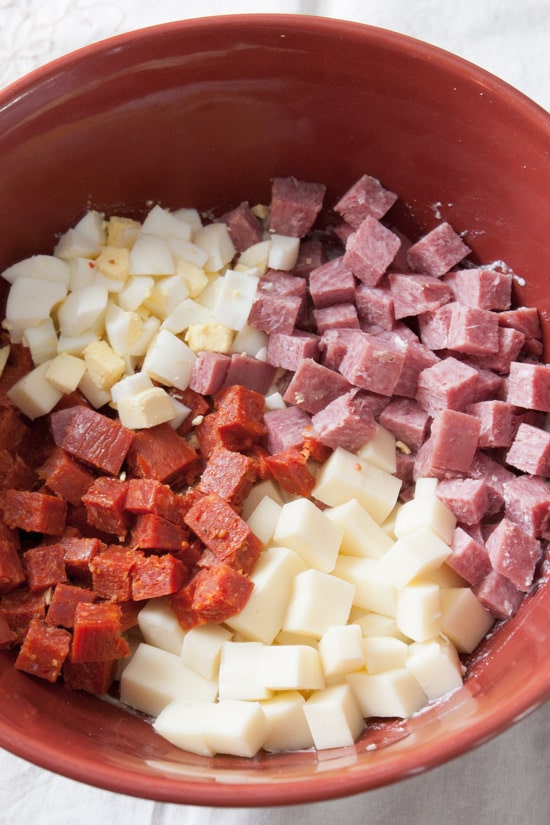 Easter pie can be many things. Some families make it with sausage and cheddar cheese, some make it with ham and parmesan. I have even seen sweet versions, and in some regions of Italy, they make Easter bread, which sometimes contains whole hard-boiled eggs so when you slice it you get a pretty little cross-section.

My family’s recipe is made with salami, pepperoni, mozzarella, hard boiled eggs, and ricotta cheese, encased in a deep-dish Springform pan pie crust that was originally a homemade bread dough but over the years has evolved into frozen bread dough, pizza dough, or croissant dough, according to preference. 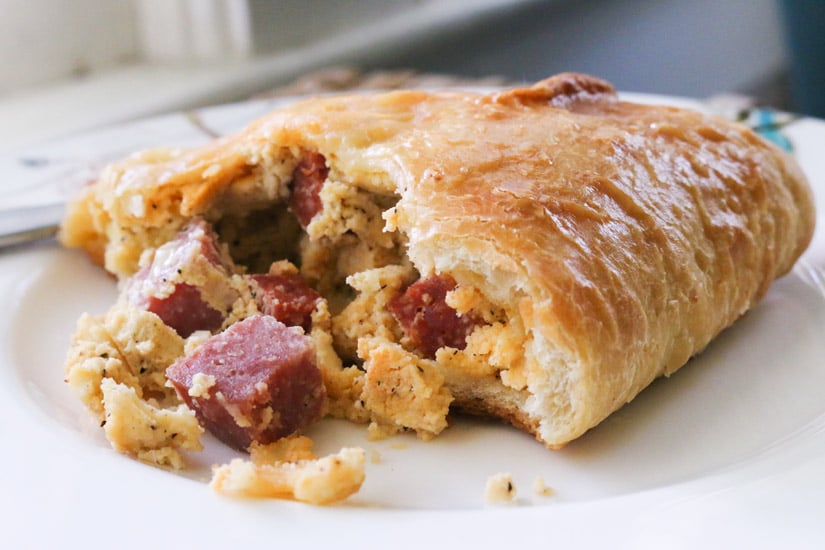 I didn’t know its historical origin when I was growing up, just that it was an Italian family recipe passed down on my mom’s side that we made every year without fail for Easter. Even today, with my three sisters, cousin, mother, and aunt scattered between South Carolina, Pennsylvania, and California, everyone with families of their own, we all make Easter pie in spring and know that we’re all together in spirit. It’s really very special.

So now, in September, at the opposite equinox from that most delicious of holidays, I dare not make actual Easter pie, in case that’s sacrilegious or something. But an Easter pie calzone … it’s got all the same ingredients, in a conveniently sized individual portion, and this recipe makes enough for a couple meals without making enough for three whole pies. Just enough to satisfy the craving. And we all know how much I love hand pies. And it’s not-Easter-pie enough that I don’t feel bad about making it at not-Easter. I mean, you dip the calzones in pizza sauce, and we’d NEVER put pizza sauce on REAL Easter pie. So it’s like, totally different, right? 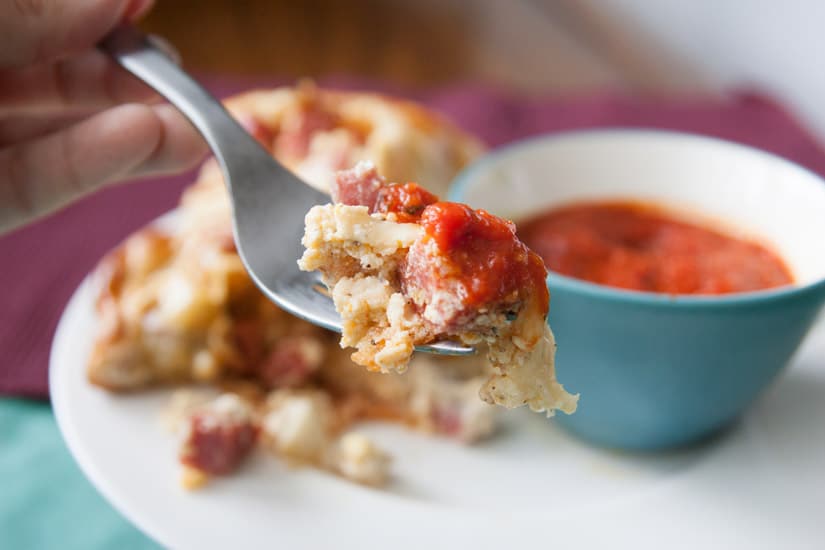 I had to make this twice (HAD to) because the first time around the crust was just too darned thin. I used one roll of Pillsbury pizza dough (about 12 oz) for four extra-large calzones, and the dough barely fit around the filling. It was delicious, but you couldn’t pick it up. So I decided to make the difficult sacrifice for you of making this a second time to work out the dough issue, even though I had JUST had this a few weeks ago. Luckily Mike is just as much of an Easter pie fan as I am.

The second time I got two pounds of refrigerated pizza dough from the deli section of the grocery store, and that was a much better dough-to-filling ratio. I’m sure you can tell which photos are from the first go-round and which are from the second. And come on, you tell me which one you’d rather have — the ones with the nice, thick, shiny, crusty exteriors, right? Surely not the paper-thin, floppy ones. Please compare:

Delicious, but floppy and falls apart. Have to eat with a fork. Boooo.

Delicious, complete with golden crusty goodness. Can pick it up like a giant hot pocket. Yayyyy.

I made four gigantic calzones and would probably do six next time, so the size is a little more manageable for a single meal. I ended up splitting one calzone into two meals, and wished I had a little more, while Mike ate his whole calzone at once and felt like it was a bit much. So I won’t make this a third time (unless you insist) but I’d really suggest doing six instead of four, and I’ve written the instructions as such.

The best thing about these (I mean, besides the fact that I get to eat not-Easter-pie in autumn) is that they’re super easy and fast to put together. Besides the baking, the most time consuming part of this recipe was standing at the deli counter waiting for them to cut my half-inch slices of meat and cheese. Score!

I’ll definitely be sharing the real Easter pie recipe with you come springtime, but in the meantime, I hope you enjoy these calzones as much as we did. 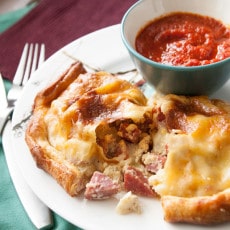 For easier preparation, order meats and cheese sliced 1/2 inch thick at the deli counter. I usually need one slice each of the salamis and mozzarella, and two slices of sandwich-style pepperoni. Most recipes I've seen for calzones say to bake for 15-20 minutes, but my calzones were still pasty looking at that amount of time. It took me a good 45 minutes to get a nice golden brown, although I'm sure it was cooked through before then. I have since realized my oven runs 25 degrees cool and takes an extra 15 minutes to preheat. Please check your calzones every 5 minutes or so starting at around 15 minutes in case your oven is different than mine! Adapted from my family's Easter pie recipe
Tried this recipe?Mention @pinchmeimeating or tag #pinchmeimeating on Instagram!