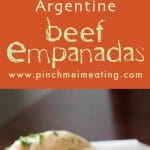 Get a taste of South America with these baked Argentine beef empanadas: beef, potatoes and onions wrapped in a flaky pastry crust. Serve them with chimichurri!

Disclaimer: This post contains affiliate links. If you make a purchase through one of my links, I will receive a commission.

One of my fondest college memories is my friend Derrick teaching me how to tango in the hallways of our dorm at the University of Arizona. We went to local milongas downtown Tucson to dance and soak in the music and rhythms of Argentina. Later, after he returned from studying abroad for a semester in Buenos Aires, he raved about the little empanada shop down the street from his apartment, and he made us the most delicious beef empanadas like the ones he had eaten there.

The distinct flavors of parsley and cumin with the kick of red pepper flakes gave a unique flavor to the juicy beef that burst from its flaky crust. Add that to the delicious herby chimichurri we spooned over the top, and I was in love.

While Derrick is still an avid tango dancer, DJs milongas, and even translates vintage tango music on his website, Charleston has a much more active swing and blues dancing scene, so I’ve been a part of that community since I’ve been back in my hometown. But when I saw that Try the World‘s current box was Buenos Aires (read my review of the Argentina box here), it brought back memories of ganchos, ochos, and crackly old recordings of accordion music on a dimly lit dancefloor. I thought of Derrick and signed up right away.

When I got my Argentina box in the mail, I knew I had to make Derrick’s empanadas to go with the bottle of chimichurri it came with.

Derrick said to use La Salteña empanada wrappers for these if you can find them, but I’m not sure where there’s a Latin market in town and they don’t carry them at our regular grocery stores, so I used this recipe for the dough. I had to add an extra sprinkle or two of water to get the dough to hold together enough to roll out, and I cut the circles out with martini glasses (because I’m classy like that). They were quite tasty. I thought the dough tasted similar to pie dough, so I bet if you wanted to save a little time you could use refrigerated pie dough instead if you can’t find or don’t want to use pre-made empanada wrappers.

A word to the wise: Don’t use refrigerated croissant dough. I had that thought a while ago and the empanadas were wayyyy too flaky and buttery. The croissant’s flavor and texture overwhelmed the filling, and that’s just not cool.

I made the wrappers a day ahead. If you go that route, you can put little squares of parchment paper in between the dough circles to make them easy to separate the next day. You can also make the filling a day or two ahead if you’d like.

When you fill the empanadas, just put a tablespoon full of the filling in the center of each wrapper. Fold in half, and then either roll the edges or pleat them. Press with a fork to seal. If you want the crust to be shiny, you can brush them with a beaten egg before baking. I skipped that step here.

When they were done, I served them with the chimichurri that came in my Try the World Argentina box, but you can make your own chimichurri quite easily with some herbs and olive oil. The one I used was very tangy, thin, and tasted almost like a smokey vinaigrette, while other chimichurris are thick and green like pesto.

I pretty much think everything is better if it’s stuffed in a personal hand pie – calzones, empanadas, turnovers, you name it. If I can pick it up, maybe dip it in some sauce, and have the fillings burst with flavor when I break through the crust, it’s won my heart.

My husband Mike ate these with a fork and knife, because that’s just the kinda guy he is. He eats his pizza with a fork too. I always think of that Seinfeld episode where Mr. Pitt eats his candy bar with a fork and knife, and then George starts doing it too, and before you know it the whole world’s gone crazy cutting their Snickers bars into little bite-sized pieces on a fancy plate.

Mike is all of them, and I’m the super-uncultured Elaine still eating my pizza and chicken and green beans and salad and empanadas with my hands. But it’s cool, y’all. I won’t judge, whether you eat these with your hands or a fork. I’ll only judge if you don’t eat these at all, because empanadas are awesome.

I had a lot of filling left over when I made these, so I’m going to take the liberty of halving what I made for you. It made about 17 small empanadas, which was enough for us to have dinner and leftovers! 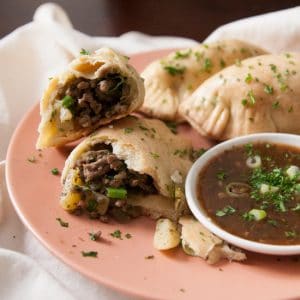 To make chimichurri, mix a generous amount of finely chopped parsley, along with oregano, pressed garlic, and red pepper flakes, in a bowl with olive oil and red wine vinegar until it’s a spoonable consistency. Season with salt and pepper to taste. Spoon chimichurri over each bite or dip empanadas directly into the sauce.
Tried this recipe?Mention @pinchmeimeating or tag #pinchmeimeating on Instagram!