Note: At the time this Try the World review was written (Aug. 18, 2015), I had purchased the product with my own money and was not associated with the company at all. I am now an affiliate for Try the World, so this post contains affiliate links. The content of the review has not been changed except to offer you new special discounts!

For my recipes that use ingredients from the subscription boxes, visit my Try the World page. 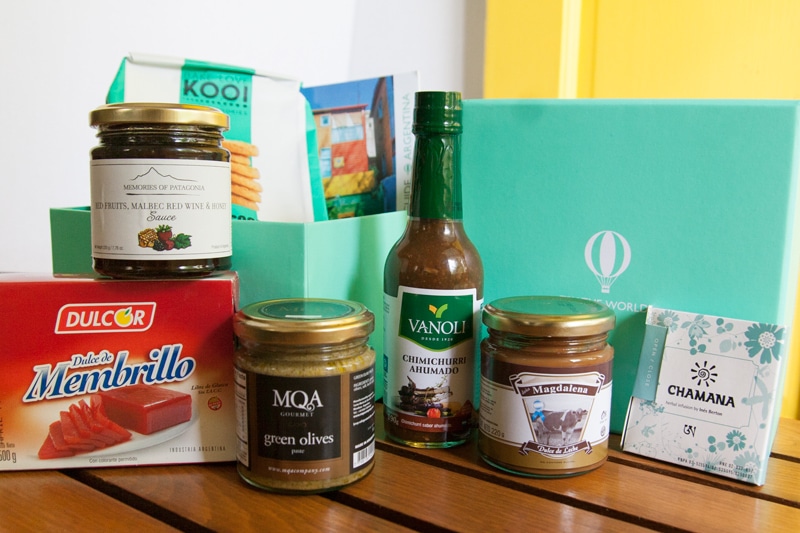 My hometown, Charleston, SC, is well-known for its cuisine. But while we have many, many amazing Lowcountry food restaurants, I find we are a bit lacking in the international food area.

A friend who just moved here was surprised there was no Cuban restaurant in town. We don’t have a proper dim sum restaurant where they come by with little carts of flat shrimp noodles (yes please) and chicken feet (no thanks). And I have to wait until I’m visiting Raleigh or Tucson before I can satisfy my insatiable craving for Ethiopian food. It’s HARD, you guys!

So when I came across Try the World, a subscription that sends you a bimonthly box filled with gourmet goodies from a different international city, it whispered sweet nothings into my ear until I caved and signed up for a six-month subscription. It only took about 10 minutes to seduce me.

In addition to several actual food items, each box includes a cultural information booklet that contains a list of songs from the country so you can make a themed playlist while you cook, a list of movies you can watch while you eat, and even a poem from one of their local writers. It also includes a recipe or two that uses one of the ingredients they send you. There’s a list of what each item in the box is, a description (because sometimes the jars and packages don’t have English on them), and suggestions on how to use them.

I paid $105 for a six-month subscription, plus I got the free Paris box, so it averages out to $26 per box, which I think is pretty reasonable for a box of culture and curated deliciousness showing up at your front door.

I know a lot of people price-hunt each item online and then shake their fists when the total comes out to three dollars less than what they paid for the box — but for me, this subscription is just as much about the the experience of receiving a package and discovering a thoughtful selection of foods I may not otherwise ever try.

You can get your first box for free if you sign up for a subscription through my link, and 15% off when you use my coupon code, pinchmeimeating! Win-win! 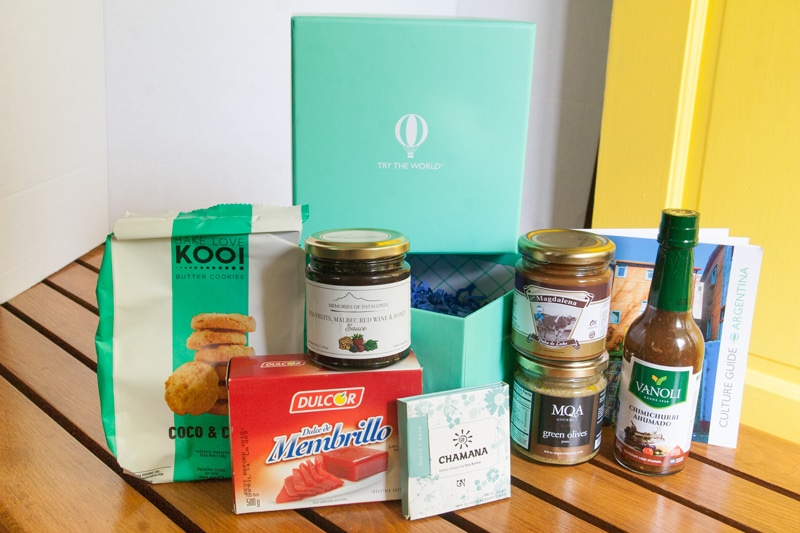 In the name of full disclosure, I will say it took me a couple weeks longer than they said it would to get my first Argentina box and free Paris box. And when I sent them a message on Facebook to inquire about my shipping status, they were not prompt in their response. Turns out they had some issues with shipping the Argentina box because it’s so full of things in glass jars or something and I guess a lot of people were getting boxes with broken items, so they were scrambling to fix the issue instead of responding to inquiries.

They did eventually respond to me, and by that time I had gotten my boxes. The best part was, I got my Argentina and Paris boxes intact, and then a couple weeks later I got a second Argentina box and another Paris box too! The Argentina box had an extra layer of bubble wrap around the bottle of chimichurri and additional packing around the box itself, so I figure my second box was the in-case-your-first-one-was-broken backup box, but the customer service guy said I could keep the extras, which is awesome because there are a couple items in there that were SO GOOD and are unavailable for separate purchase in their online store.

So, when I opened my Argentina box, it included:

I was quite impressed.

I was expecting to get a box, have a single awesome international cooking/music/movie night at home, and be done with it. But so far, we have had three occasions to use the ingredients from the Argentina box and we still haven’t used everything up. It’s great because it challenges me to make foods I wouldn’t normally make with a flavor palette outside my Italian-influenced comfort zone.

Our first Argentina night, I marinated some lamb steaks in the red-fruit, malbec wine, and honey marinade. I grilled it on our Griddler

along with some green beans, which we bought spontaneously just thinking they would go well with the lamb and then later realized Argentina is actually a large-scale producer of green beans. Perfecto! We tossed the grilled beans with some of the chimichurri.

Everything was amazing. The sweet marinade balanced perfectly with the rich creamy lamb and melted in my mouth. The smoky, tangy chimichurri enhanced the tender, crisp, grilled green beans. Mike and I couldn’t stop saying, “This is so good,” to each other the whole time we ate. Then we got to dessert: vanilla bean ice cream topped with the dulce de leche.

Holy cow. It was so much better than the stuff you can buy at the grocery store. Wow. I’d highly recommend it room temperature actually. Better than cold, and even better than hot, in my opinion. Even if you don’t sign up for a box or a subscription, you can still get the dulce de leche by itself in their online store. Edit: The dulce de leche is no longer available! Hopefully they’ll get it back soon.

The second Argentina night I made beef empanadas (recipe here!), the delicious grilled green beans again, and served both with chimichurri. On the side we had crostini with goat cheese topped with the green olive paste. SO YUM. Ice cream with dulce de leche again for dessert.

Last week, I busted out the food box a third time. My sister and brother-in-law were in town from Pittsburgh with their 8-month old, so they were at our house hanging out along with my mom and my sister who lives down the road. I wanted to put out a snack so I made some crackers with goat cheese and olive paste, because yum. Those disappeared pretty fast so I just brought out the whole jar of olive paste with some more crackers, and then we demolished the bag of cookies and spooned the dulce de leche on top.

I still have yet to make the tea and use the quince paste (planning on having that with cheese and crackers or crostini as well, yum!) AND I have my Paris box I haven’t even touched yet! Looking forward to some nice French caramels and tea, and maybe making their included recipe for steak tartare. (I’m a sucker for rare and raw meat.)

Anyway, based on my first box that has given me multiple nights of enjoyment and the second one I haven’t even started on yet, I must say I’m glad I subscribed. I’m quite looking forward to my next two boxes, and who knows, I may renew my subscription. I hear the next one is Japan. And their customer service has gotten a lot more timely since they resolved the Argentina issue. That’s my two cents, especially if you’re a lover of international cuisine like I am!

Update Oct. 2016: I hope this Try the World review was helpful to you! I love my subscription and think it’s a great investment for anyone who loves international gourmet food and cooking! I have been writing recipes using ingredients from each box I receive, which you can see on my Try the World page if you’re looking for examples of the kinds of exciting things you can make with the ingredients from your boxes!

I was not paid to do this review, and I was not sent a free box by them for review, because I am a brand new blogger and nobody knows me yet. Nope, it’s just that I wanted to share this cool thing with you, in case you hadn’t heard of it or were looking for some insight on this service before signing up. And also so I could give you a bit of background before I share the empanada recipe with you later this week. If you decide this is something you’d like to try and you sign up for a subscription through my link, you’ll get your first box free, and I’ll get a small commission so I can buy mass quantities of Argentine dulce de leche to eat with a spoon.

Edit: While I was not paid or sent a free box to do this Try the World review, I am now an affiliate for them, so this post contains affiliate links and I will receive a small commission if you subscribe through my links. The review has not been altered from its original writing except to update links and provide you special offers.

Disclaimer: This post also contains an affiliate link for the Griddler

, and if you click my link and buy one, I will get a commission. They’re super awesome for grilling indoors and the plates flip over so you can use it for pancakes.