These moist, dense Earl Grey scones with floral rose and lavender icings will make you feel like you’re in an enchanted garden! 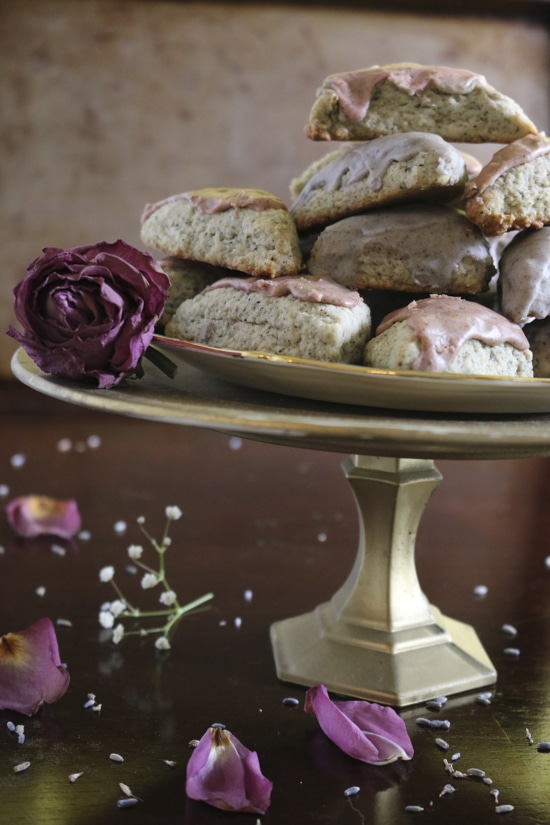 Hello again, all five of you who wondered where I’ve been this last month and a half. Let me explain/make excuses for my brief absence.

About a month ago I made these awesome delicious scones (Earl Grey, with rose and lavender icings). I spent a couple hours taking photos and they were the BEST photos I’ve taken, and Mike said they were the BEST scones he’d ever had. I was pretty stoked. I even had my post written and everything, I just had to pick my favorite photos, make a Pinterest-friendly image, and type up the recipe.

We were going out of town for a wedding that weekend so I made a folder in dropbox and told my favorite 30 or so photos of the Earl Grey scones to upload in case I wanted to work on them while we were on the road or in the hotel. I clicked upload right before we walked out the door to leave. 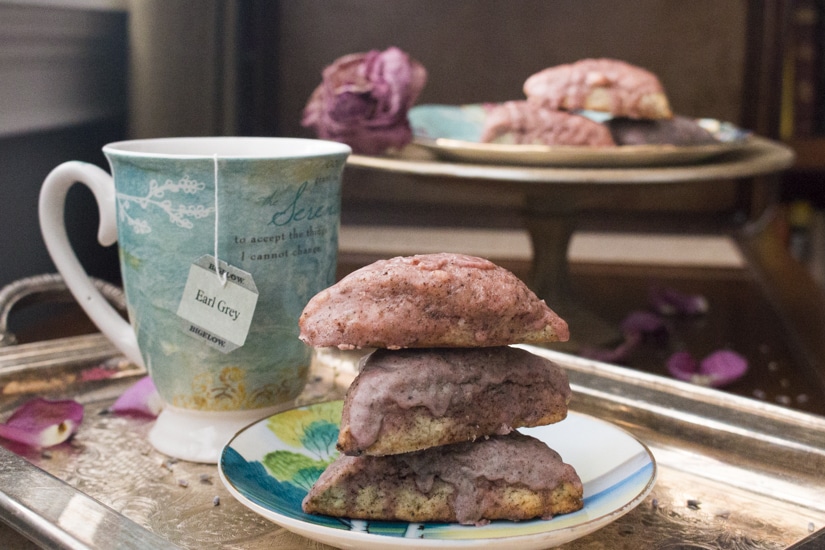 Well, I didn’t get a chance to work on them that weekend but I did want to show them off to my mom in Columbia while we were on our way home. So I logged in to dropbox and discovered only one photo had successfully uploaded before our crappy internet connection must have died.

(spoiler: the one photo that uploaded is the feature photo for this post)

When we got home, I once again flipped through the photos of the Earl Grey scones and admired them, and then stupidly decided to procrastinate again.

A couple days later my computer froze. And when I restarted it, I got the flashing question mark folder icon of death. That’s the one where it says “Hard drive? What hard drive?” A flashing question mark folder is not always deadly, and I had gotten one a few weeks earlier, freaked out, managed to boot my computer, and backed everything up. But this one was accompanied by an ominous clicking noise, which is the real death sentence. I tried everything I could find, and finally took my computer in to the Apple store, where they essentially told me my computer had had a long and wonderful life but it was time for it to go (unless I wanted to pay a third party to replace my hard drive since they didn’t carry the part, and then I’d still be running a new hard drive on 8 year old hardware). 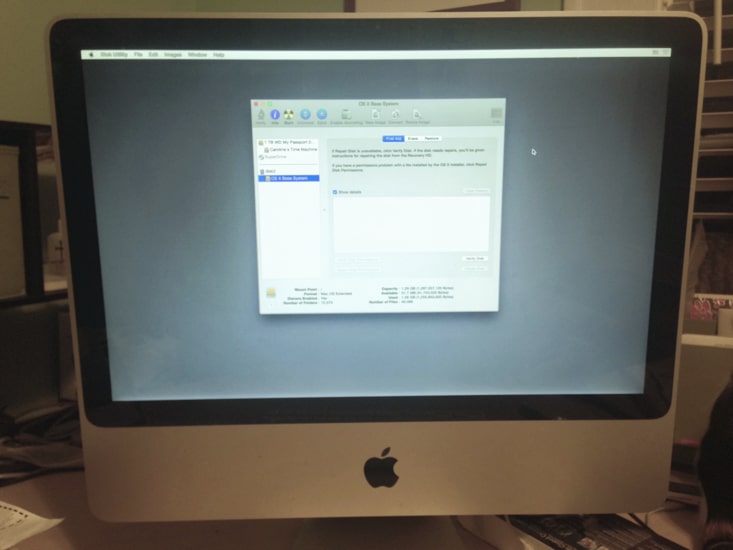 Of course, the glorious scone photos were moved to my computer and deleted from my memory card between the backup and the hard drive crash. So all I was left with was the one, single photo that uploaded to dropbox.

Now, I realize it could have been much, much worse. I did not lose any photos that were even remotely sentimental or any important documents since I had the good fortune to have been able to back up the computer a couple weeks prior. But I was still heartbroken over the loss of my scone photos, mourning the death of my longtime desktop companion, and finally, grumbling over the loss of my precious daylight hours with that most wretched of days, the one where you “fall back” an hour and supposedly one single extra hour of sleep on one night is supposed to make up for it being dark at 5 p.m. for the next 5 months.

I remade the scones a couple weeks ago and was viciously protecting them from Mike like Gollum with his precious ring until I could reshoot what I hoped would be comparable to my original photos. I came home and immediately started gathering props to reshoot them, my camera had trouble focusing on the very first photo because the light outside was already going. The photos are not near their former glory, but at least I do have a couple more photos for you. 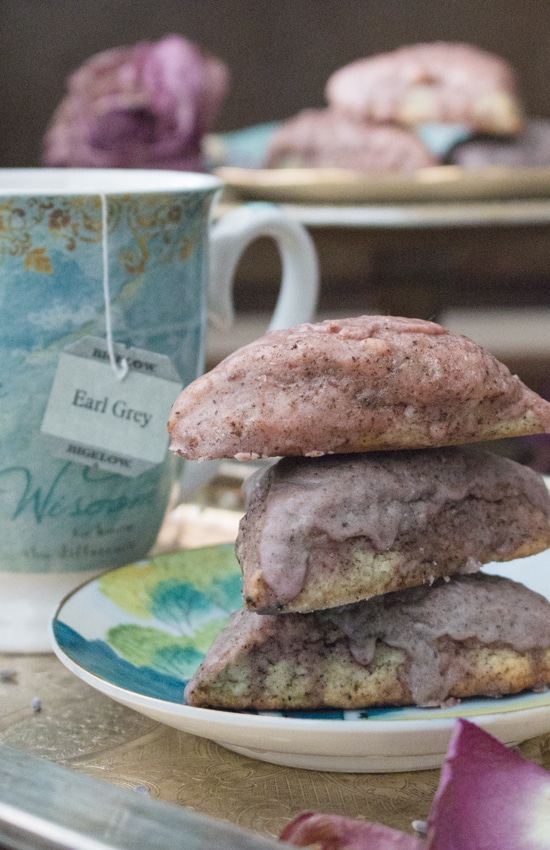 I got tired of hoarding them and wanted my sweet hubby to enjoy them, so we ate them all. And they were delicious. So you and I will both just have to deal with imagining these photos as awesome as they were, because if I hold myself to that same standard now when I have no light on weeknights and no time to shoot on weekends, I will never post another recipe on here until spring.

I’ve decided I need to be done sulking and moping over all that I lost and instead be excited for fall, the holidays, and my new fast computer; and start cooking and shooting again.

So, here are the scones. And they are awesome, even if some of the photos are not. 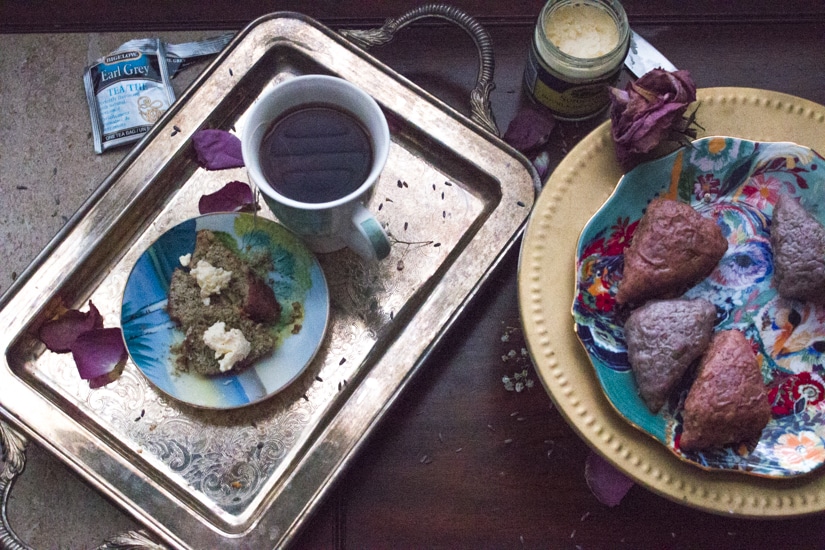 These Earl Grey scones evoke to me a sort of romantic storybook era, the one I daydream about on Pinterest when I save photos of magical hidden garden alcoves. I imagine spending my days reading and tending to my romantic cottage garden filled with lavender and foxgloves like Mary Lennox. In the afternoon I would settle at a little white wrought iron table under an arbor covered in climbing roses to sip on my Earl Grey tea, eat dainty finger sandwiches, and spoon clotted cream onto freshly baked scones.

I do have a real full-time job, so that storybook world can’t be my whole life. But maybe, just by taking the time to slow down and prepare such a charming, old-world treat, I actually make that restful, peaceful daydream more of a reality.

The scones are just the right texture — a bit crumbly like a scone should be, but not at all dry. They’re moist and dense, not cakey. More like a slightly flaky thick shortbread, rather than a biscuit. The dough is laced with vanilla beans and tea leaves, ground up into a fine powder for all the flavor without any unpleasant texture. And the icings (both rose and lavender, since I couldn’t decide) lend just the right sweet, floral complement to the timeless Earl Grey flavor. (Make sure you let the icing dry completely before you store it the scones in an airtight container, or it might stay kind of gooey!) Of course, they’re mini (we all know how much I love miniature baked goods) so you can have one of each flavor without feeling guilty. 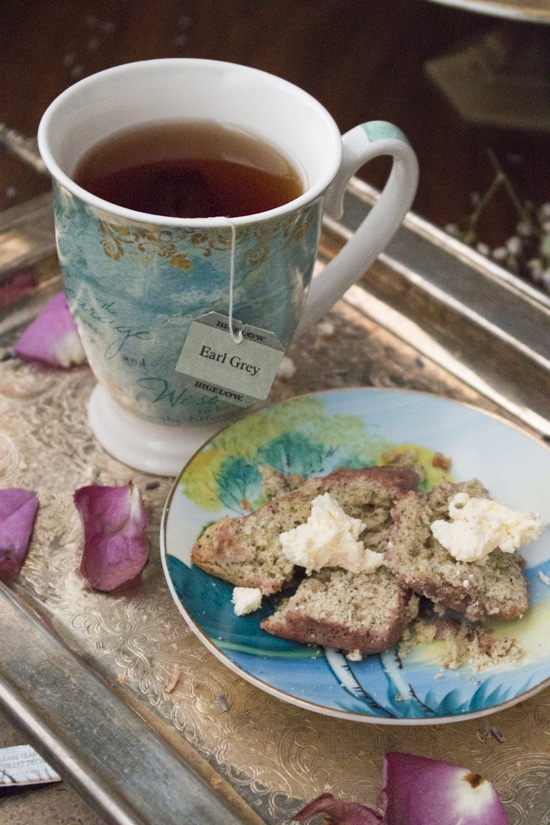 If you have trouble finding rose water like I did for the longest time, I finally found it in the ethnic food section of our regular grocery store with the Middle Eastern and Indian foods. And I got my dried lavender at our local Spice and Tea Exchange, but you can also order some on Amazon.

These are wonderful with a little unsweetened whipped cream (or if you have some, clotted cream is also delightful – I found some at World Market). There is plenty of sugar in the icing. You should have some cream leftover from the recipe, and I’ve discovered a dangerous little trick where you can easily make a single serving of whipped cream in under a minute with a handheld milk frother

. Dangerous because now it’s SO EASY to have whipped cream on demand without making a production out of it, even if you just want it to top off a single cup of coffee or a couple miniature scones. (the frother I linked to is not the one I have, since I’ve had mine for probably 12 years, but it’s similar and has lots of good ratings)

UPDATE 4/30/16: My old milk frother did finally kick the bucket and I bought the one in the link above! Looks great and works great, and you can read my post about making a single serving of whipped cream with it here! 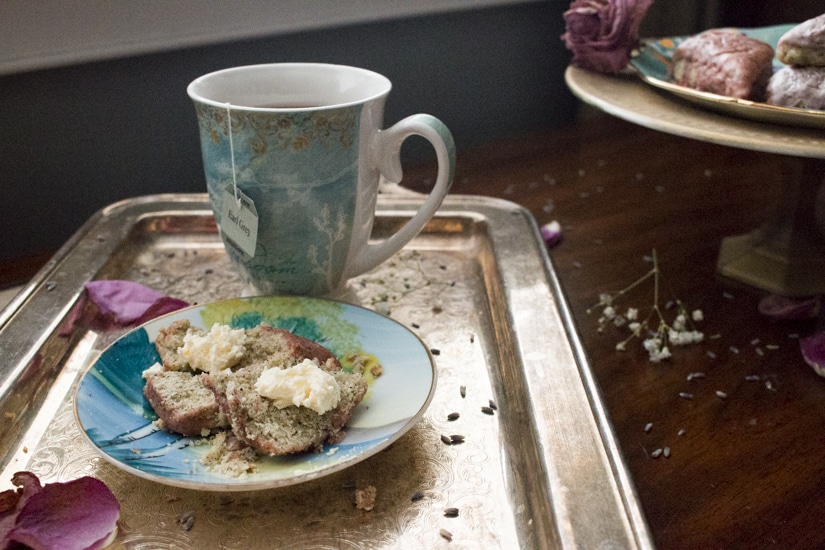 So what are you waiting for? Make these Earl Grey scones. Brew some tea. Nibble, sip, relax, and enjoy your peaceful retreat.

For more ideas for your own at-home tea party, follow my Tea Party Recipes and Ideas board on Pinterest! 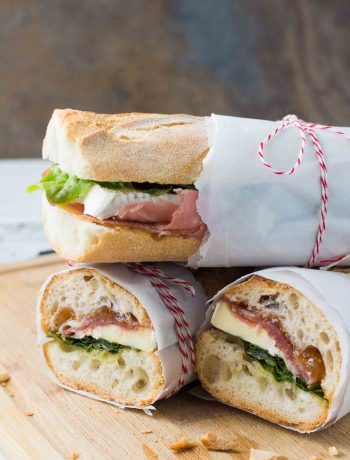 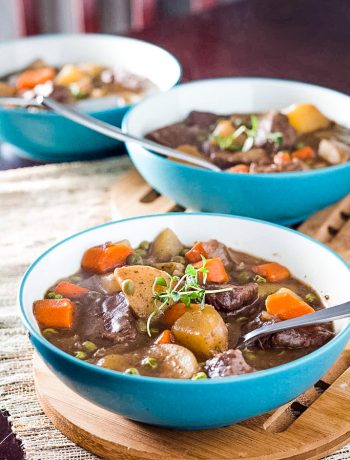 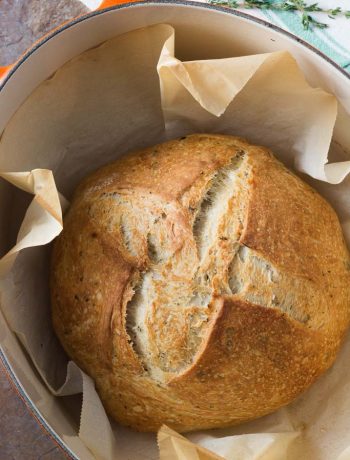 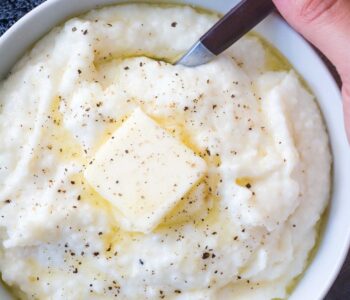 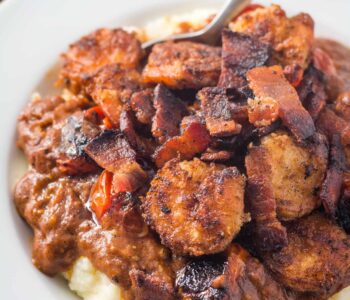