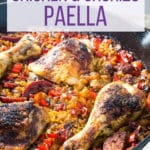 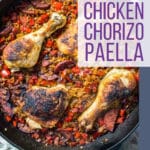 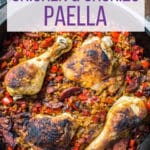 This weeknight version of chicken and chorizo paella has all the flavor of an authentic paella, but uses only one pan (that you already have) to make and easier-to-find ingredients!

It’s been a little while since I’ve posted a main course, but I promise, I do actually eat dinner.

This dish is a long time in the making. It’s inspired by the chicken and chorizo paella served at our local Spanish tapas restaurant, Barsa, which is one of my favorite places to go.

It has a relaxed, loungey atmosphere with dim lights and a couple sofas. Or, you can sit outside on comfy outdoor loveseats under string lights.

The paella takes 45 minutes to cook (like this one does), so you nibble on a series of tapas, sip on an aperol spritz or sangria, and enjoy the company while they make it to order.

The tapas are delicious, and the paella, with its flavorful rice and bone-in chicken, is well worth the wait. I hope to add some Barsa-inspired tapas recipes for you soon too!

I’ve made this chicken and chorizo paella recipe three or four times already in testing, adjusting the quantity of liquid, type of rice, and cooking technique. In the process, it’s become a favorite for me, my husband, and my work friend who is frequently a taste-tester when I bring leftovers to the office for lunch.

My husband, who is nearly always the dish-washer when I cook, tried to tell me I didn’t have to make the paella last night as he anticipated a mountain of dishes for such an impressive-sounding dinner.

But here’s a surprise: I’ve been developing this paella recipe to be as simple as possible. That means you’ll only use one pan (a cast iron skillet) and a cutting board. And the majority of the cook time is hands-off, in the oven.

This is not authentic paella. But it is easy, delicious paella.

The first time I made paella, I was so committed to authenticity that I ordered paella rice from Amazon since I couldn’t find it in the store. But I don’t want you to have to do that.

Honestly, I wanted to put something out there that would be pretty easy to grab and go at the store. While this may mean it’s not the most authentic paella recipe out there, it comes pretty close and it’s pretty freaking delicious.

Why isn’t this chicken and chorizo paella authentic?

Here’s some really great info from Saveur on what makes an authentic paella.

But, like I said, this is not authentic paella.

This is easy weeknight paella using ingredients that are easier to find at the store, using cookware you already have. So there are some compromises in the name of convenience.

But I really want the socarrat.

Me too, dear foodie, me too.

Believe me, I tried to get you a socarrat with this recipe. That’s the main reason I’ve tested it four times. It just doesn’t happen with the cast iron skillet and the baking in the oven.

To develop a socarrat, it would need a thinner, more conductive metal like the carbon steel or enameled steel of the traditional paella pan. It also benefits from having direct heat from underneath, which again, you don’t get in the oven.

Well, Caroline, what about cooking it on the stovetop? I tried that too. Not only did I get no socarrat, but the chicken skin was soggy. To me, crispier chicken skin was a higher priority than socarrat which I couldn’t seem to get anyway.

What about just finishing it on the stove then? It got burnt before it got crispy. The cast iron retains heat much longer than a thinner paella pan does, so instead of caramelizing and then cooling more quickly once it’s removed from the heat, it caramelizes (maybe?) and then continues to retain the heat and burn once you’re done.

I’m generally not a huge fan of large, single-function cookware, but it’s possible that I will develop a more authentic paella recipe in the future using the right pan and the correct rice.

All said and done, though, apart from the lack of socarrat and the apparently-inauthentic use of chorizo, this is a pretty awesome paella — simple to make, easy to clean up, and a new favorite in the Lindsey house.

So is there anything you didn’t compromise on?

Hey now. Yes, there is. You’ve got to use saffron to flavor this rice. I don’t buy that “make it extra yellow using turmeric” business. The yellow color is nice but you’ll be missing out on a lot of essential flavor if you substitute turmeric for the saffron. I know saffron is pricey (it is legendary for being the most expensive spice in the world) but a little goes a long way, and you’ll want that flavor for this dish.

And I use smoked Spanish paprika (okay, you can use non-smoked paprika too but I love the smoky flavor.)

While chorizo isn’t typically used in paella, I did at least use Spanish chorizo.

What in the world is the difference between Spanish and Mexican chorizo, you may ask? Mexican chorizo is usually found fresh (raw) and crumbles like Italian sausage. You can brown it like ground beef or can cook it in link form.

You’ll find Spanish chorizo near the salami in your grocery store. It’s just like a salami or pepperoni — cured and fully cooked, but flavored with smoked paprika (my favorite!). You can see what it looks like in the photo below!

What can I substitute for Spanish chorizo?

If you can’t find Spanish chorizo, I would substitute another type of cured sausage rather than Mexican chorizo. Andouille sausage has a pretty similar flavor. If not, you could use a salami.

If you want to use Mexican chorizo, I’d cook it first in link form (if you can find it like that) and then slice it to have a more similar appearance. If you crumble it, you can add some smoked paprika to more closely emulate the flavor.

How do I make this weeknight skillet chicken and chorizo paella?

So easy, you guys!! It only takes one cutting board and one cast iron skillet to make this chicken and chorizo paella. Easy to make, easy to clean up.

First, use bone-in chicken thighs and legs. The dark meat is more flavorful and juicy, and the bones help flavor the rice, which, of course, is what the paella is all about. Plus, that crispy chicken skin is to die for.

You’ll start by seasoning the skin with salt, pepper, and smoked paprika. Then sear it in your cast iron skillet with a little olive oil, 3 minutes per side, to get a nice bit of color on the chicken skin. Set the chicken aside and use the drippings to sauté some diced onion, bell pepper, and chorizo.

Then you add the other spices — saffron and smoked paprika — along with the rice. Deglaze the pan with a little white wine (or water, if you prefer) to scrape up all the nice flavored bits. Then add a can of chicken broth and make sure everything is nice and evenly spread out.

After that, you just nestle the chicken back into the rice, cover the pan, and bake it: first covered, then uncovered. Then broil for a few minutes to re-crisp the chicken skin.

If you like this recipe, you’ll also love my sweet and spicy crispy baked chicken thighs!

Check out these other great recipes you can make in your cast iron skillet! 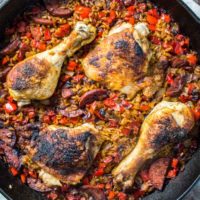 This weeknight version of chicken and chorizo paella has all the flavor of an authentic paella, but uses only one pan (that you already have) to make and easier-to-find ingredients!
Print Recipe
Course: Main Course
Cuisine: Spanish
Servings: 3
Calories: 748kcal
Author: Caroline Lindsey
Prep Time:10 mins
Cook Time:1 hr
Total Time:1 hr 10 mins