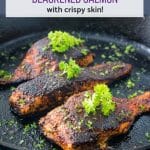 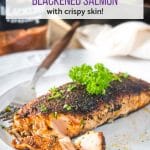 Blackened salmon is so easy to make and the crispy skin is truly life-changing! In just 10 minutes, you too can be feasting on this flavorful and healthy dinner!

Salmon is one of my staple foods – we make it one or two times a week usually, and I never get tired of it!

My go-to recipe for a long time has been this foil packet salmon with lemon and soy sauce. It’s so easy I can practically do it in my sleep and has almost no hands-on time, so it’s perfect for a quick dinner after a long day at work! Just throw a couple ingredients in a foil packet, bake, and peel off the salmon skin after it’s cooked.

But recently I made some blackened salmon fillets — with the skin on. A quick sear on the top in a cast iron skillet, and a few minutes sizzling on the skin side resulted in the most flavorful, moist and flaky salmon with shatteringly crispy skin.

It was a pretty mind-blowing difference for someone who usually removes the skin after cooking salmon in a foil packet! (still an advisable move for that kind of recipe where the skin is moist and never crisps up)

Leaving the skin on and getting it nice and crispy… It’s like eating bacon-wrapped salmon without using bacon. It’s like when you add potato chips to a sandwich for that nice bit of crunch. It’s just freaking amazing.

It is a little more hands-on than the foil packet recipe I love, but not by much.

I do recommend descaling your salmon fillets if they haven’t already had the scales removed (a couple minutes per fillet, and worth it so the scales don’t get stuck in your teeth), unless you’re making it on the grill. I found the higher heat of the grill makes the scales unnoticeable! And if this is a flavor you like I’d also suggest making a jar full of homemade blackened seasoning so you don’t have to mix together all the spices every time.

Once the scales are off and the spices are blended, the salmon is ready to eat in less than 10 minutes. That’s what I call a quick dinner!

What is blackened seasoning?

If you’re not familiar with blackened seasoning, it’s a classic Cajun spice blend commonly used on fish and chicken. The spice blend and blackening technique was popularized in the 1980s by Chef Paul Prudhomme of K-Paul’s Louisiana Kitchen in New Orleans with his blackened redfish recipe.

Blackened seasoning is a little spicy (however spicy you want, since you’re mixing the seasoning yourself!) and gets nice and toasted when you sear your meat in a cast iron skillet. I’m basically addicted to the stuff now. My new favorite way to use it is this blackened grouper sandwich — such a great combination!

I’ve been using it in all kinds of recipes, not just blackened salmon! (okra and tomatoes, for example, or a cajun shrimp and sausage vegetable stir fry I just had this week – YUM!)

I’ve already gone through about a jar and a half of blackened seasoning since I posted the recipe a few weeks ago! Having a jar handy instead of having to mix up the spices every time I make blackened salmon shaves off that extra bit of prep time.

Plus, I don’t have to use measuring spoons — just sprinkle on top of the salmon fillets until they’re well-coated.

How to make blackened salmon

Chef Paul Prudhomme’s blackened redfish relied on a very simple technique of first dredging the fish in melted butter (never a bad way to start a recipe), and then coating it with blackened seasoning. And that’s exactly what we’ll do for the salmon!

I drizzle the butter over the fleshy side of the salmon fillets, then flip them over and swirl the tops around in any excess butter that’s on the plate to get them nice and evenly coated in butter.

Then, I spoon plenty of blackened seasoning over the fleshy side of the salmon and pat it down to adhere as much of the spice blend as possible to the fish. Yum!

Then, you cook the salmon in a preheated cast iron skillet with a little drizzle of olive oil, or on a searing hot grill on a grill mat to prevent the fish from sticking to the grates.

A quick sear of 2-3 minutes on the fleshy side (or 1-2 minutes if cooking on the grill) is just enough to form a nice toasty crust on the top, and finishing it off with an additional 5-6 minutes on the skin side cooks it through while giving that unparalleled crispy skin I can’t get out of my head.

Blackened salmon is very quickly rising in the ranks as the most frequently-made salmon recipe in my house.

If you haven’t tried eating crispy skin-on salmon or making it at home, you have GOT to give this recipe a shot. Let me know how you like it! Enjoy!

On the grill (recommended)