With ample seasonings and just a little kick, creamy Southern pimento cheese is great with everything from crackers or burgers to crab cakes or grits! This cheddar cheese spread also makes a great cold party appetizer dip that doesn’t require the oven. 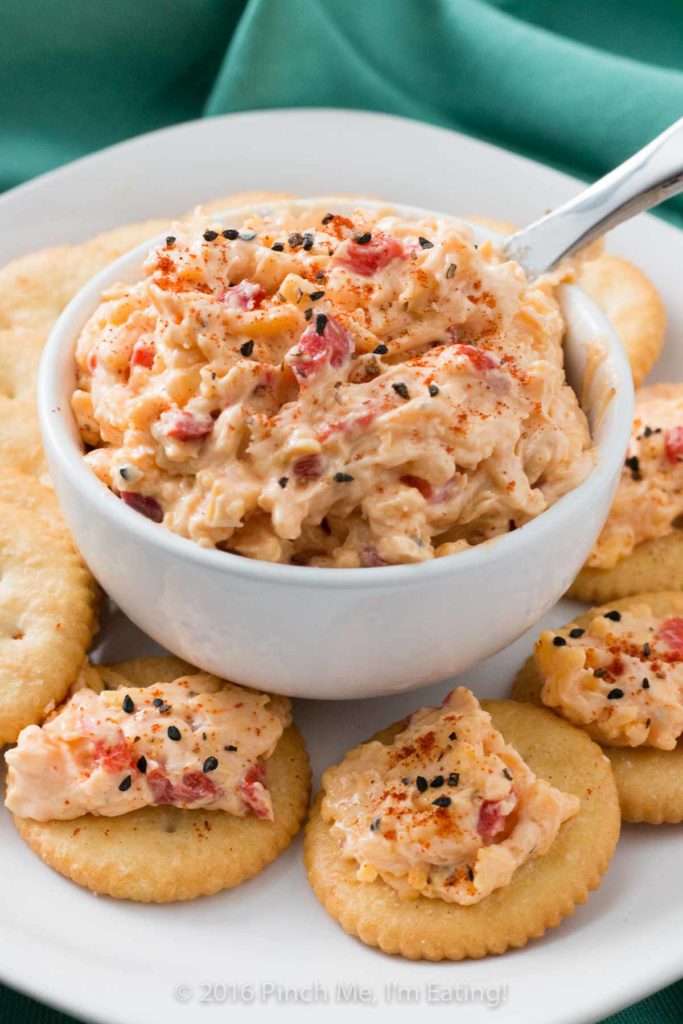 Watch the video to make it here!

Let me relay to you a conversation I’ve had more times than I can count. It goes exactly the same way every time.

“Are you from here?”

“Have you always lived here?”

“My whole life.” (or, nowadays, I might qualify that by saying I went to Arizona for college and then came back.)

“Where are your parents from?”

We’re in South Carolina, and they just can’t place my neutral accent until we have that conversation. 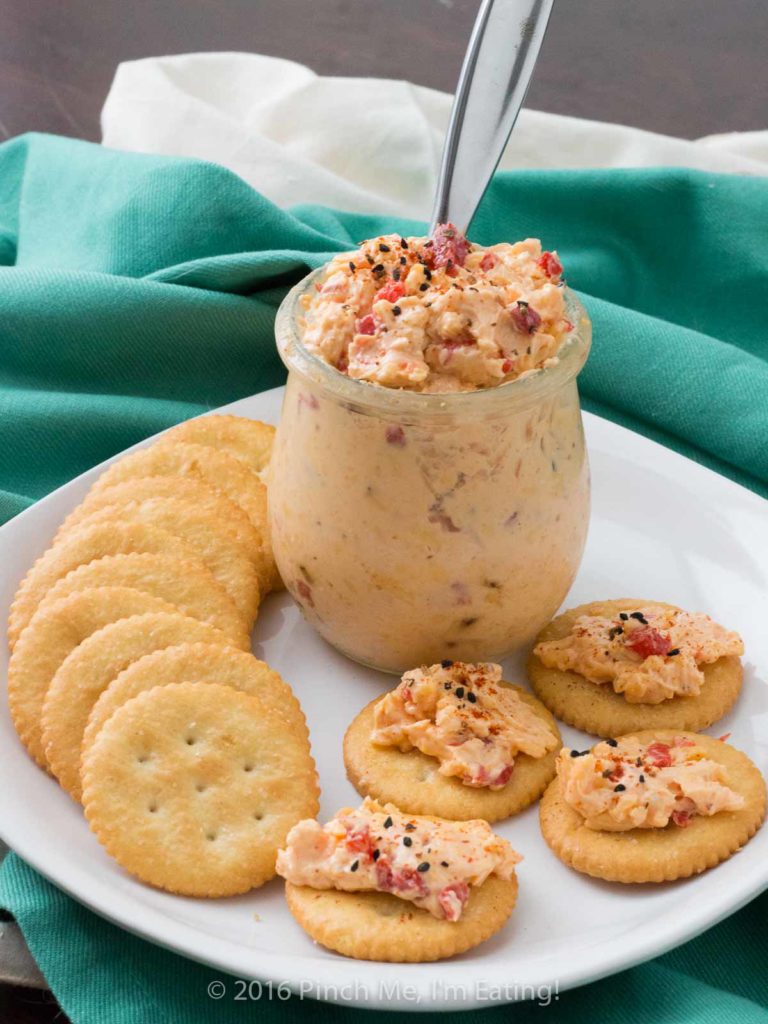 When my parents were newlyweds, they decided they wanted to move from Michigan to the East coast. They marked a bunch of cities on a map and took a road trip, stopping in each one to get a feel for the city.

When they got to Charleston, they knew it was the one. And I can’t blame them.

I’ve been proud to call Charleston my hometown and South Carolina my home. And I think the fact that I very easily could have not been born here, or in the South at all, makes me appreciate and embrace it all the more.

And so the South has had much more of an impact on my culinary taste and repertoire than I’ve even realized until I started this blog.

I love my sweet tea, fried chicken, grits, and okra. In my book, no other barbecue sauce can compare to South Carolina mustard-based barbecue. The blog has featured three meat and okra gumbo, and pickled okra straight from my garden.

And today, I give you Southern pimento cheese. 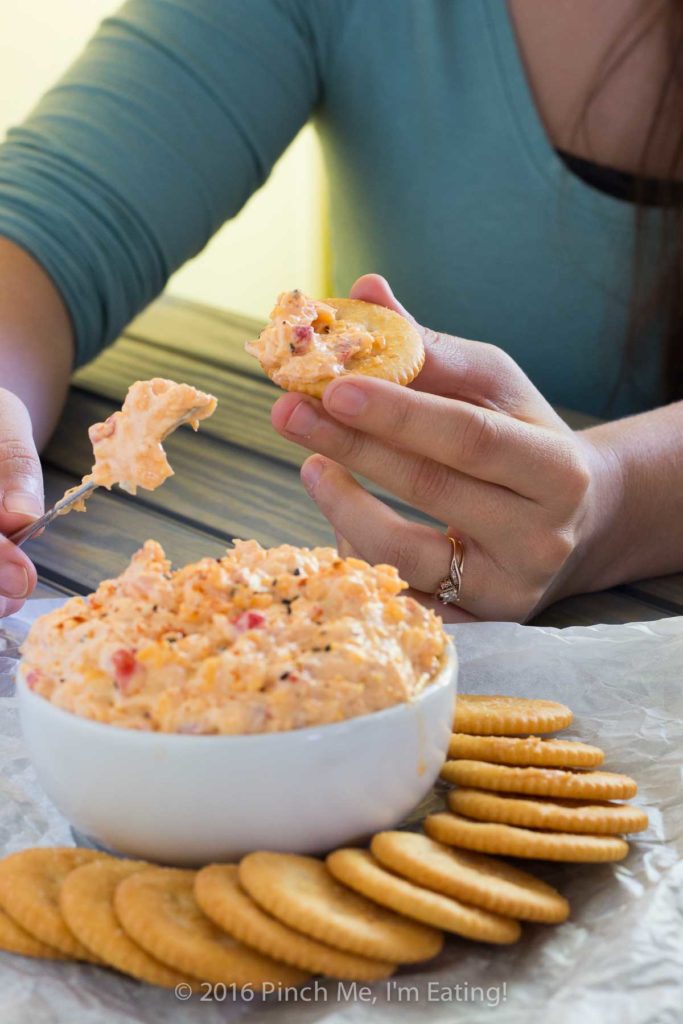 So what exactly is pimento cheese?

Well, it can be almost anything you want it to be.

It can be a cheese, a spread, a sandwich filling, or a dip.

You can put it on a burger with some bacon. You can mix it into your grits. You can simply spread it on crackers, like I’ve done here.

You can use it for grilled cheese sandwiches or dainty finger sandwiches. You can put some on top of crab cakes and broil it until it’s all bubbly.

And you haven’t lived until you’ve had a fried green tomato BLT with pimento cheese.

It’s great to bring to parties because it’s delicious cold and you don’t have to worry about having access to the oven. But if you wanted to serve it warm, it would be excellent too. 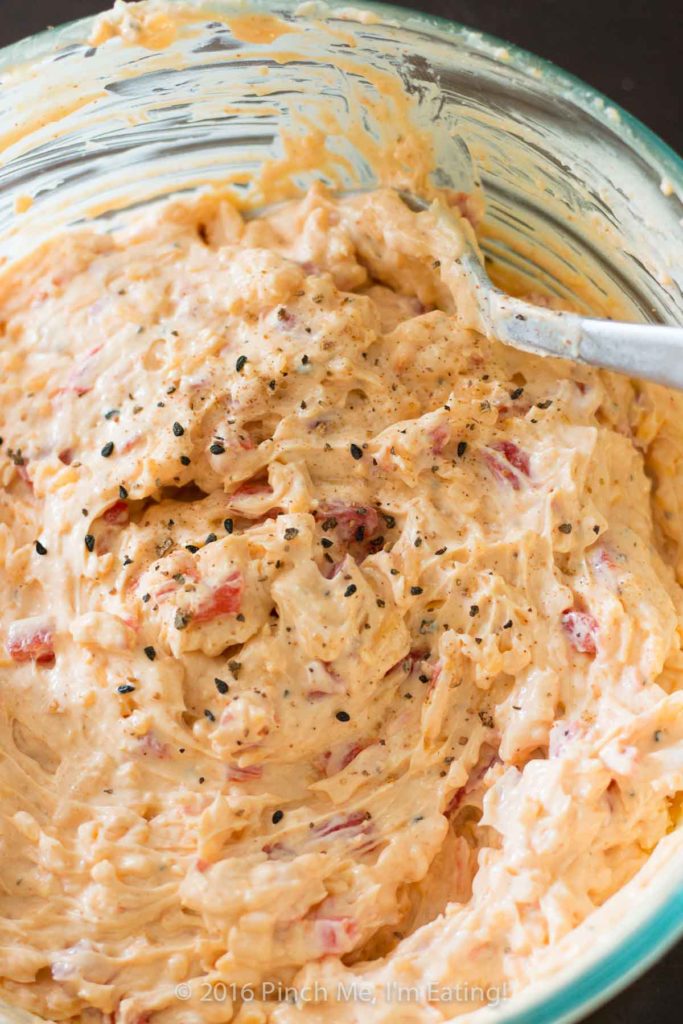 Basically, pimento cheese is shredded cheddar cheese with pimentos (yes, like the little red things in the middle of your green olives), seasonings, and something added to make it into a creamy spread – usually some combination of cream cheese, mayo, and sour cream.

I’ve had people ask me if you have to extract each pimento from a jar of olives, but fortunately it’s much easier than that. They sell pimentos in the same section of the store as the olives, in little four- or eight-ounce jars. 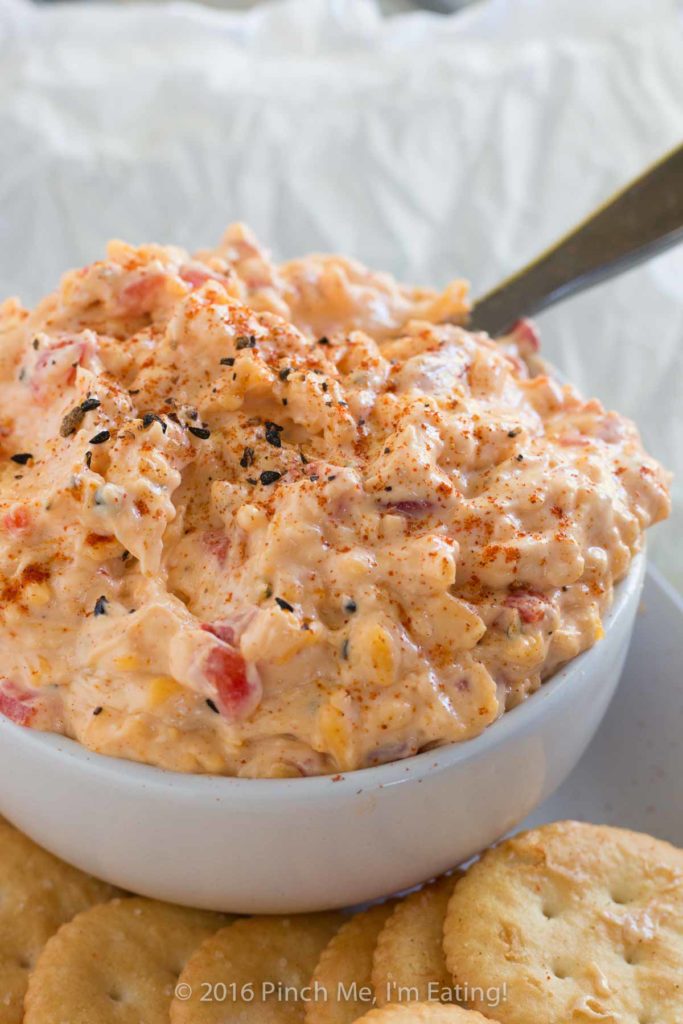 Some people use roasted red peppers, but pimentos actually begin their lives as sweeter cherry peppers rather than bell peppers, so you’re not getting exactly the same thing.

In fact, if you want to get technical about it, the pimentos you find in green olives do contain actual minced pimento, but are mixed with gelatin to make them easier to slice and stuff.

I’d say if you want to be really authentic or gourmet, you could roast your own sweet cherry peppers, but what exactly makes authentically Southern pimento cheese? Probably using the little jars of ready-sliced stuff.

Anyway, besides your pimentos, I’d use a nice sharp cheddar cheese to get the full effect. 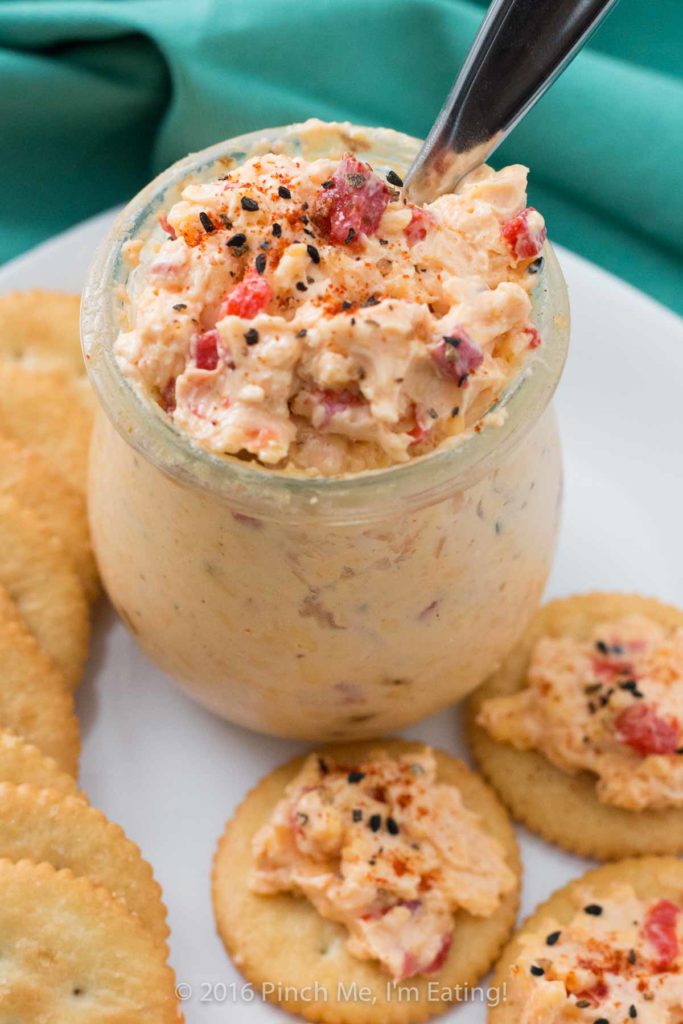 I find that many recipes have too high a proportion of cream cheese to cheddar cheese for my taste.

In my opinion, a good Southern pimento cheese should taste mostly like the cheddar. The cream cheese and mayo should be just enough to bind the cheddar together and make it creamy, but should not dominate the flavor.

So rather than using a full block of cream cheese for two cups of cheddar, I only use half a block. 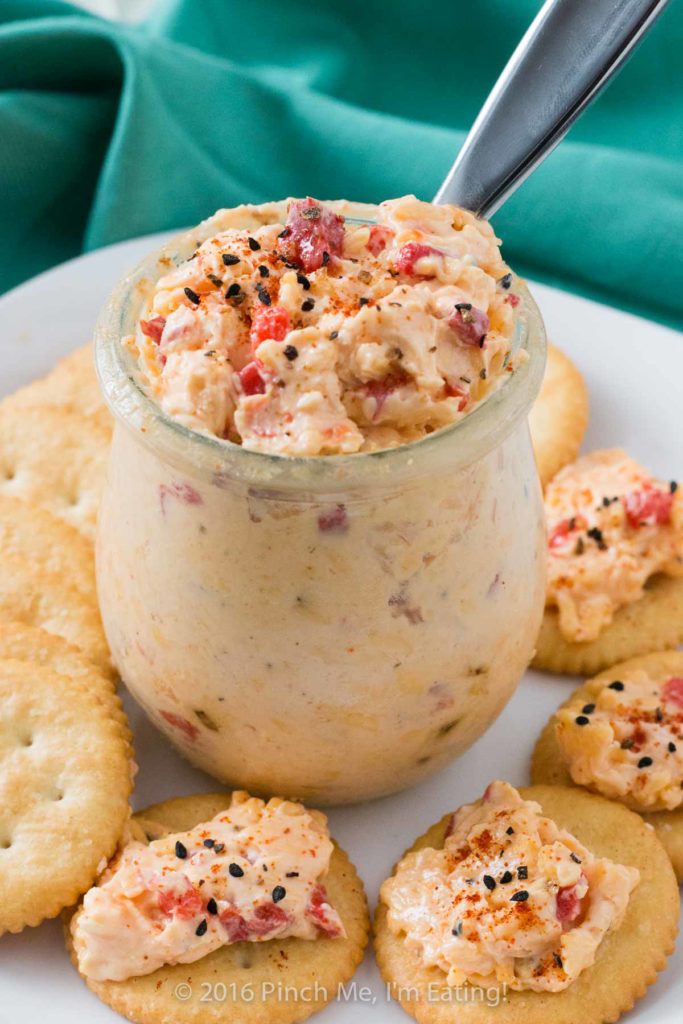 I like mine to have ample seasonings and a little kick. Mike’s number one comment across all my recipes is that “it could use a little kick” and suggests adding cayenne pepper to almost everything.

So, this recipe has a little cayenne in it, but feel free to add more to taste. Do taste it first though before adding more.

This Southern pimento cheese is an easy and delicious way to get a little taste of the South, even if you don’t live here (but it might make you wish you did!). 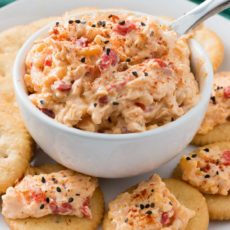 Serve with crackers, mixed into grits, on a grilled cheese sandwich, on a BLT, with fried green tomatoes, over crab cakes, or as a hamburger topping.
Tried this recipe?Mention @pinchmeimeating or tag #pinchmeimeating on Instagram! 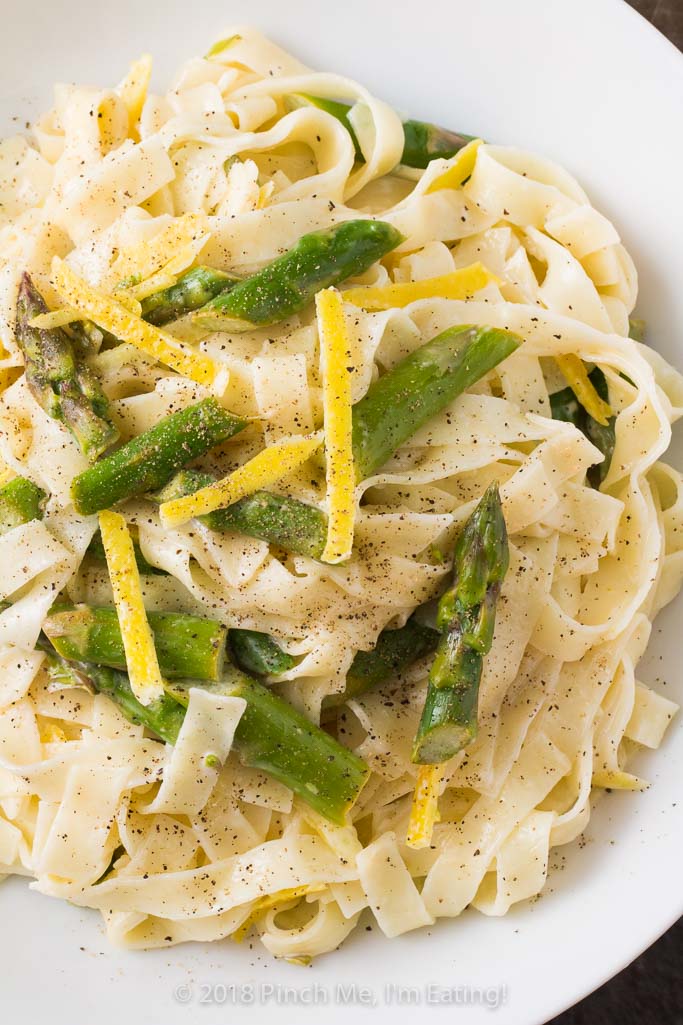