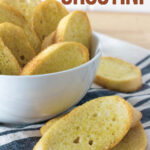 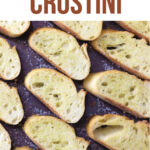 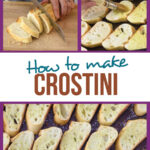 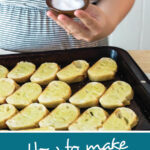 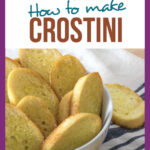 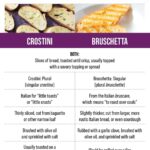 Learn how to make perfect crostini that’s crisp on the outside and tender on the inside. These little toasts are just right for loading up with your favorite toppings or serving alongside a dip or spread!

This post has been a very long time coming! Seriously, I’ve had this outlined in my drafts for over a year, recipe ready, photos taken and edited, and for some reason it never got written.

Well, that’s about to change, because we all need a little more crostini in our lives, and we need it NOW!

Forget Taco Tuesdays: How about TOAST Tuesdays? Can we please make this a thing?

I could seriously eat crostini every week and never get tired of it. You can mix up the toppings every time and never have the same one twice if you wanted.

First things first: what are crostini?

Basically, crostini are small, thin slices of bread (usually a baguette or similarly-shaped Italian loaf), toasted or grilled until crisp, and served as an appetizer with various toppings or spreads.

They’re also a must alongside a cheese and charcuterie board, and are great for serving with a hot dip.

Essentially, crostini is just toasted bread, so making it couldn’t be easier. You just slice a baguette or other long, narrow loaf of bread, brush some good olive oil on each side, sprinkle one side with kosher salt, and toast it in the oven.

I tested three ways of toasting crostini in the oven: first, baking at 375 degrees for 8-10 minutes, baking at 425 for 6-8 minutes, and then broiling for 2-3 minutes per side. How you choose to make it is up to you, but please note each method has slightly different results.

Baking crostini at 375 degrees Fahrenheit yielded a result that is crispier throughout, like a crouton, and is perfect to use for more moist toppings or with soup.

Baking at 425 and broiling yielded similar results and were the preferred option in my highly scientific taste test of me and my husband. It was crispy on the outside and tender on the inside.

I recommend the 425 degree method, since people’s broilers can be different and broiling can require pretty constant oversight to make sure it doesn’t burn.

Crostini vs. bruschetta: What’s the difference?

Crostini and bruschetta are very similar, so much so that many people use them interchangeably. After all, they are both Italian in origin, and are essentially the same substance: toasted pieces of bread, usually topped with something savory and delicious.

You can use them interchangeably and I won’t be mad.

But, since you asked, I made you a handy chart, because I love charts and spreadsheets.

The literal meaning of crostini in Italian is “little toasts” or “little crusts”. The word bruschetta comes from the Italian bruscare,  which means “to roast over coals,” and refers to the bread and method of toasting. It is typically made from a larger, more rustic Italian bread, or even sourdough, and is usually rubbed with a clove of garlic, brushed with olive oil, and salted.

Crostini are smaller, cut from a baguette, and are just oiled and salted (although I sometimes like to sprinkle a little garlic powder on mine depending on my mood!).

If you had one big, grilled slice of toast with toppings on it, that’s a bruschetta. Crostini, on the other hand, are more suitable for appetizers and canapés that are handheld and can be eaten in a few bites.

Even the pluralization of the words we use can clue you into the typical usage. Bruschetta is singular (plural bruschette), so you only need one big ‘un. Crostini is plural, (singular crostino) so you would typically be eating many of them.

For the best crostini, use a baguette or other long, narrow loaf with medium density.

I’d avoid baguettes that are too crusty on the outside unless you are planning to make your crostini the same day, or they can get almost too hard to cut and result in tooth-shattering toasts. I do have a trick for reviving a hardened baguette below, in the troubleshooting section.

Softer baguettes and narrow Italian loaves, on the other hand, can stay fresh for several days.

Can crostini be made ahead of time?

You can make your crostini several days in advance and store them in an airtight container at room temperature until you’re ready to use them. Make sure you wait until they’re fully cooled before sealing them up, or they will soften and you’ll have to re-crisp them in the oven! Don’t refrigerate them, either, or they will taste a bit stale when you go to eat them later.

Can you freeze crostini?

You sure can! You can slice your bread, brush with olive oil, and then freeze. To prepare your crostini from frozen just salt and bake them in a preheated oven as if you were preparing from fresh.

While crostini doesn’t take much time to prepare from fresh, I can see prepping and freezing it being beneficial for making either large amounts or small amounts.

If you need a million of them for a big party, all the slicing and oiling in advance would save time. Conversely, if you like to just have a few for an appetizer with a dinner for two, you could just pop some frozen slices in the oven whenever you want without worrying about eating a whole baguette’s worth within a week.

Help! I was going to make my crostini yesterday and now my baguette is too hard.

If you’re using a crusty bread like a baguette and it’s become too hard to cut or bite into, there’s a clever and rather surprising hack that I’ve used before. It freaked me out a bit to try it the first time, so hear me out. This only works for crusty bread.

Preheat your oven to 300 degrees. Then — and this is the scary part — you run the baguette briefly under cool, running water. Then place it on a baking sheet and bake for 6-10 minutes. It’s like a freshly baked loaf!

If your baguette is already cut, you can still use this trick, but avoid saturating the cut end of the loaf.

I’ve overtoasted my crostini. What do I do?

First, let’s talk about why that happened. If you cook your bread for too long or at too low of a temperature, it will slowly dehydrate more than just toasting on the surfaces, creating tooth-cracking croutons that are far too crispy to be enjoyable, and will leave your guests with flakes and crumbs of bread down the fronts of their shirts.

Cooking at a higher temperature for a shorter time or even putting it under the broiler (keep a close eye on it if broiling!) will help keep this from happening.

If your crostini did end up too crunchy, you can put a moist topping on it (like diced tomatoes or pesto) and let it sit for a while to soften.

Looking for ideas of how to top your crostini? Here are a few crostini appetizer recipes to take your canapé game to the next level!

And some more recipes for you!

What to serve with crostini

If you’d rather serve your crostini alongside a dip or spread, here are some ideas to get you started!

And some more ideas!

A Cheese and Charcuterie Board

Learn how to make perfect crostini that's crisp on the outside and tender on the inside. These little toasts are just right for loading up with your favorite toppings or serving alongside a dip or spread!
Print Recipe
Course: Appetizer
Cuisine: Italian
Servings: 30 slices
Calories: 44kcal
Author: Caroline Lindsey
Prep Time:5 mins
Cook Time:6 mins
Total Time:13 mins

For a more crouton-like consistency, bake at 375 degrees Fahrenheit for 8-10 minutes. This is good for topping French onion soup or for more moist toppings like tomato bruschetta topping.
Tried this recipe?Mention @pinchmeimeating or tag #pinchmeimeating on Instagram!