Skip to content
318 shares
Jump to Recipe Print Recipe
For an easy and elegant appetizer, serve homemade crostini with brie and fresh blackberries. Prep time is only five minutes but the flavor is unforgettable! 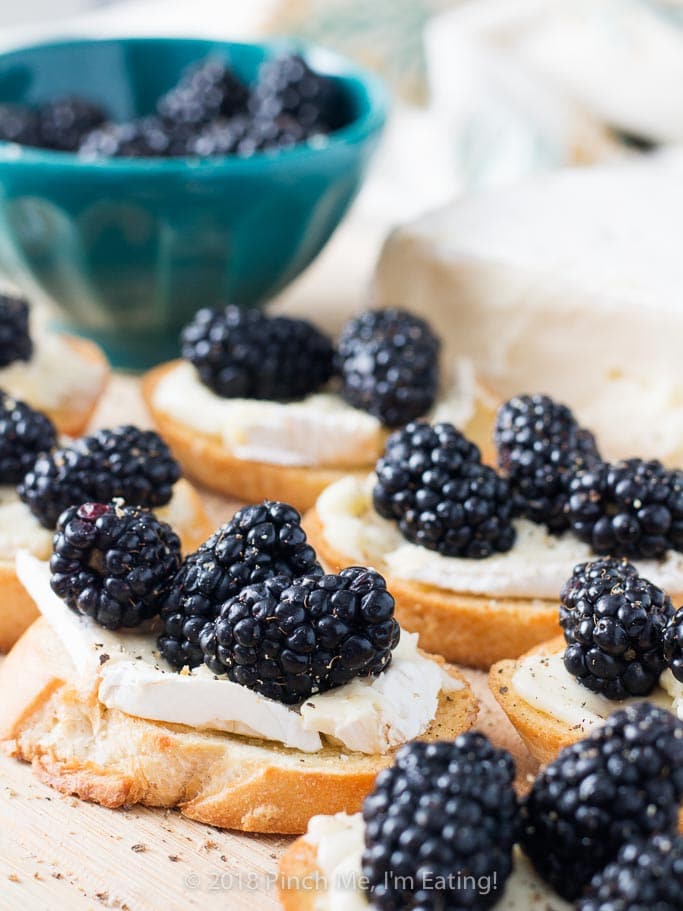 When you’re having people over for dinner or just to hang out for a bit, it’s nice to be able to give them a little something to nosh on when they arrive.

But that doesn’t mean you have to spend hours preparing a complicated appetizer — not when you’re making crostini! All you have to do is gather some quality ingredients and toast a little bread. 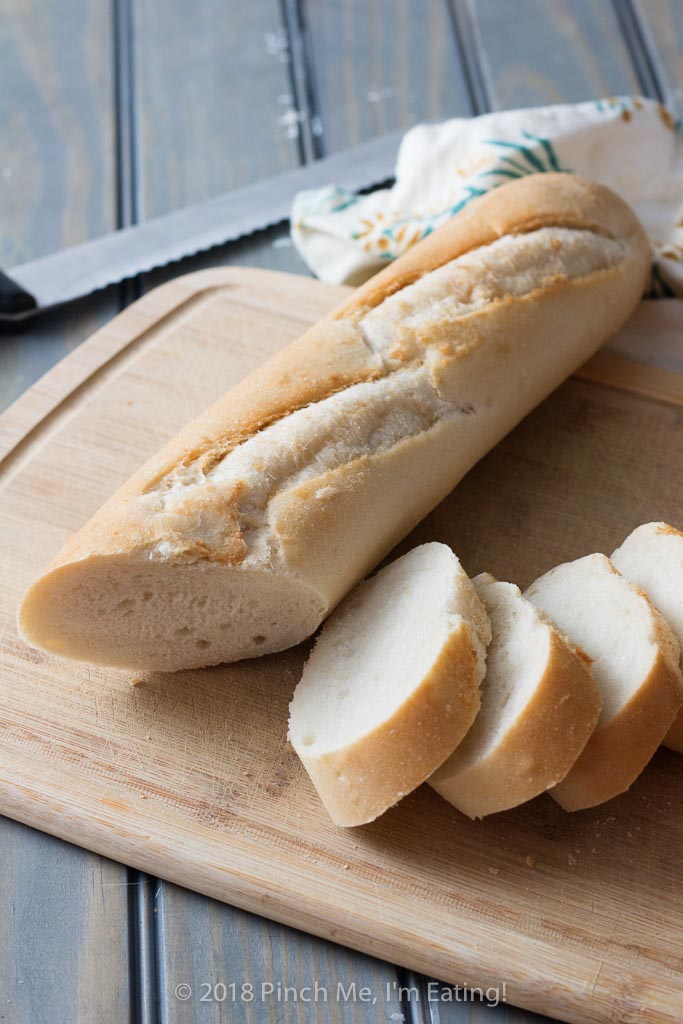 There are so many things you can do with little slices of toasted baguette or French bread. Top with fresh tomatoes, mozzarella, and basil, or serve alongside some herb-infused ricotta cheese or a nice olive tapenade. A couple of my other favorite crostini recipes are this ricotta crostini with blueberries, walnuts, thyme, and honey and this fig and olive tapenade crostini with walnuts. Talk about flavorful! 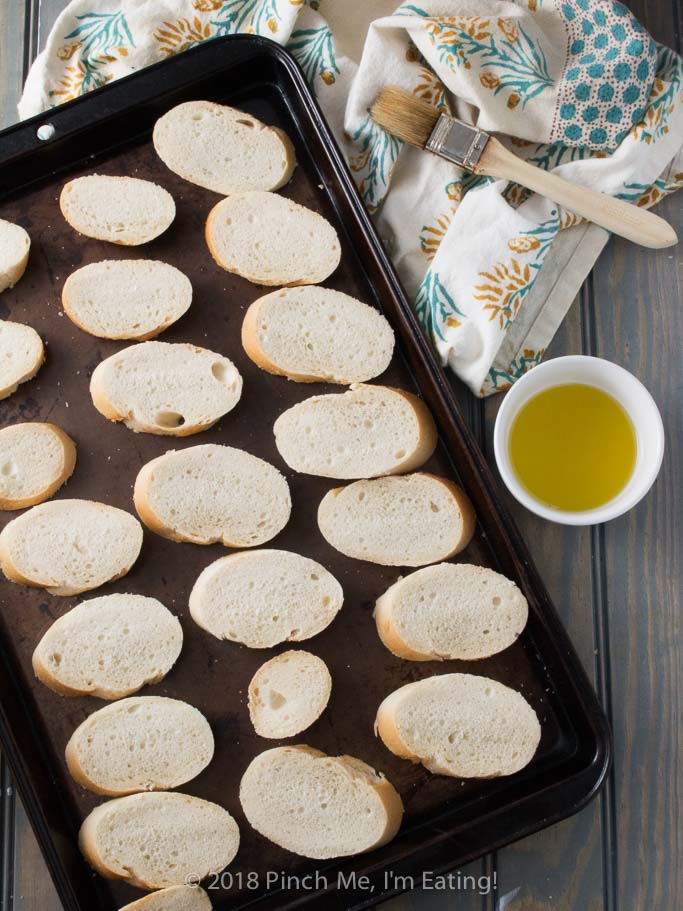 This recipe for crostini with brie and fresh blackberries, like most crostini recipes, is all about showcasing the ingredients: freshly baked bread, a robustly-flavored olive oil, the creamiest brie you can find, and blackberries bursting with sweet juice.

The elements come together as a whole that is so much more than the sum of its parts. Contrasting textures and flavors — crispy, creamy, juicy, sweet, and salty all at once — leave you savoring every bite and craving more. 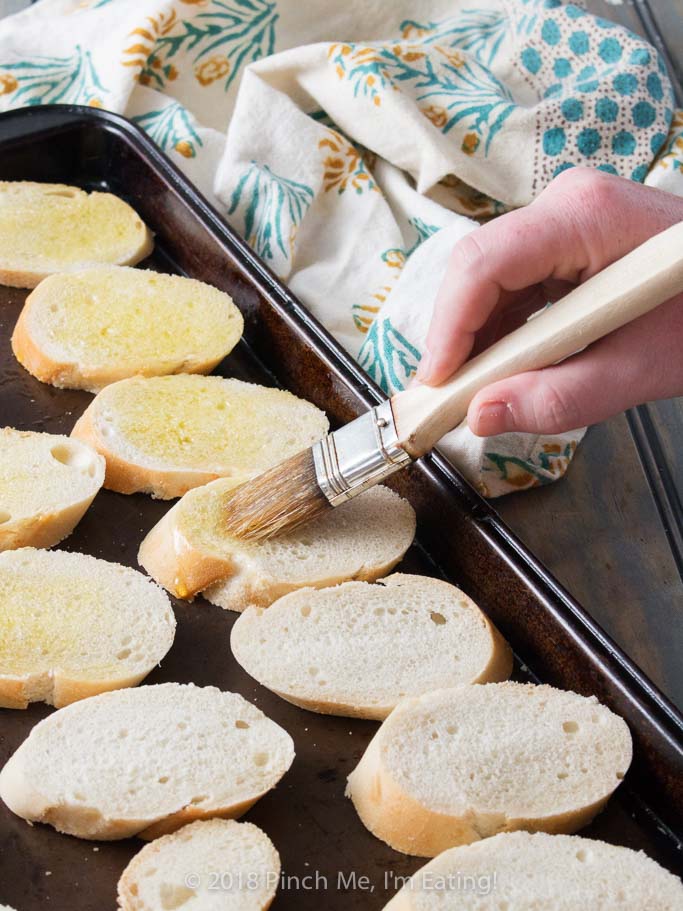 This recipe comes with a warning: you and your guests may want to skip dinner altogether in favor of more of this crostini with brie and blackberries! (And that is a perfectly valid option. I won’t judge.)

My friend Kelly came over to cook with me, have a quick photography lesson, and be my hand model in these photos. Fortunately she got to eat a few crostini before she left, but I’m not gonna lie — as soon as she walked out the door to go home, my husband and I could not get the rest into our mouths fast enough. 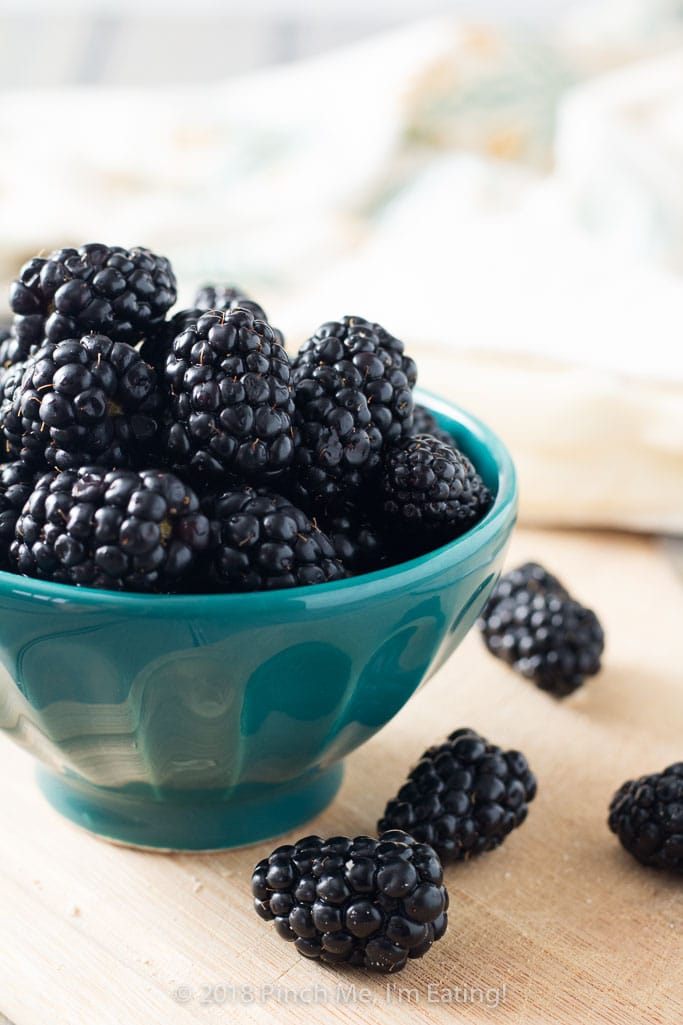 I think we devoured the rest of the crostini and the whole wedge of brie in about five minutes flat. I’m not even sorry. We were not nearly as elegant as the appetizer itself, but hey — there’s only so much self-control I have around triple creme brie.

For crostini as simple as this one (only two ingredients on each slice), I like to take the easy way out. I assemble a plateful of the appetizers — maybe about eight of them or so, or enough for each person to have about two already made — and then just serve the rest of the toasted bread in a bowl next to the rest of the ingredients. 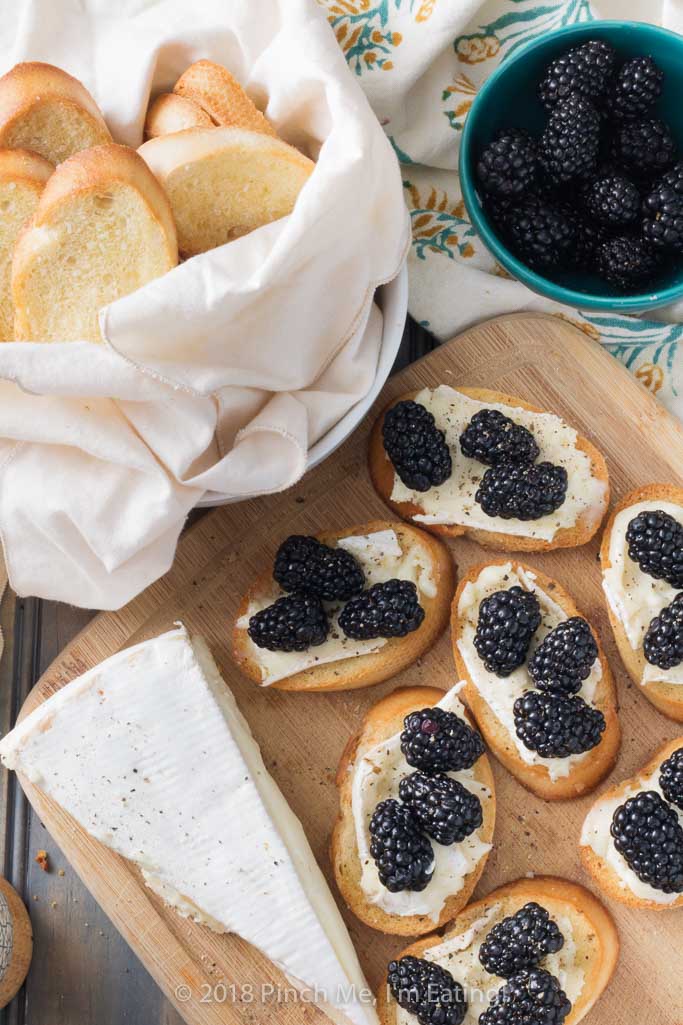 I served the readymade crostini on a cutting board along with the brie and a cheese knife, piled the blackberries in a cute little bowl, and wrapped a napkin around the bread in a bowl to keep it warm. That way people have an immediate snack and know essentially what the final product is supposed to look like, and they can assemble the rest themselves.

It’s a win-win — you don’t have to spend the time putting them all together or find a serving tray large enough to hold them all flat. One plate’s worth is plenty, and a couple bowls don’t take up much room.

And your guests have something to do with their hands and take some ownership of their appetizers, so if they want an extra blackberry on this one or just the cheese on that one, they can be the artist of their own appetizer! 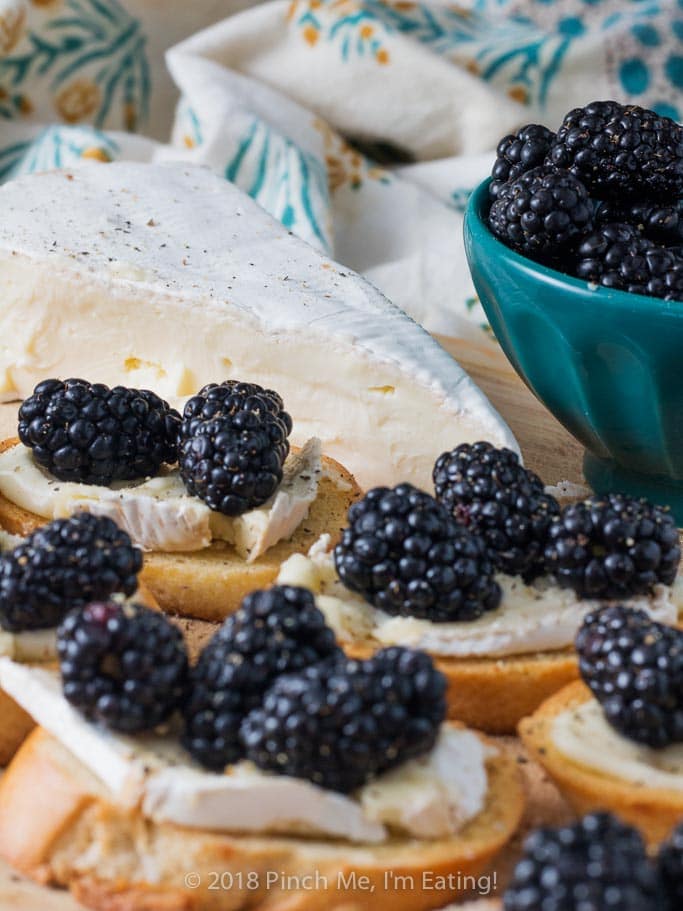 So throw your caution to the wind and make this crostini with brie and blackberries next time you have guests over or just want a moment of indulgence for yourself! Totally worth it. Enjoy! 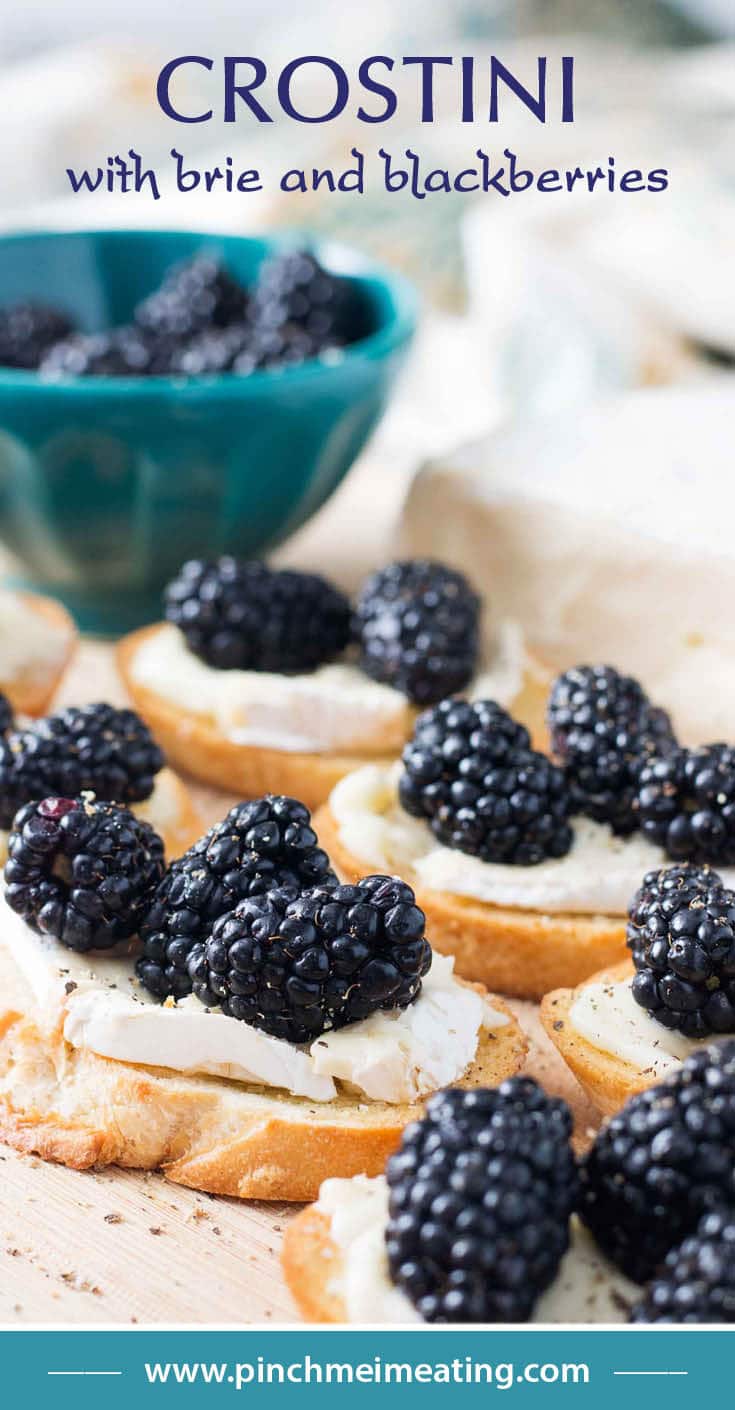 For more delicious crostini ideas, check out these recipes: 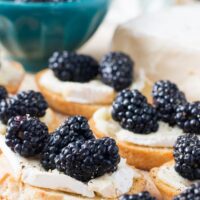