Making French onion soup from scratch is easier than you think —  it just takes a little effort and lots of patience, and its simple ingredients yield a complex flavor you won’t forget. It is a classic dish that works well as either an appetizer or a light dinner.

This post kicks off the first (and hopefully annual) Novel Recipes series hosted by yours truly at Pinch Me, I’m Eating!

Novel Recipes is a collaborative collection of posts from food bloggers highlighting recipes that are featured in fiction and memoirs. Each post includes a book review and a recipe from the book. See the full reading list with links to each post here! 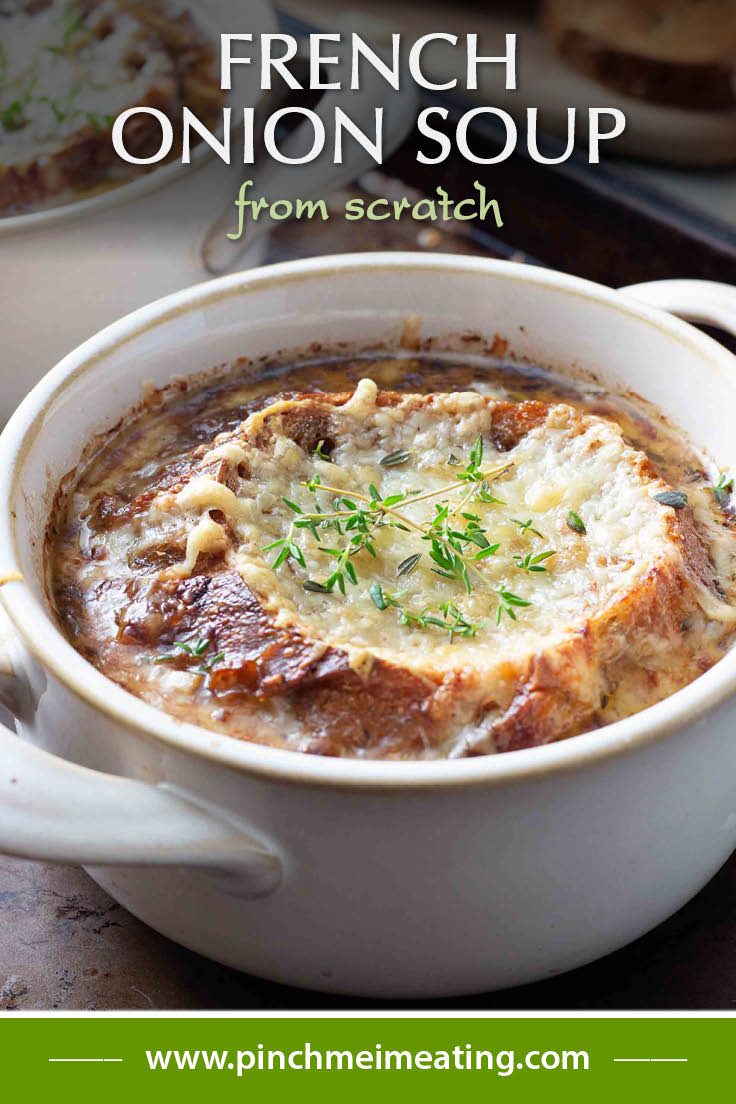 This post contains affiliate links. If you make a purchase through one of my links I will get a small commission, but you won’t pay any more!

The book: Kitchens of the Great Midwest

I stumbled upon this book by accident — looking for a new (cheap) read, I saw a description for this book in one of my daily book deals emails and, as a foodie, thought it looked interesting. And for only a couple bucks, I decided it would be good enough for my next read. 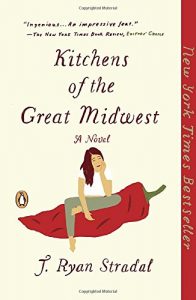 But as I read the book, I became more and more intrigued. After I finished, I couldn’t stop thinking about it. And the longer it sits in my head, the more I appreciate its brilliance.

This book is structured unlike any book I’ve read before. Each chapter is a glimpse into the life of a different character. While narrated in third person, each one has a distinct voice and personality. While some may have previously made an appearance in the story, others you meet for the first time at the beginning of their chapter.

And just as you start to get into their story, often at a climactic moment, their chapter ends and you are transported to another narrator and another time, sometimes years down the road. Sometimes you find out (eventually, and in a roundabout way) what happened to the previous person, and sometimes you don’t.

So with all these seemingly-disconnected people and fragments of stories, how does the book tie together? A single character, Eva Thorvald, is a common thread in all the chapters, sometimes as a major player and other times appearing only briefly.

Kitchens of the Great Midwest is the story of Eva Thorvald through defining moments that shape her culinary development, from her birth until she becomes the legendary chef behind a world-famous pop-up supper club with a years-long waiting list. It’s also an exploration of family relationships and an honest look at the struggles and hardships people encounter — each and every one of us, no matter our walk of life.

While I love the main plotline and the characters, something that especially spoke to me was the underlying theme about our relationship with food and the unique ability of food to reflect our identity and community.

Each chapter, while a brief look into a different person’s life, is also the story of an ingredient or food and how it becomes part of Eva’s personal story. As an added bonus, some of the recipes mentioned (including this French onion soup) are included right within the chapters!

I resonated with Eva Thorvald because for me, food is autobiographical. Like hers, my own story is intertwined with the foods I’ve encountered throughout my life. Food can be a snapshot of an experience and a way to relive a memory, perhaps even more than a photograph can. It can be a way to travel or daydream from the comfort of our own kitchen. Or foods may hearken to a place, culture, or way of life.

No food is off limits for Eva Thorvald – while she thrives on the freshest and most seasonal foods, she isn’t too pretentious to feel nostalgic over a good old fashioned peanut butter bar (and yes, that recipe is in the book too!).

I can’t say much more without giving away the experience of the book, but I will say it is brilliantly written and one of the best books I’ve read this year!

In Kitchens of the Great Midwest, this French onion soup appears when Eva is in high school and she is in the early stages of her interest in cooking. Will Prager, a boy who has a crush on her and the main character in this chapter, asks her about her plans for the evening one day.

When she tells him she is planning to make French onion soup with her dad, he goes home and looks up a recipe. Prager is amazed at the complexity and strictness of the recipe (“Use Gruyere from Switzerland, or you’ll be wasting your time,” the recipe states.) and becomes even more fascinated with Eva, deciding it would be befitting to take her on a “culinary adventure” for their first date. 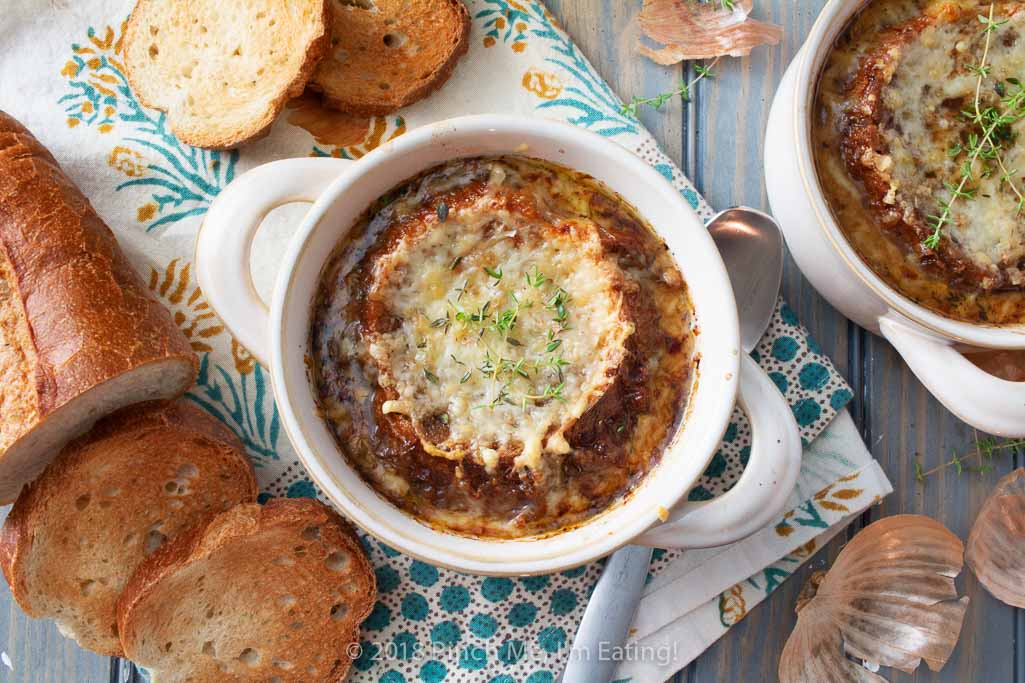 I made this French onion soup and while it takes a good deal of patience, it is not too difficult and is quite delicious. Any recipe that involves caramelizing onions will take a while (in this case, almost an hour just for that step), but that is the most time-consuming part of the recipe. 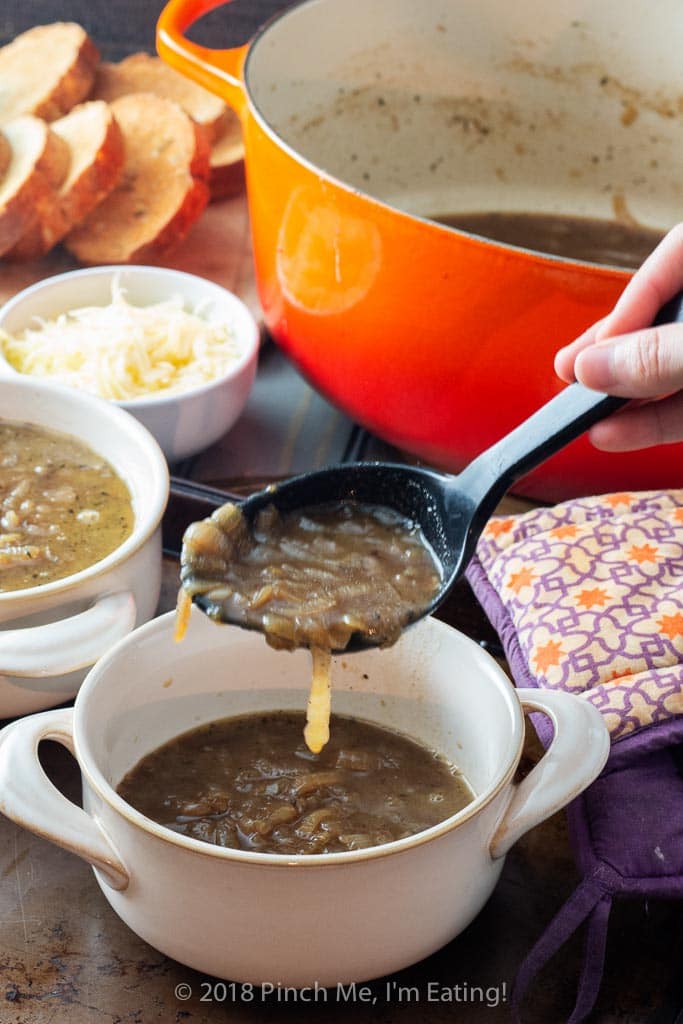 If you’re not familiar, French onion soup is a rich soup of caramelized onions and beef broth, topped with a slice of toasted French bread and plenty of grated cheese, and popped in the oven until the cheese is all bubbly. 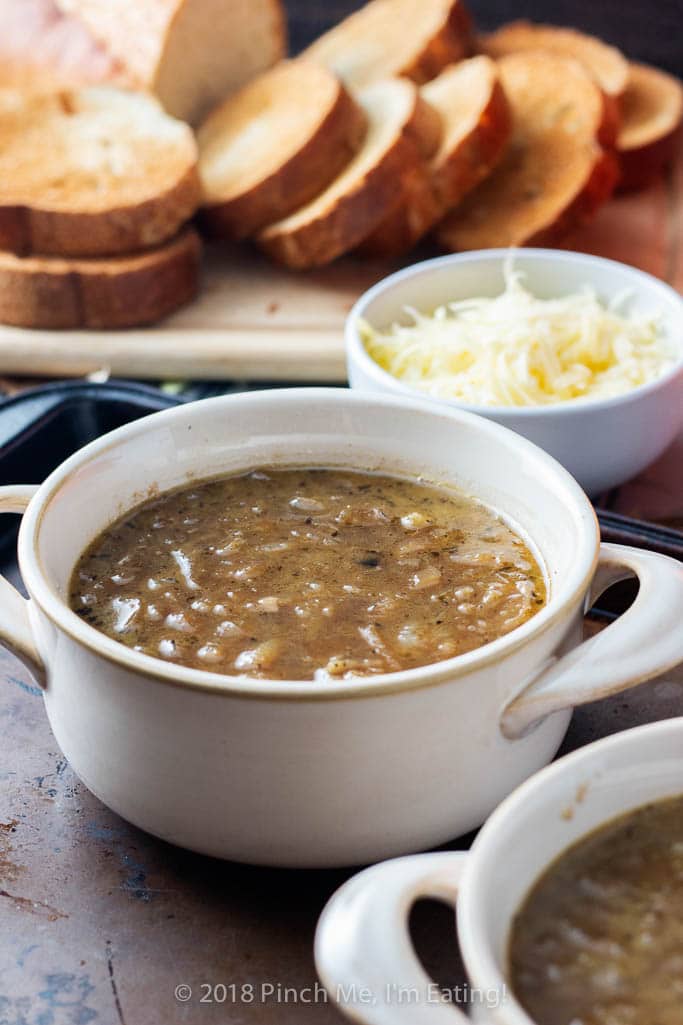 It’s almost like the creme brulee version of soup, since you get to crack through the layer of toast on top with a spoon to reach the soup below. And having a bite with a little of everything — cheesy bread and soup together — is just the best. 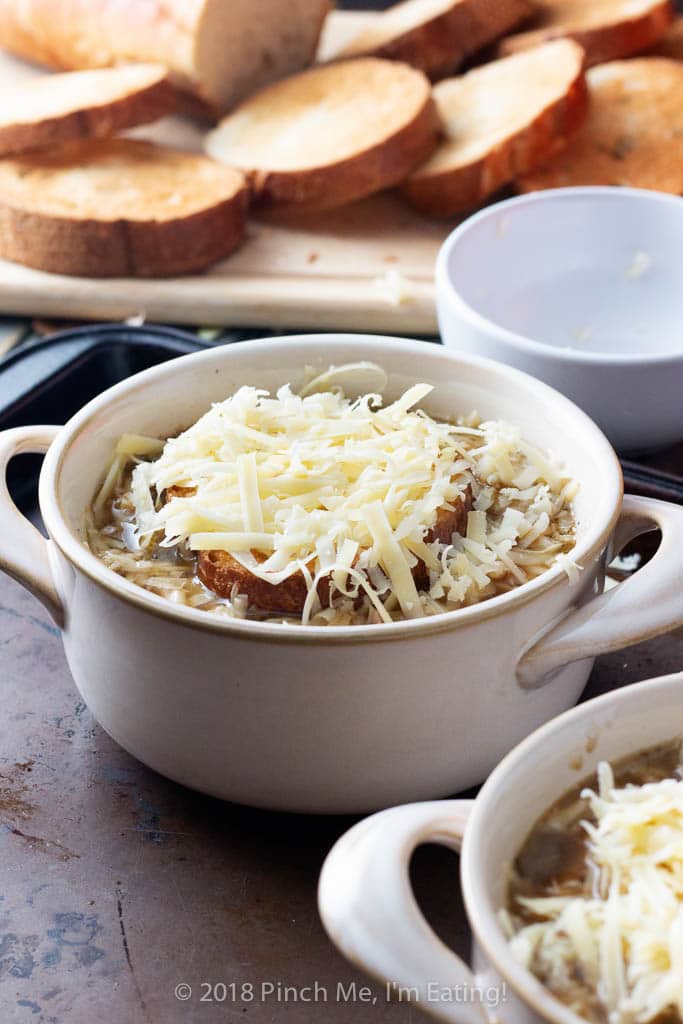 It was a lovely recipe, full of caramelized onions adding just enough sweetness to a rich base of beef stock and rounded out with some thyme and a bay leaf. We did, in fact, use Gruyere from Switzerland and it was delicious, although I can’t compare it to any non-Swiss Gruyere!

I do have a couple modifications to the recipe as it is printed in the novel, first of which is the number of servings. The novel says this recipe serves 8, but the full recipe divided perfectly between two individual-sized soup crocks for me. If you were serving this in small ramekins as an appetizer, it would probably serve 4. 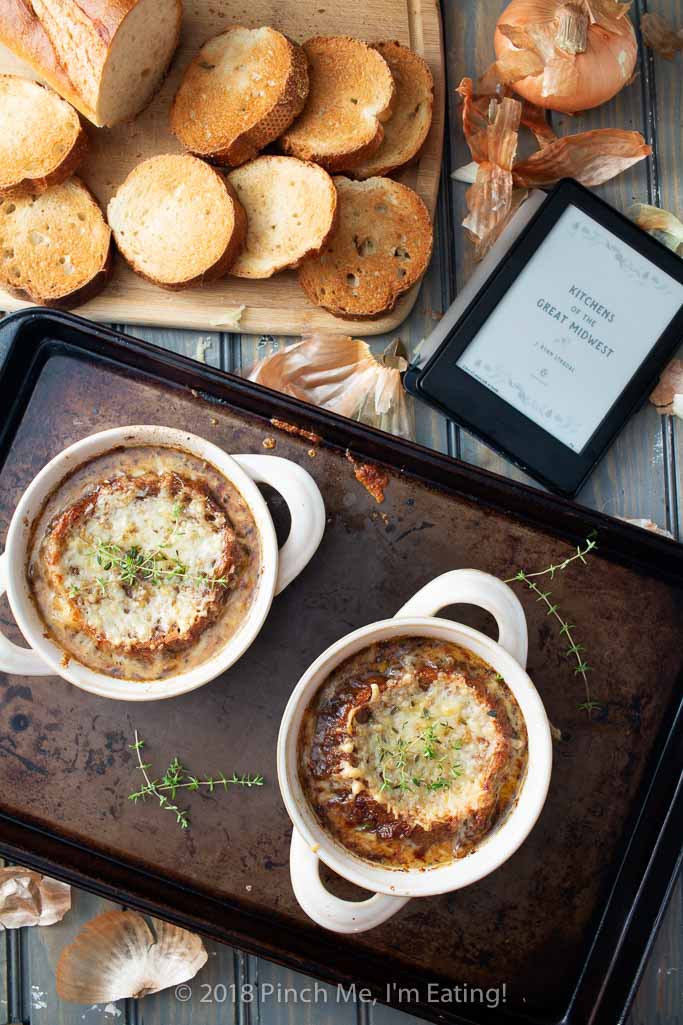 The second modification has to do with the caramelizing of the onions. I admit I haven’t made caramelized onions many times before, and I initially followed the instructions in the book.

Thinly slice five medium onions, cook over medium for 15 minutes, then turn to medium low, cover, and cook for another 30-40 minutes, stirring frequently. The problem here was the direction to cover the onions. 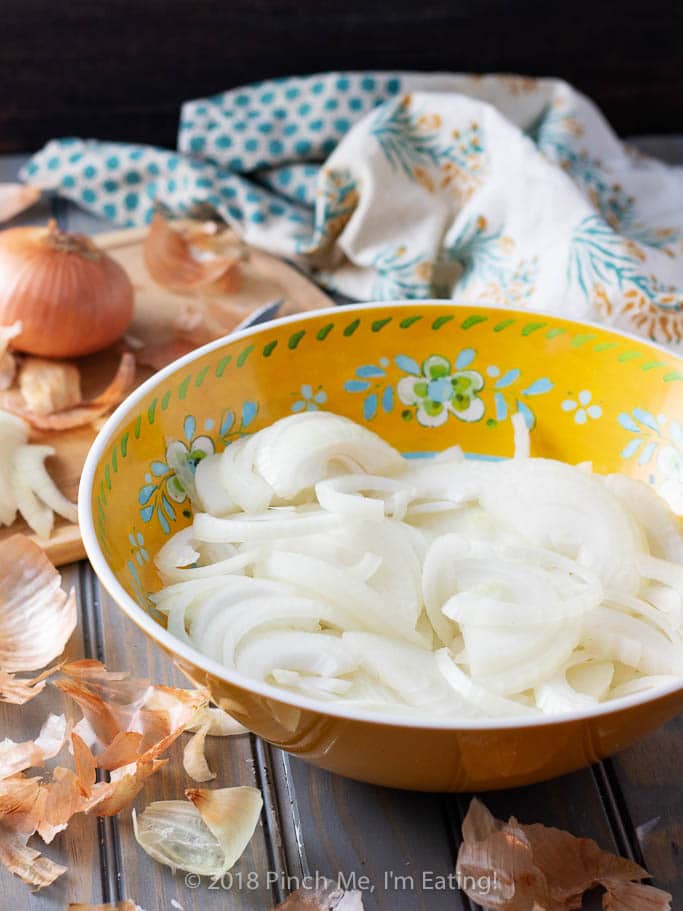 I was using my enameled Dutch oven and the lid does not allow steam to escape. Another pot lid may have a vent for steam, which would help the matter. In my case, however, I stirred frequently for 30 minutes and while the onions were very cooked, they hadn’t yet begun to take on any hint of brown. Instead, they were still pale and simmering in their own juices — steaming and stewing instead of caramelizing.

The photo on the left below is after about 15 minutes covered. After 30 minutes, the onions hadn’t gained any more color and were instead simmering in quite a bit of their own juice.

At that point, I removed the lid, turned the heat back up to medium to try to evaporate most of the liquid, and the onions finally began to caramelize (above, right). Next time, I would keep an eye on the level of liquid in your onions and cover or uncover accordingly. Covering can help keep them from burning, but if you see a lot of liquid I’d uncover for a while.

The onions caramelize with the thyme and a bay leaf, absorbing that earthy, aromatic flavor throughout the whole process. Once they’re caramelized, you deglaze the pot with a little sherry (which adds a noticeable but subtle flavor!), add the beef stock, and simmer for a little while to marry all the flavors into a balanced, yet complex, dish. And the toasted bread and bubbly Gruyere cheese on top truly adds another layer of decadence. Top notch! 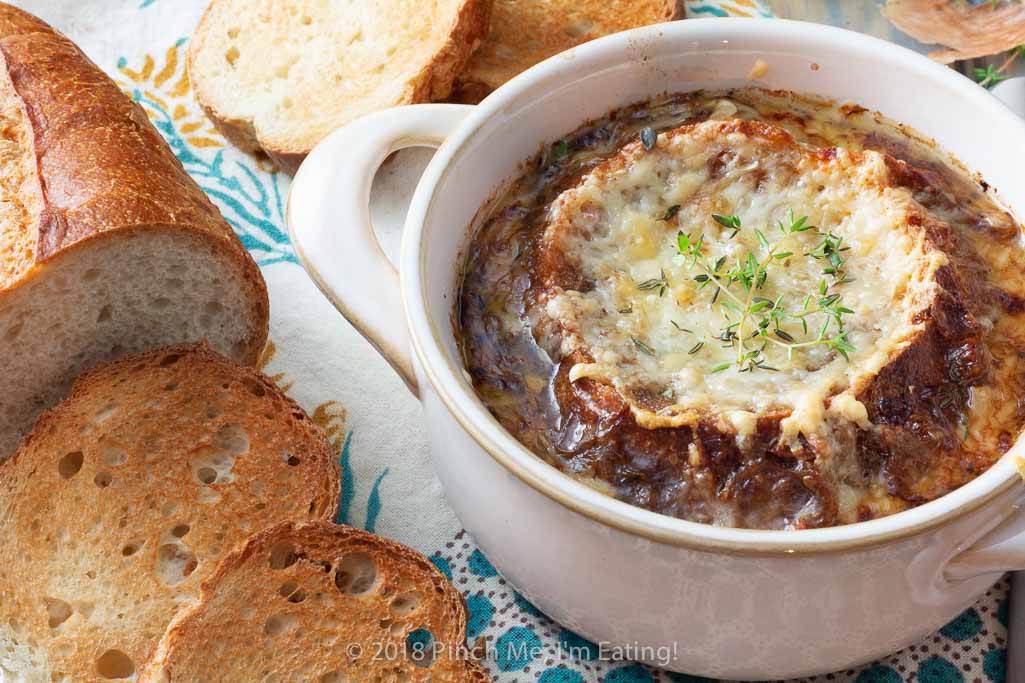 The recipe was a satisfying meal with a side of kale salad and would make for an excellent appetizer soup as well!

I’m looking forward to trying some of the other recipes from Kitchens of the Great Midwest, and if you’re looking for an interesting and thought-provoking book to read, I’d highly recommend it! 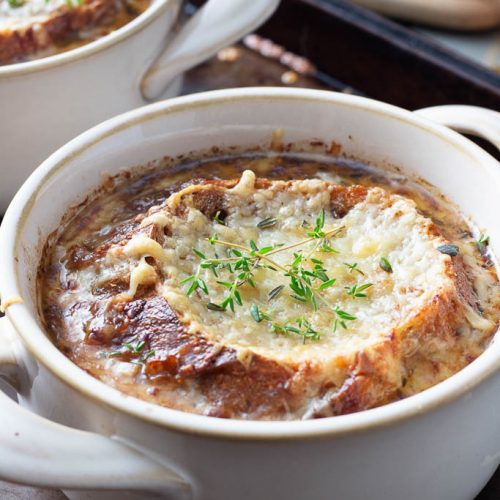