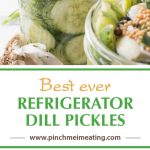 To make more than one jar, adjust the slider at the top of the recipe to however many jars you’d like to end up with!  To quickly cut even slices of cucumbers (straight or crinkle cut), you can use a mandoline like this one. You can also use a crinkle cut knife. These are not shelf-stable, so they will need to be kept in the refrigerator. They should keep in the refrigerator for about two months, if you don’t eat them all before that!  Non-reactive saucepans: Use a pot made of stainless steel, enamel, glass, or nonstick surface to make the brine. If you use a reactive material like copper, aluminum, or iron, it may leech a metallic taste into your pickles. Read more here.
Tried this recipe?Mention @pinchmeimeating or tag #pinchmeimeating on Instagram!