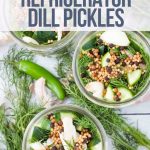 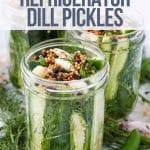 These classic small-batch spicy refrigerator dill pickles have fresh dill, garlic, and an added KICK! Make them as spicy as you like!

One of the most popular recipes on my site in the summertime is my Best Ever Refrigerator Dill Pickles — I’ve had friends request them as gifts and even had a crazy internet-famous moment where someone in real life recognized me from the blog because she had been making my pickles all summer!

They’re simple to make and scalable so whether you have just a handful of ripe cukes from your garden or are making a dozen jars you can easily make just what you need.

So I figured it was about time to add some spicy refrigerator dill pickles to the mix this year. My husband (my official taste-tester) is always saying recipes “could use a little bit of a kick” so I knew these would be right up his alley. Even yours truly, who can (and does) eat regular dill pickles by the jarful thought these were pretty darn tasty and addictive.

Adding heat to your dills

I tried a couple different ingredients for adding some spice — either dried red pepper flakes, which are nice because you probably already have some in your pantry, or some fresh peppers. Both worked but I think I liked the version with fresh peppers a bit better. I’m including quantities for either option in the recipe card so you can choose what works for you — if you’re growing peppers in your garden along with cucumbers, this would be a great use for both!

I used serrano peppers, split long-ways down the middle, but you could use another kind of pepper if you’d like. Just be aware not all peppers are created equal in terms of spice, so you may need to add more or less if you use a different kind of pepper. I used one and a half serrano peppers per jar and felt the spiciness was just enough to add a clear kick without making me reach for a glass of milk to diffuse the heat.

Serranos are spicier than jalapenos, so you may want to include more to reach the same level of heat, whereas cayenne, thai, and (heaven forbid) habanero or ghost peppers are spicier, so you’d want to reduce the number accordingly for those.

Here’s a really nice Scoville scale (which ranks peppers based on how hot they are) that includes the most commonly used peppers.

Making spicy refrigerator dill pickles couldn’t be easier. There’s no special canning equipment involved because these just sit in the fridge without being shelf-stable.

All you have to do is bring the brine and pickling spices to a boil (a mixture of vinegar, water, salt, sugar, garlic cloves, and a few whole spices) in a non-reactive saucepan.

What is non-reactive cookware?

Reactive cookware includes raw aluminum, unlined copper, and cast iron, meaning they react to acidic ingredients and can impart a metallic taste into your pickles.

Beware also of lined reactive pans (like copper with a non-reactive tin lining) pans whose linings may have scratched, exposing the reactive metal underneath.

Cut your cucumbers into spears or slices, stuff into clean pint-size mason jars along with some fresh dill and either your fresh peppers or red pepper flakes, spoon over the spices and fill the jar with brine.

My classic refrigerator dill pickles are ready to eat in about 24 hours but I found these were much better after two or even three days to fully infuse the pickles with the heat.

What kind of cucumbers should I use for refrigerator dill pickles?

My favorites to use are Kirby cucumbers, which are a classic pickling cucumber. They’re short and fat and perfect for pickle spears. I cut them into quarters, or if they’re really fat cucumbers, maybe even six spears each. Choose ones that are no longer than the height of your mason jar, or just slice off a couple slices from the ends if you need to make them fit. Then throw the slices in the jars too for good measure!

If you can’t find Kirby cukes, you can use any thin-skinned seedless variety of cucumber. English cucumbers (the super long ones you find encased in plastic wrap at the grocery store) would work, or mini seedless cucumbers, which I often find packaged in a ziplock bag or tray of multiple cucumbers.

For long English cucumbers, just cut them into the lengths you need to fit in the jar and then spear them. The mini cucumbers are really cute but they make really skinny spears. You might leave them in halves or even whole for a more substantial pickle. Just be aware leaving them whole may require a little extra time for the brine to permeate the pickles.

One kind of cucumber to avoid is anything with a thick skin and a waxy coating. That’s not what you want to be snacking on and the brine really can’t get through that waxy skin!

You can cut them into spears (my favorite) or slices for using on burgers. If you want crinkle pickle slices, you can either use a mandoline slicer with the crinkle blade attached for consistent slicing (super useful if you’re making a bunch!) or a simple handheld crinkle cutter. 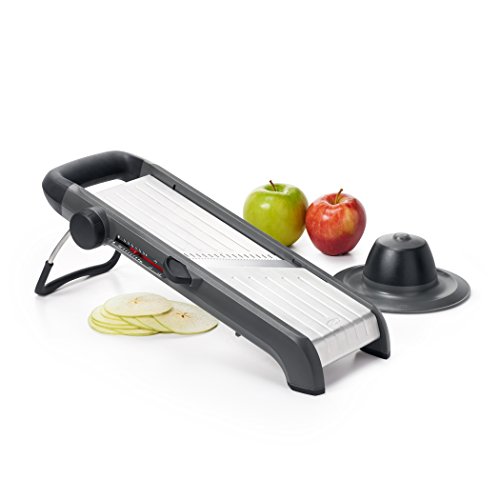 When I make crinkle pickle chips, I use a mandoline because it makes the process go so fast and the pickle chips are all a nice, consistent thickness! Just beware of that super-sharp blade. The stand folds in so it stores flat! 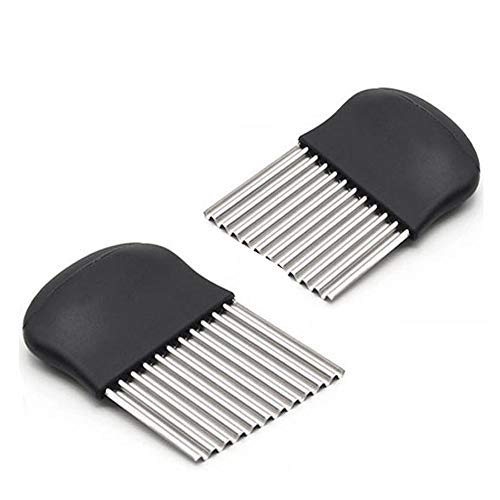 If you aren't slicing tons of veggies or want something that takes up a little less space than a mandoline, you can get these handheld crinkle cutters for the occasional pickle chips you want to make! 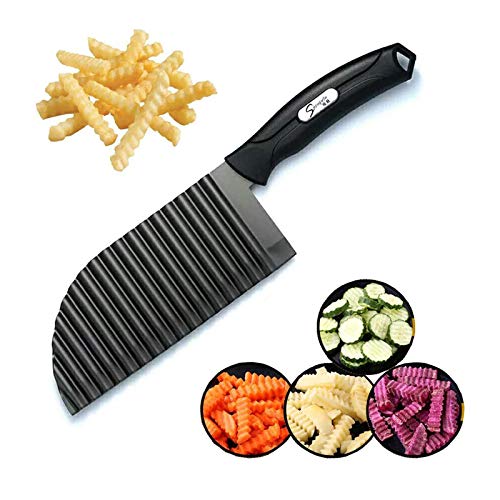 This crinkle cutter knife looks like it would make hand-cutting your cucumbers really easy! And you could use it for larger things like potatoes too if you wanted to make ruffle chips!

These will keep in the fridge for a couple months but they will get slightly less crisp over time.

If you have cucumbers from your garden or your latest farmers market haul, don’t hesitate to make these bad boys! So fresh with just the perfect kick!

Check out these other recipes for easy small-batch refrigerator pickles! 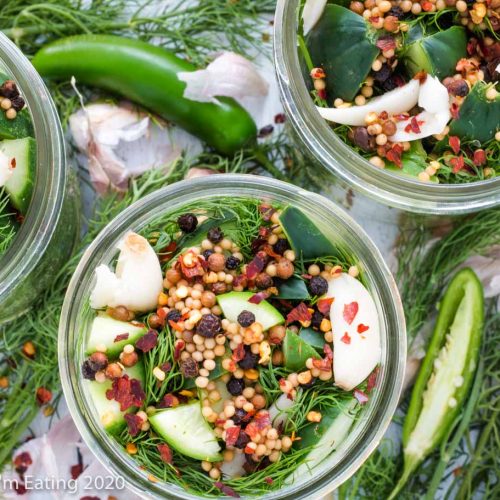 For spice (choose one)

To make more than one jar, adjust the slider at the top of the recipe to however many jars you’d like to end up with!  Peppers and red pepper flakes: I used serrano peppers but you can use another type of pepper if you wish. Be aware other peppers can be more ore less spicy. For example, jalapenos are less spicy than serranos while thai peppers, habaneros, and (heaven forbid) ghost peppers are spicier. Here is a handy Scoville scale that shows the relative heat of commonly used peppers. You can adjust the number of peppers or amount of red pepper flakes if you want your pickles more or less spicy. Preparing and storing: To quickly cut even slices of cucumbers (straight or crinkle cut), you can use a mandoline like this one. You can also use a crinkle cut knife. These are not shelf-stable, so they will need to be kept in the refrigerator. They should keep in the refrigerator for about two months, if you don’t eat them all before that!  Non-reactive saucepans: Use a pot made of stainless steel, enamel, glass, or nonstick surface to make the brine. If you use a reactive material like copper, aluminum, or iron, it may leech a metallic taste into your pickles. Read more here.
Tried this recipe?Mention @pinchmeimeating or tag #pinchmeimeating on Instagram!