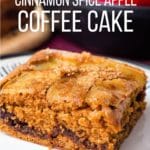 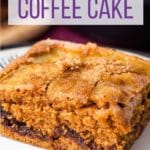 This moist, easy upside down cinnamon apple coffee cake has a spice cake base and a thick layer of cinnamon swirl through the middle. A great recipe for breakfast!

Sometimes I dream of food. I’ve dreamt up recipes before and made them.

Some of them are delicious, like s’mores cookies. Some I haven’t made yet but plan to — chicken with wild rice and nicoise olives. Some are plain weird, like gingerbread drop cookies with chocolate and butterscotch chips, which seems an odd combination to me.

Last week I had a dream that I had baked a cake. It was a thin, single-layer cake, made in a square brownie pan. It involved thinly-sliced apples. And it was so good that I ate almost the whole thing before giving my husband the last tiny square. He asked where the rest of it was and I told him I had eaten it all.

Later in the dream, I planned to make another one, at like three in the morning.

The name of this blog, Pinch Me, I’m Eating, means food so good you have to pinch yourself to make sure you’re not dreaming.

So it seems only appropriate that when I do dream of food so good I ate a whole cake without leaving any for my husband, I should make that cake. Clearly.

Now I just had to figure out the recipe. I knew it should be made in a 9×9″ square pan, be a very simple cake that didn’t involve layers or frosting, and include some thinly sliced apples.

I ended up with this upside down cinnamon apple coffee cake and I’m very pleased with the results.

How to make upside down cinnamon apple coffee cake

This is an apple upside down cake that starts, of course, with thinly-sliced apples decoratively arranged on the bottom of a 9×9″ pan.

The apples are topped with a thin layer of the same applesauce spice cake batter that forms the base of this blueberry spice cake with cream cheese frosting and comes from my sister’s mother-in-law. Follow that with a thick layer of cinnamon sugar filling — the best part of any coffee cake — and another thin layer of batter.

You have to be very careful spreading both layers of batter evenly – the first time, you want to make sure not to disturb the apples underneath. The second time, you want to leave the cinnamon sugar layer intact.

Then you gently swirl the batter and cinnamon sugar layers with a butter knife, being careful again not to disturb the apples on the bottom. You just want a little swirl, not to mix it in completely, so I just did a couple big S-shapes in each direction. Then smooth out the batter over the top one last time and bake.

When I flipped the cake out of the pan the apples were looking a little pale and wan, so I sprinkled just a tad more cinnamon brown sugar on top and threw it under the broiler to let the sugar melt over the tops of the apples.

Although I’m not a huge cake person, quick breads and coffee cake are exceptions for me, especially when there’s a nice layer of cinnamon swirl in the middle. And while I’m not a huge cooked-fruit person either, I can say I will definitely be making this upside down cinnamon apple coffee cake again in the future.

For a perfect breakfast, try serving this with one of these: 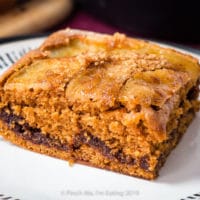