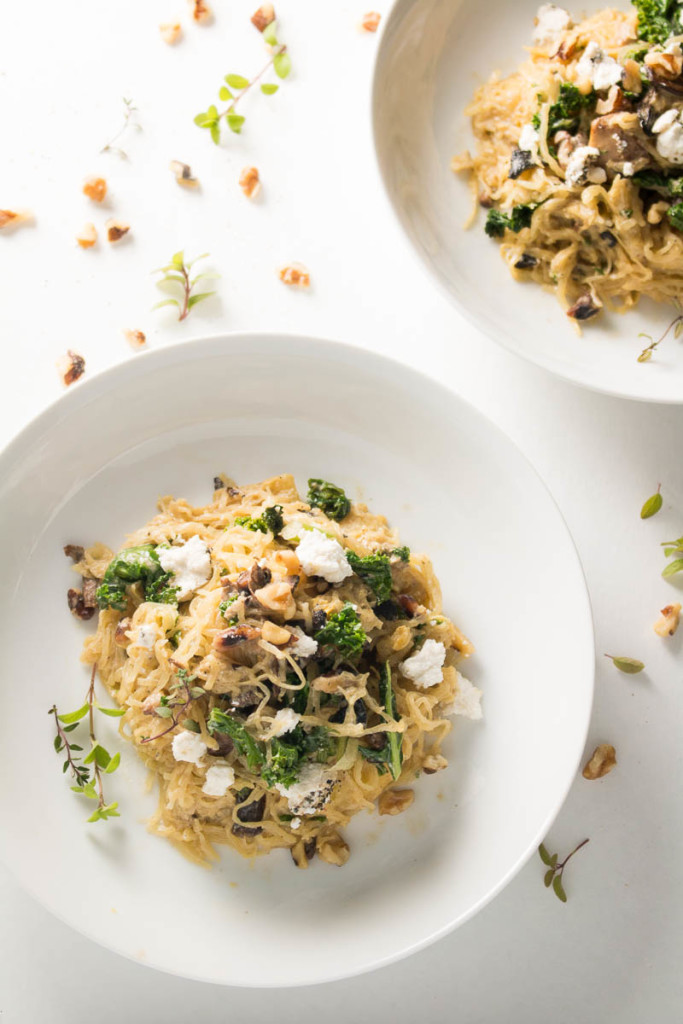 I’ve been trying to get a little creative with these Meatless Fridays here during Lent and make some interesting and delicious meals while still keeping the spirit of giving something up – it doesn’t really feel like a penance if you’re indulging in lobster on Fridays although it’s technically within the “rules.”

Also, spaghetti squash is awesome and I want to eat it all the time, especially now that I know the best, most delicious, easiest way to cook it! It’s true. Let me tell you a story.

Back when I was a wee little college girl just discovering spaghetti squash, I heard that the way to cook spaghetti squash was to cut it in half long-ways, and scrape out the seeds with a spoon. Then you put it face down in a microwave-safe dish with a little water, cover it with plastic wrap, and steam it until it’s cooked. When it’s finished steaming, you take a fork and scrape the living daylights out of its innards until you get a pile of spaghetti-ish squash noodles. Get as much as you can out of the squash and then discard the shell. Right? 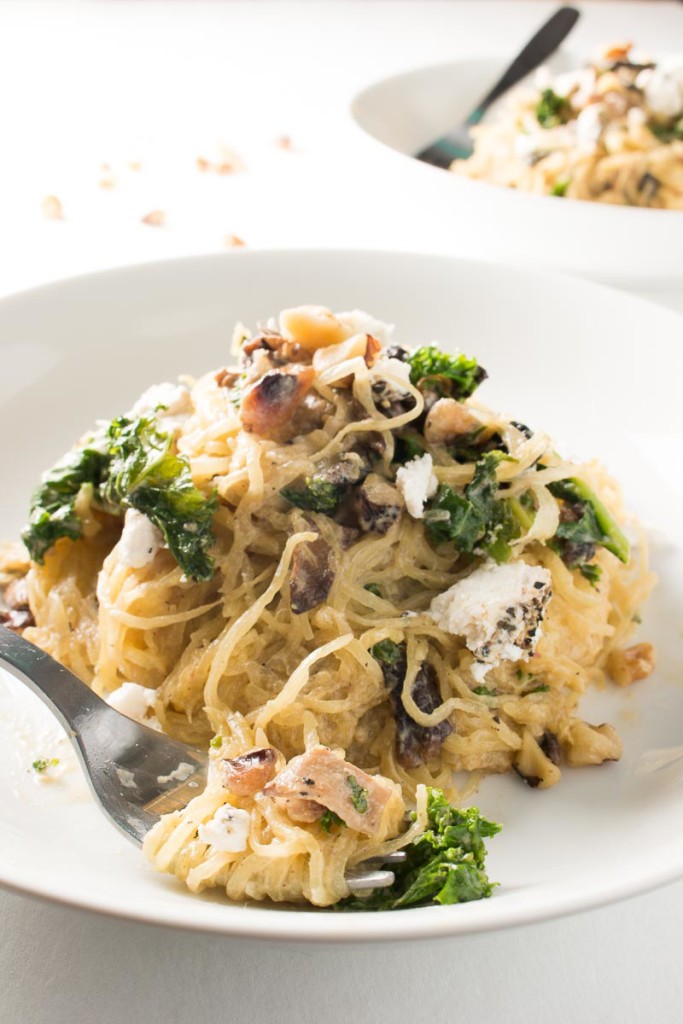 Okay, first of all, let me tell you the problems with this method.

So, with all these problems, what’s a girl to do?

What if I told you there was a way to make your squash that solved all these problems, AND tasted better on top of it?

It’s true!!! I wouldn’t lie to you, would I? Stop giving me that look!

My whole (spaghetti squash-related) world was changed when I saw this recipe (which is delicious, by the way).

So, instead of cutting your squash long-ways, you cut off the top and bottom and then slice it into rings. WHAT!!! First of all, this makes for more even cooking because you have even slices rather than one thick-and-thin spherical piece. Second, it makes the second step so much easier. 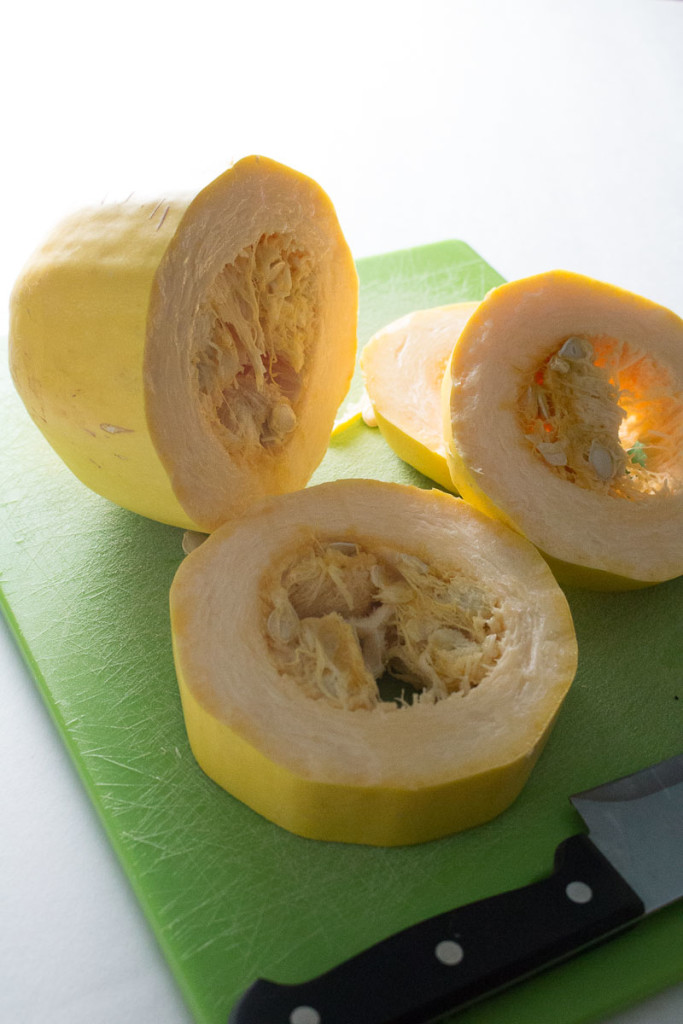 Then, you cut out the seeds by running a knife around the middle. This is way better than the scraping method because you can actually SEE the boundary between seedy goop and real, genuine squash, so it’s not the blind scraping-until-you’re-pretty-sure-it’s-not-seedy-goop-anymore (or maybe that’s just me).

Now that you have your beautiful, even, seedless squash rings, put some parchment paper on a baking sheet and drizzle it with olive oil. Swirl all the squash rings in the oil on both sides, then sprinkle with kosher salt and pepper on both sides. Then you roast it in the oven at 400 degrees for about half an hour. Because everything tastes better oiled, salted, peppered, and roasted. 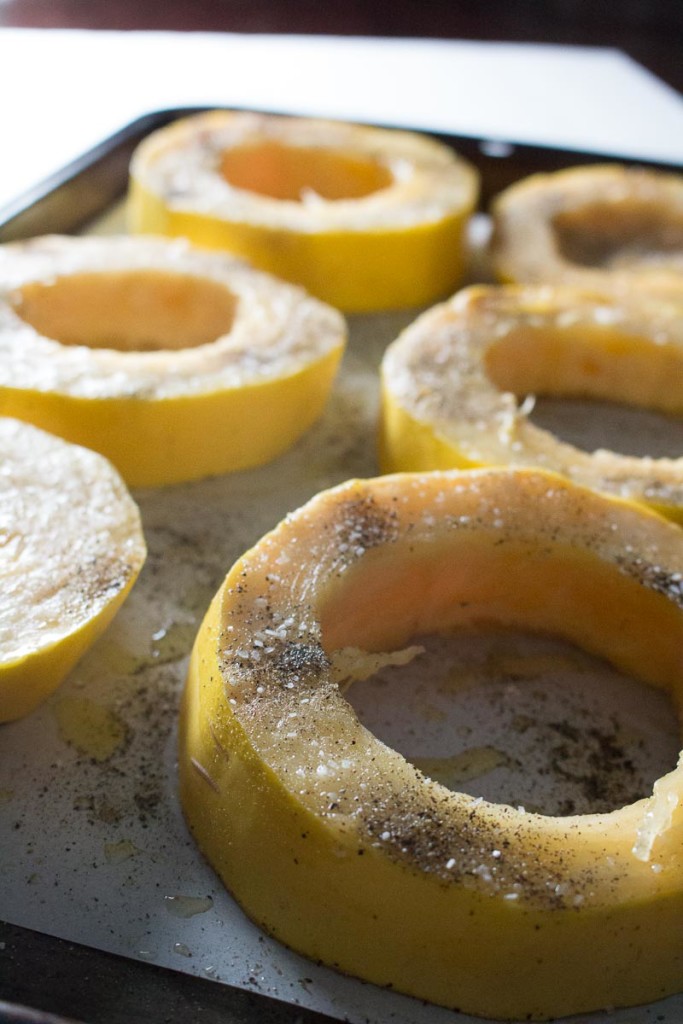 Now here comes the coolest part. When you take it out, you can just let it cool for a few minutes while you prepare your other stuff. In this case, I could prepare the whole sauce while the squash was cooling enough for me to handle. 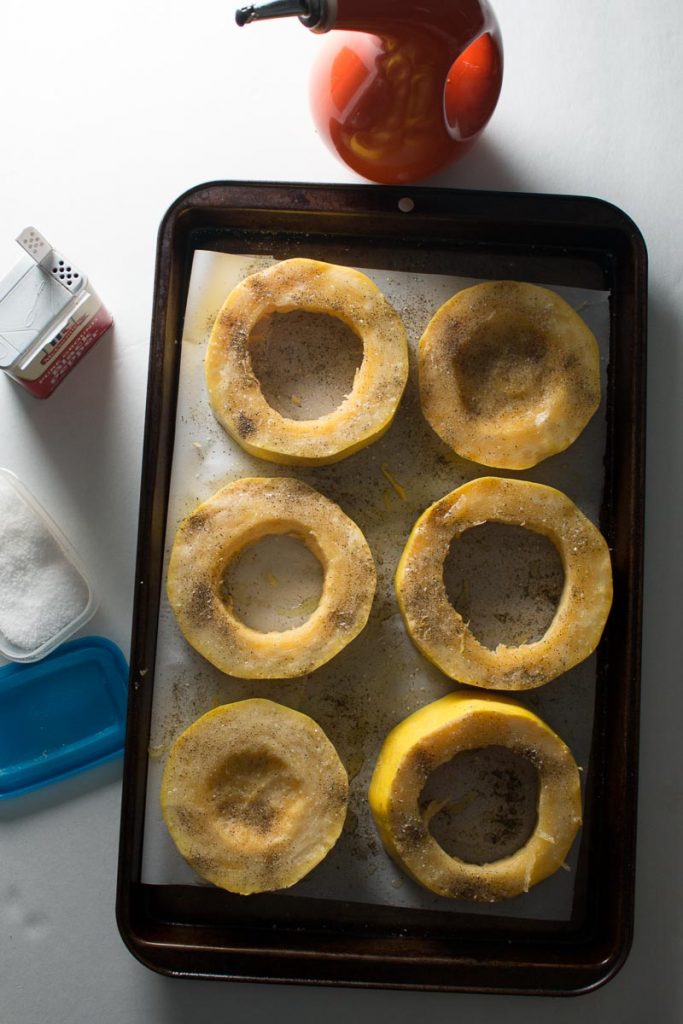 When you can handle it, you just peel off the skin. That’s right. The skin is paper-thin, and the rest is both edible and delicious. You can NOT get this much squash out of the vegetable by scraping it with a fork. 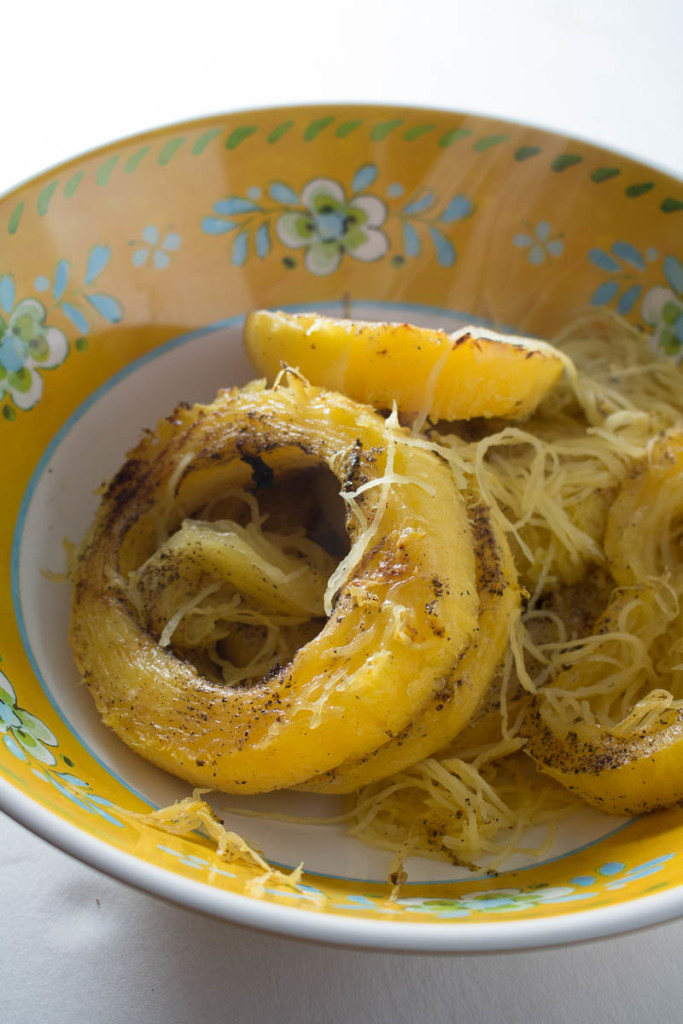 Once the skin is off, you gently pull it apart with your hands. No scraping, mutilating, breaking up the beautiful spaghetti noodles with a fork. It just pulls apart into a beautiful, gorgeous, undamaged bowl of noodle-y goodness. 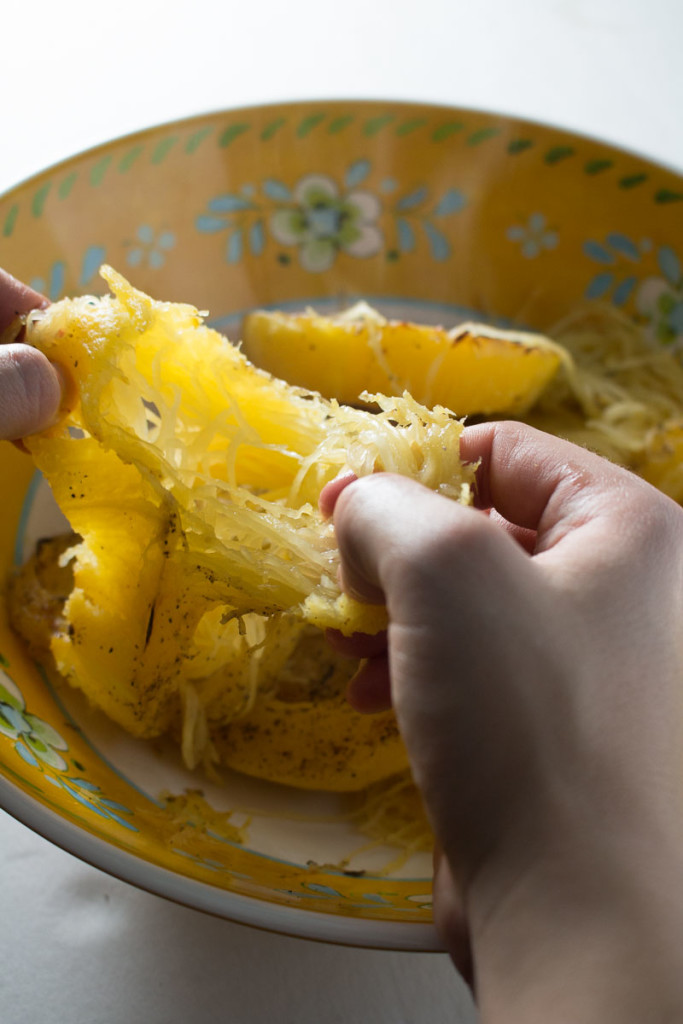 There is a tiiiiiny bit just around the outside that doesn’t separate into strands, but it tastes just as good as the rest. It’s more of a solid squash texture, and you can just break that part into small chunks. I actually think it’s pretty awesome, because you get both noodles and chunks out of a single vegetable! 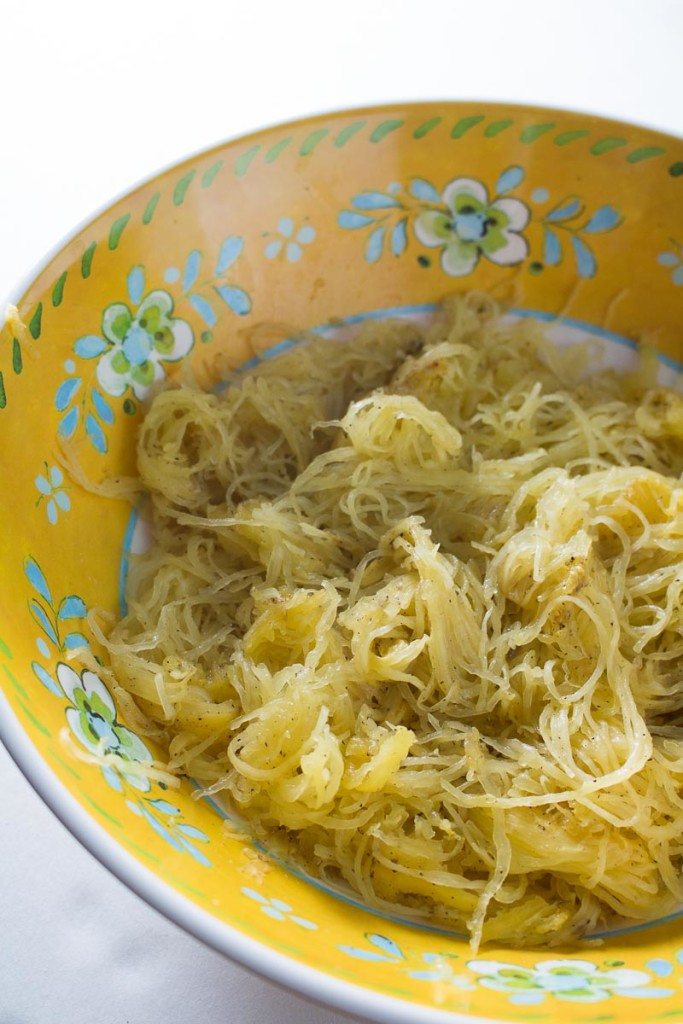 I will never go back to steaming again, and I bet you won’t either.

So, this recipe for spaghetti squash with mushrooms takes advantage of the natural sweetness of the vegetable by pairing it with a little nutmeg and fresh herbs in a cream sauce. Plus some wild mushrooms (I used porcini, but you can use any mushrooms you want. Well, any ones that won’t kill you or make you hallucinate, anyway. You know what I mean.). I also added walnuts for a little earthy crunch and some kale, because I had some leftover and also because kale is amazing. 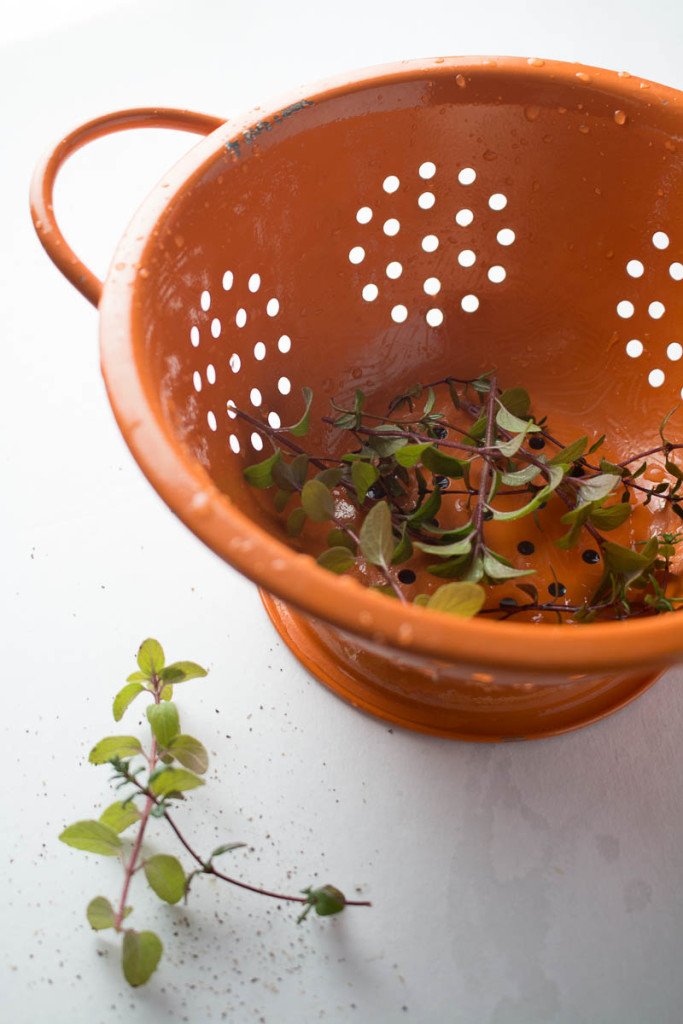 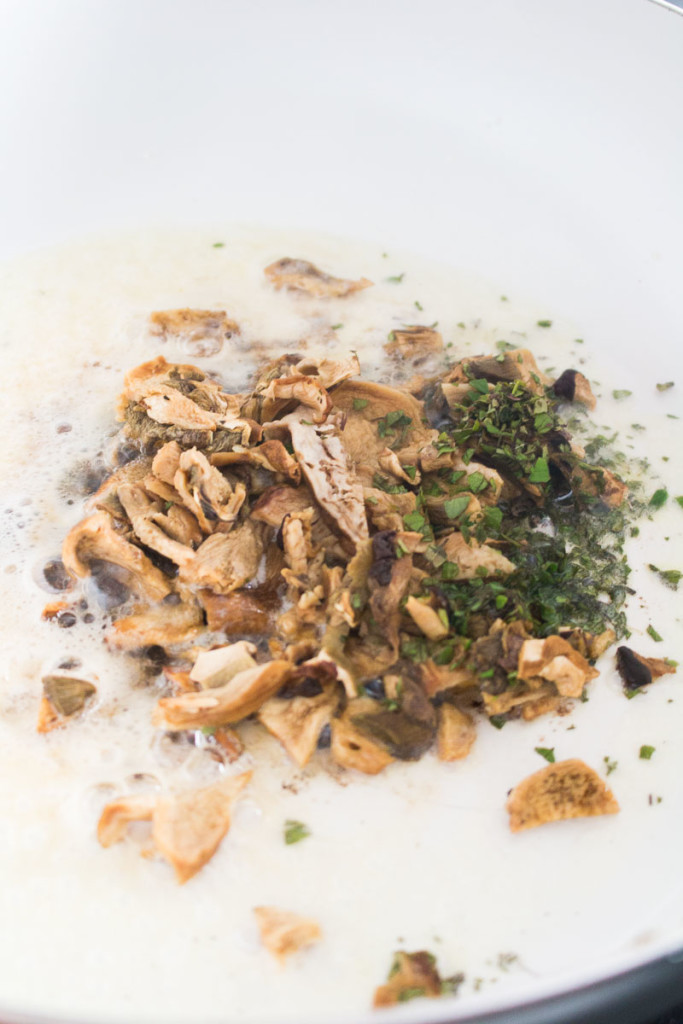 I topped it with a little crumble of goat cheese for the same reason as the kale (I had some leftover, it is amazing, and it goes beautifully with spaghetti squash!). 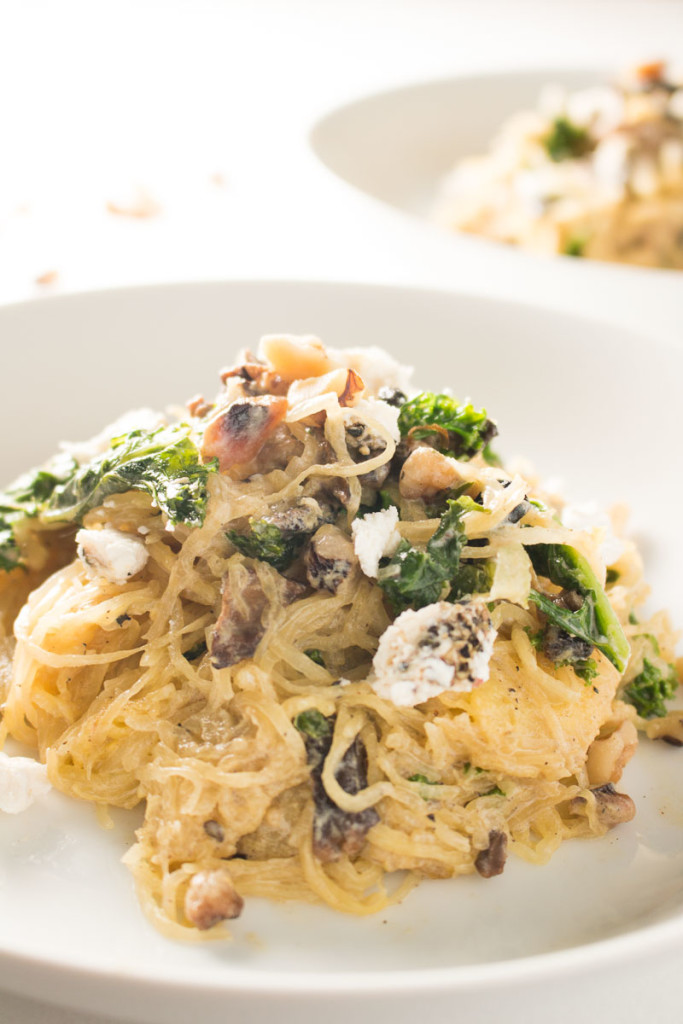 One medium squash is plenty to feed two people. And Mike said several times during dinner that he kept forgetting it wasn’t real pasta! Now that’s a successful spaghetti squash! 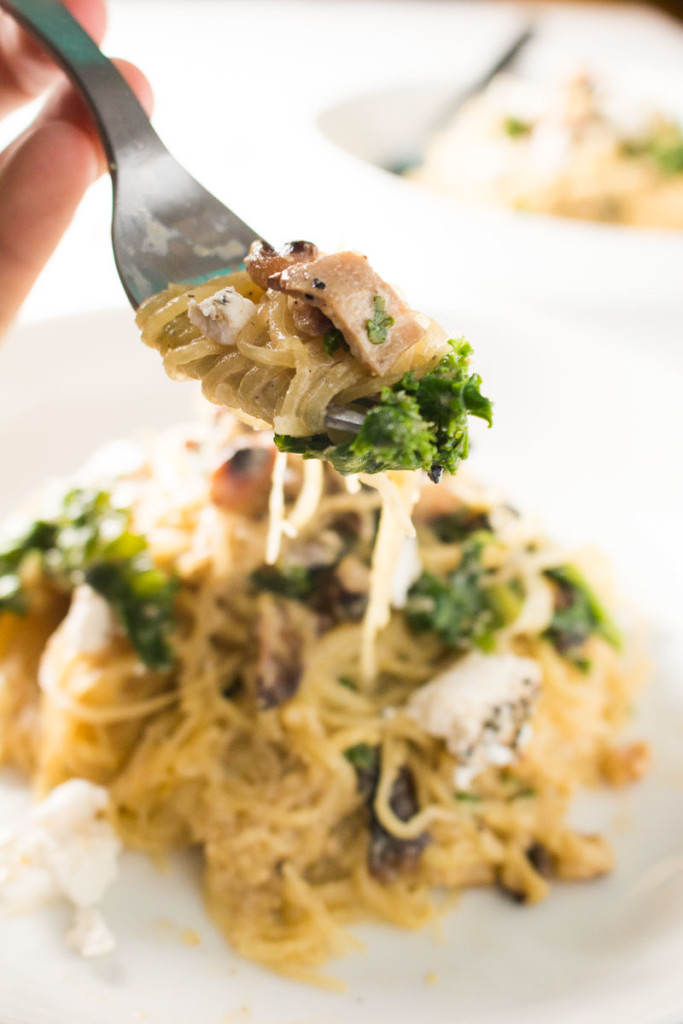 Very little hands-on time is required to make this spaghetti squash with mushrooms and nutmeg cream sauce. Just cut and oil the squash, go play the guitar or something while it roasts (and while your dried mushrooms rehydrate), and then you can make the whole sauce in the time while the squash is cooling out of the oven. Maybe 15 minutes of hands-on time. 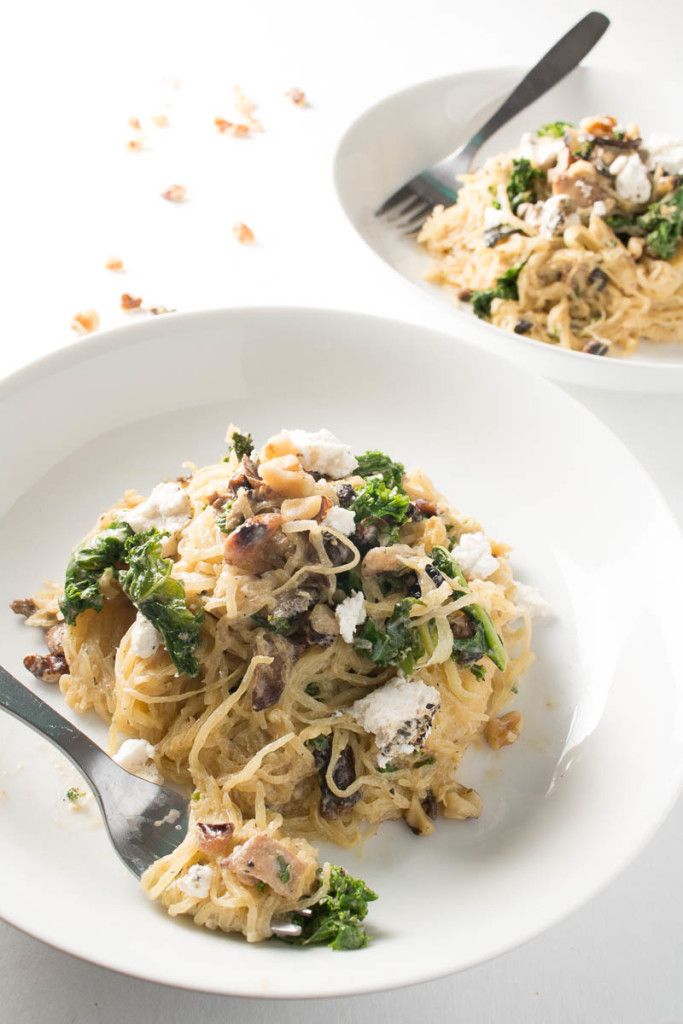 It’s a naturally sweet, earthy dish that’s great for Meatless Fridays or Meatless Mondays, if you’re are vegetarian every day, or if you just want an easy meal and some delicious spaghetti squash – simple to make, low carb, gluten free, and delicious. What more could I want?

Want some more meatless meals? Check out my Meatless Fridays board on Pinterest!