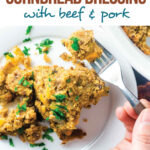 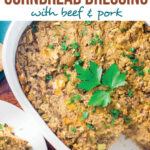 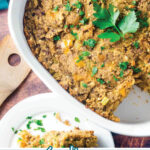 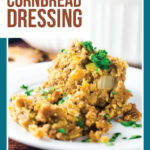 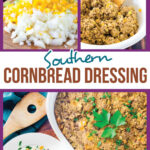 Old fashioned Southern cornbread dressing uses either homemade buttermilk skillet cornbread or Jiffy corn muffin mix! This dish is loaded with beef, pork, poultry seasoning, and sage for a sausage-like flavor. Easy to make and freeze in advance, it’s a must-have holiday side for Thanksgiving, Christmas, and Easter!

Dressing or stuffing is one of those side dishes most people agree is a delicious necessity at the holidays. But what exactly that looks like may be different on each family’s table!

I grew up eating and adoring boxed Stovetop stuffing, sometimes with a few extras thrown in like pecans or cranberries.

Then I was introduced to my sister’s in-laws’ unique sourdough sun-dried tomato artichoke stuffing and I was hooked! I made it for years.

But most recently, when I had my first Thanksgiving dinner years ago with my own future in-laws, I tasted their traditional Southern cornbread dressing and just couldn’t get enough.

Really, I’ve almost never met a dressing or stuffing I didn’t like. But this one is my favorite du jour (my husband’s favorite too!) and boy is it good!

So is it dressing or stuffing?

Okay, I wondered about this for a long time too. I always called it stuffing and thought it was weird when people called their stuffing “dressing”. What did they think it was, a vinaigrette or something?

Since then, I’ve learned there technically is a difference, albeit a small one.

The only real difference between dressing and stuffing isn’t what it is, but where.

If it’s stuffed inside the bird to cook, it’s stuffing. If it’s baked separately in a casserole dish or baking pan, it’s a dressing. So really this one could be either a cornbread stuffing or a cornbread dressing, depending on where you cook it.

I, and my in-laws, make this in a casserole dish, so I’m calling it a cornbread dressing.

That’s also what I recommend doing, and I’ll tell you why.

In order to be properly cooked, the center of your stuffing, if stuffed inside a raw bird, must reach a safe temperature of 165 degrees Fahrenheit, the same temperature as your fully-cooked turkey. In doing so, your turkey may end up having to be overcooked, and nobody wants a dry turkey. You may get some additional turkey flavor in the stuffing, but at what cost? Not worth it.

You can get that extra turkey-flavored goodness in your (separately-cooked) dressing by topping it with some delicious gravy made from your turkey drippings. Win-win!

I’ll admit, when I first saw a pan of my in-laws’ Southern cornbread dressing, it didn’t look that appealing to me. It was basically a solid brown mass you cut into pieces like a cake. But the flavor blew me away! (side note: yes, it’s very difficult to photograph brown foods so they look appetizing! Hopefully I did a decent job!)

So what is cornbread dressing anyway? Think of it a bit like refried beans, except it’s rebaked cornbread instead.

You bake the cornbread; crumble it up and add all kinds of meat, veggies, and herbs; mix in some broth to keep the mixture moist, and rebake it. It becomes an entirely different, delicious dish with little in common from the original cornbread it came from!

What’s in this cornbread dressing?

I’ll start with an overview of what makes up this cornbread dressing before going into a bit more detail about each component. This recipe includes:

When all those ingredients come together, it’s a truly delicious harmony of flavors in a tender, sliceable format (yes, a bit like cake).

And when you add some turkey gravy on top? Fuggedaboutit! SO good.

This dressing starts, of course, with cornbread. The more flavorful the cornbread is, the better your dressing will be.

I recommend starting with a full recipe’s worth of this skillet buttermilk cornbread — some of the most buttery, flavorful cornbread I’ve ever had!

If you’d like a bit of a shortcut, though, two boxes of Jiffy cornbread mix, baked according to their directions, will do the trick.

Saltines or breadcrumbs, crushed and mixed with a liquid, are often used as a binding ingredient in meatloaf. I imagine they function similarly here, to help keep the dressing together instead of crumbling apart.

Rather than mixing the saltines and breadcrumbs with the liquid separately before adding it to the cornbread crumbles, you can just mix all the breads together at once with the veggies and then moisten with broth at the end.

Added to the cornbread mixture is a mirepoix of onions, bell pepper, and celery. A mirepoix is a mix of diced veggies cooked in butter or oil for a long time, without browning, until soft. It’s used as a base to infuse flavor into your recipe.

While a traditional French mirepoix uses finely diced onions, carrots, and celery, the Creole version is called “the holy trinity” of ingredients and swaps the carrots for bell pepper (usually green, but you can use whatever color you like in this recipe).

You want to cook the vegetables until very soft. They’re there for flavor, not texture, so “tender-crisp” is not the goal here. I’d hate to run into a crunchy bit of celery in the middle of my cornbread dressing.

While some people go crazy with a turducken for the holidays, I prefer to keep my turkey traditional and add in any “bonus meats” elsewhere in the meal. My in-laws use ground beef in their dressing, but I decided to mix it up with a combination of ground beef and pork.

The pork adds flavor and has a higher fat content than most ground beef, so your meat will stay tender and moist as a part of your cornbread dressing. It will not, as my mother once infamously said of ground beef, turn into “dry little balls of meat rolling around in your mouth.” Ew.

I like to combine the meats together in a bowl before cooking, rather than throwing each meat together in a pan and then browning. This makes it truly a beef-pork blend, rather than simply alternating pieces of either beef or pork.

The herbs and seasonings

This recipe contains what seems like a ludicrous amount of poultry seasoning (2 1/2 tablespoons). I just kept adding more until it tasted right, and that’s what I landed on.

But when you think about it, it’s not that obscene. Poultry seasoning is a blend of other herbs, so if you break it down you’re probably only adding 1-2 tsp of each of a bunch of different herbs. Pre-made poultry seasoning is just a convenient shortcut to get you there more quickly.

There’s also salt, pepper, and a good helping of sage, which, when combined with the pork, gives it a wonderful sausagey undertone.

You can technically just use water here for moisture but I like to infuse flavor wherever possible. So I swapped the water in my in-laws’ recipe for chicken broth. Turkey broth would be even better if you have some!

You want your dressing mixture to be nice and moist before you smooth it into your casserole dish or baking pan.

Can I make cornbread dressing in advance?

Absolutely, and I highly recommend it! Nobody likes making an entire holiday feast on the actual holiday itself: you deserve to relax and spend time with your family!

You can prepare the whole cornbread dressing recipe in advance, stopping short of the final step of baking in the oven. If it’s just a couple days in advance, you can stick it in the fridge until you’re ready to bake, or wrap it tightly in foil and freeze it for up to a couple weeks.

If frozen, thaw it overnight in the fridge before baking. From the fridge, you may need to add an extra 5 minutes or so to the baking time to heat it throughout.

Other holiday side dishes

Complete your holiday meal with some of these other side dishes! (Cornbread dressing with a side of cornbread? Uh, YES PLEASE) 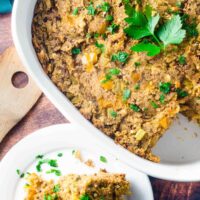 To make in advance, complete all steps and stop just short of baking the dressing. Refrigerate for a couple days or wrap tightly in foil and freeze for up to a couple weeks.  If frozen, thaw overnight in the fridge before baking. Add another 5 minutes or so to the baking time if baking straight from the fridge.
Tried this recipe?Mention @pinchmeimeating or tag #pinchmeimeating on Instagram! 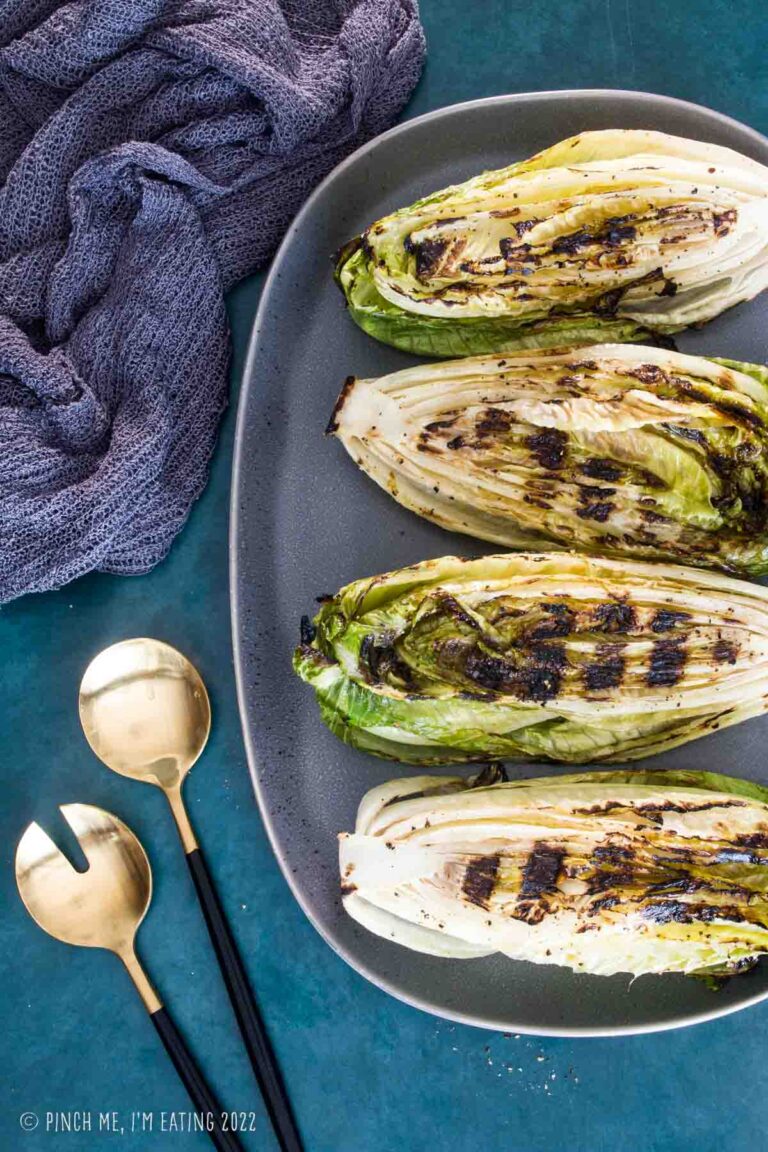