Slow cooker root beer pulled pork is juicy, flavorful, and provides the perfect base for mixing in your favorite barbecue sauce or using in other recipes! Takes only 5 minutes to prep. 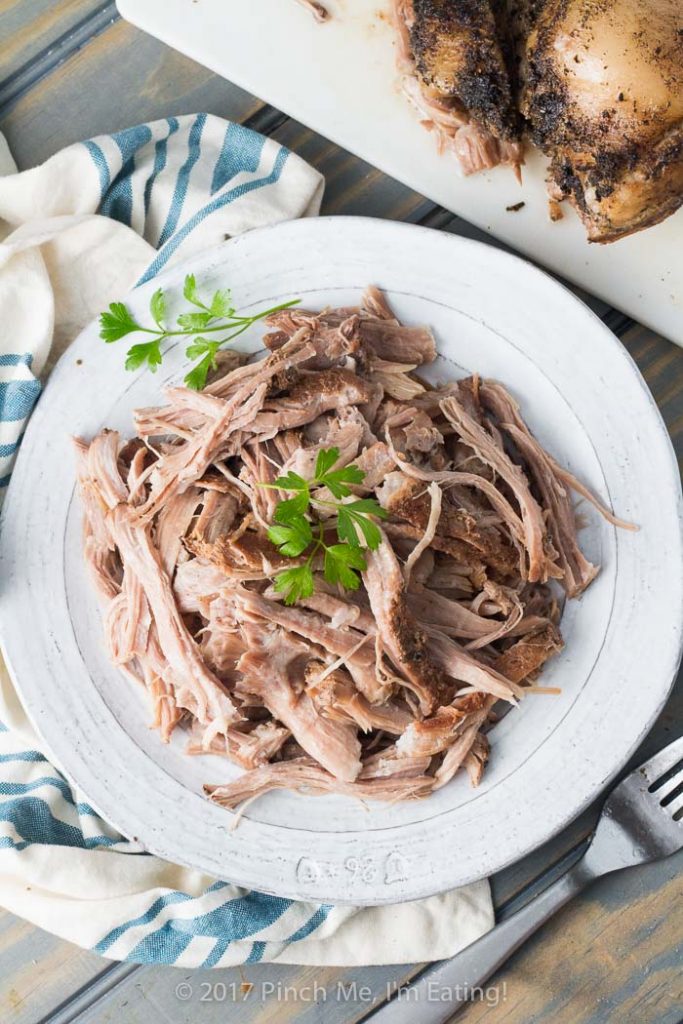 It’s about time I shared this slow cooker root beer pulled pork recipe with you. In fact, I’ve been meaning to do it for about a year and a half, but I just couldn’t get the photos to come out right.

The first time I made and photographed it in December 2015, daylight savings time had just ended and I hadn’t gotten my Lowel EGO light for nighttime photography yet (I freaking LOVE that thing!). As a result, even though I rushed home from work and immediately started shooting, all my photos were too grainy to use due to the low light.

I tried again last month and just wasn’t happy with the photos either. And I wanted them to be good photos for you because this slow cooker root beer pulled pork is so dang good! They had to do it justice!

Well, the third time was the charm. I’m pretty happy with these photos and I think they look as good as the pork tastes!

In a hurry? Jump to the recipe!

Being a South Carolinian, there is a 100% chance I will smother this stuff with South Carolina mustard-based BBQ sauce. (Recipe coming soon for the sauce, so you can try it even if you don’t live here! Yay!!) But I decided to share this recipe for slow cooker root beer pulled pork NAKED *gasp!* so you can put whatever sauce you want on it! 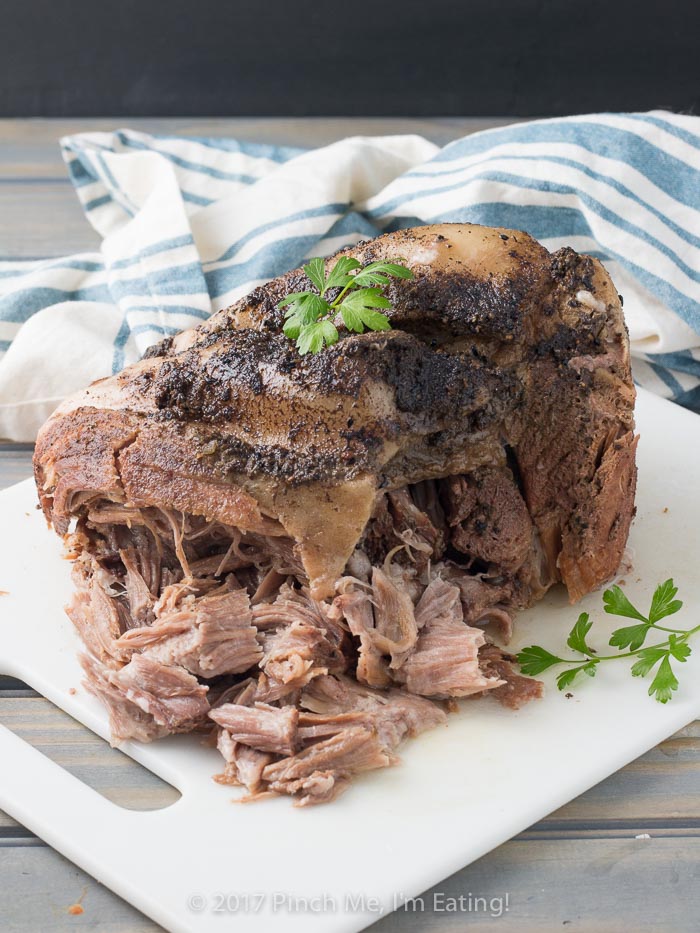 If you’re wondering, the root beer in this recipe doesn’t actually make the pulled pork taste like the soda. In fact, adding cola tenderizes meat because of the acidity of the soda, while lending a bit of subtle flavor. And boy is it tender!!! But if nobody told you there was root beer in the pork, you’d never guess it. It just helps make it fall-apart tender and absolutely amazing.

Throw in a little salt, some pepper blend (I use Jane’s Krazy Mixed-up Pepper), ground mustard, and sage, and it is ON POINT!

The result is a tender, juicy, and flavorful meat that’s a perfect blank slate to do with whatever you’d like. Look at how it just falls apart! 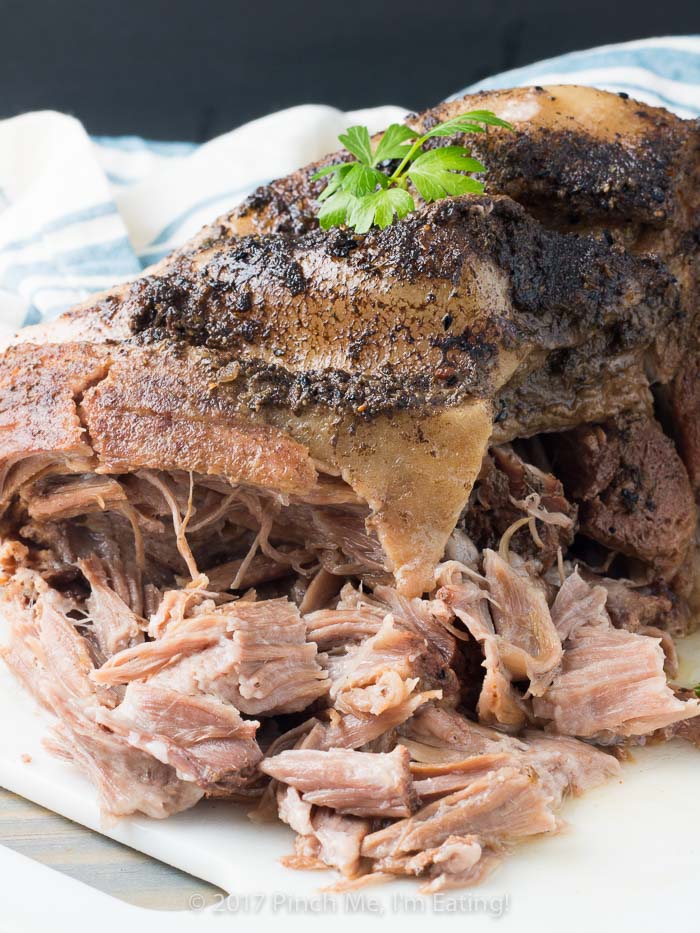 How long does this slow cooker root beer pulled pork take to prepare and make?

I’m very much not a morning person, which is why this recipe is perfect for me. This takes 5 minutes or less to assemble and then you can be out the door for work. Some recipes have you sear the meat before putting it in the slow cooker, but to me that defeats the purpose of the crock pot.

Cooking time will vary depending on the slow cooker you have, but regardless of what kind you have, you should be safe (and still juicy) with a 6-8 hour cooking time.

Closer to 10 hours between when you leave for work and when you get home, like me? I wouldn’t worry about it. The cook time on this is very forgiving, especially if you have an older slow cooker.

I love my vintage orange Rival Crock Pot because not only is it adorable, but it was also made before the FDA made everyone raise their slow cooker temperatures. Vintage slow cookers will never boil if they’re on the low setting, while newer ones will boil even on low, it will just take a long time. This is unfortunate for meats like chicken breasts which will dry out after 8 hours in a modern slow cooker. You can read more about this phenomenon here and here.

Fortunately, pork butt/pork shoulder (the meat you’ll be looking for for this recipe) is fairly unaffected whether you use a vintage or newer model.

If you have an older crockpot made before about 2005 (or in the 60s, like mine), you can probably leave it a couple extra hours without it drying out. I usually put the pork shoulder in before work (7:30 a.m.-ish) and take it out when I get home (usually, around 5:30 p.m.) and it’s just fine. But I’ve gone to the farmer’s market after work instead of straight home and the pulled pork is still juicy. I’ve also forgotten about it and taken it out 12 hours later and it’s still fine. If you have a newer slow cooker, I’d try to stick closer to the 6-8 hours listed in the recipe, but if you can’t make it home for 10 hours, I wouldn’t fret. 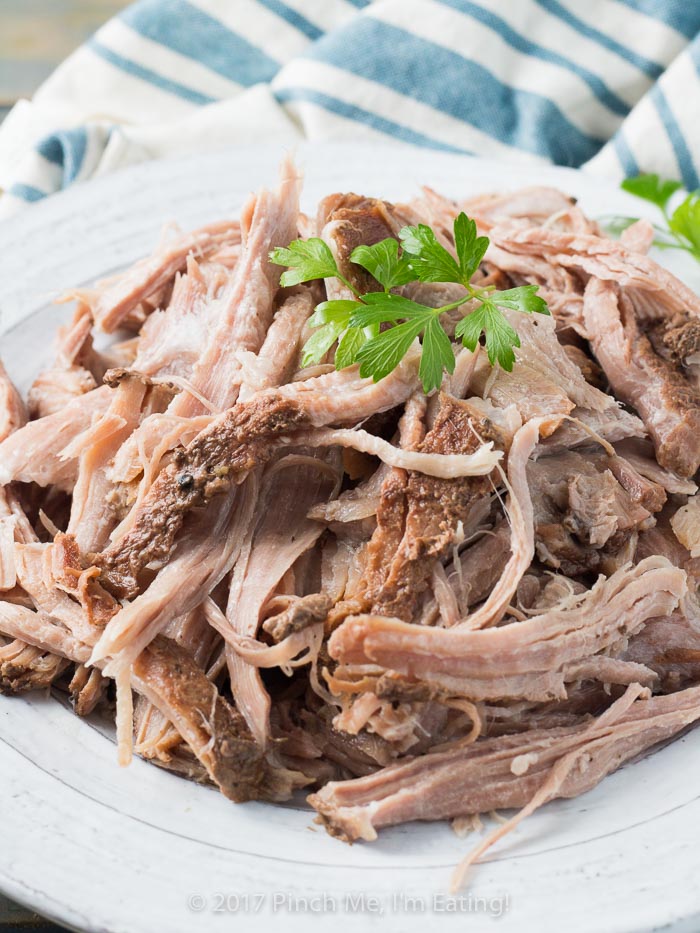 How much pork should I make?

For this slow cooker root beer pulled pork, plan about a pound of meat per person. Because there is so much fat on the meat you’ll discard, and preferably, a bone in it, you won’t actually be feeding each person an entire pound when all is said and done. But if you have four people, get a 4-lb pork butt.

I had a chunk of meat just over 4 lbs and it made 6 cups of shredded meat.

Is it really the pig’s butt?

No, pork butt and pork shoulder are interchangeable terms, and the cut of meat comes from the pig’s shoulder area. Boston Butt is another name for the same cut.

Why the funny name, then, if it’s not from the pig’s derrière?

Apparently, in pre-Revolutionary New England, less desirable cuts of meat like the pork shoulder were packed into barrels or casks, also known as butts, for storage and shipment. The way the pork shoulder was cut in Boston and shipped became known in other regions (but not Boston) as the Boston Butt.

While the cut was “less desirable” because it’s tougher, it’s just the right thing for cooking low and slow until it falls apart. I don’t know about you, but it wouldn’t be the same to have barbecue sauce over a pork chop or tenderloin.

Interestingly, something labeled “pork butt” or “Boston butt” is more likely to still have a shoulder blade bone in the meat, while “pork shoulder” tends to have the bone removed. If possible, you’ll want the bone in for this recipe to add a little extra flavor, but if you can’t find one with the bone, a boneless cut will work just fine.

What is the cut from the pig’s actual rear end called, then? The ham! 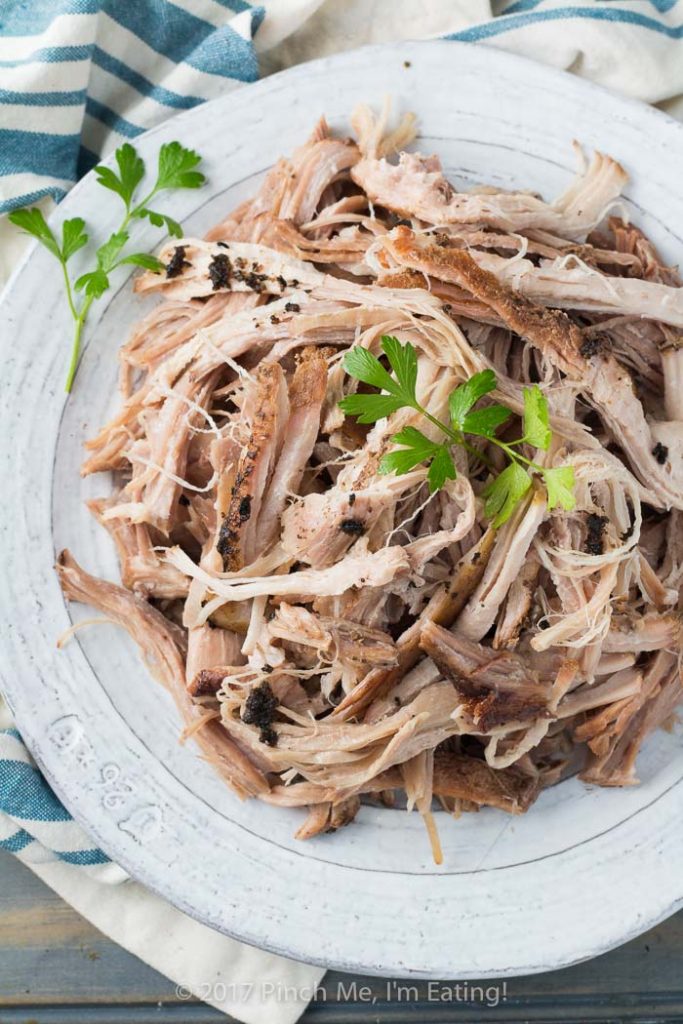 What should I do once I’ve made the pulled pork?

What’s your favorite thing to do with pulled pork? Let me know in the comments!

If using with BBQ sauce

Try not to take too many tastes of the pork or you won't end up with any left for dinner! 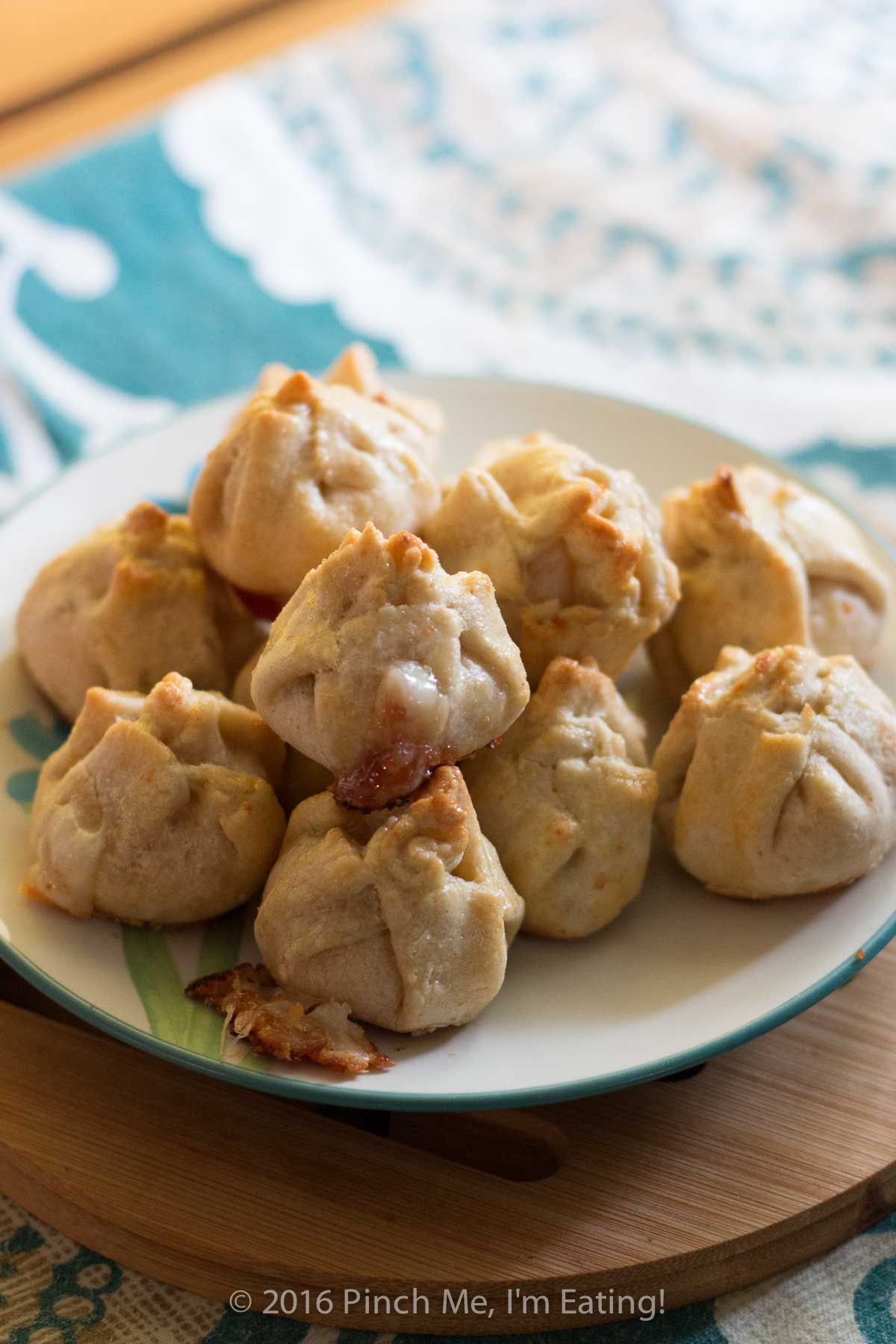 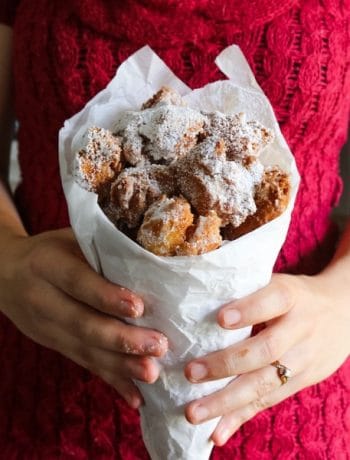 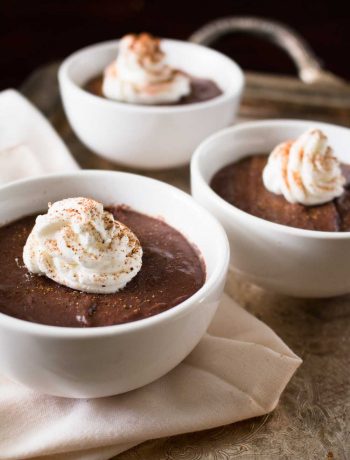 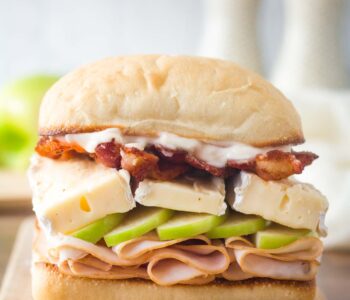 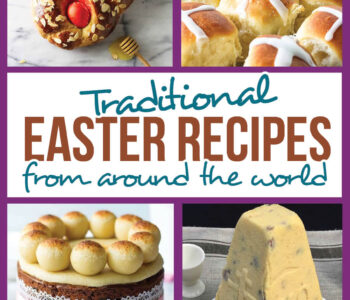 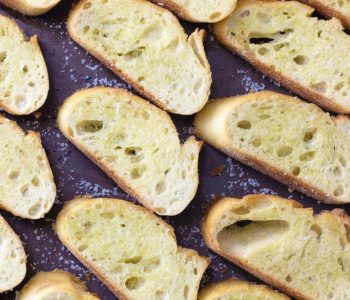