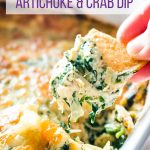 This hot baked spinach, artichoke, and crab dip is the best crowd pleaser party dip – easy to make ahead, perfectly cheesy, and full of the good stuff. Can be made in the oven or in a crockpot! 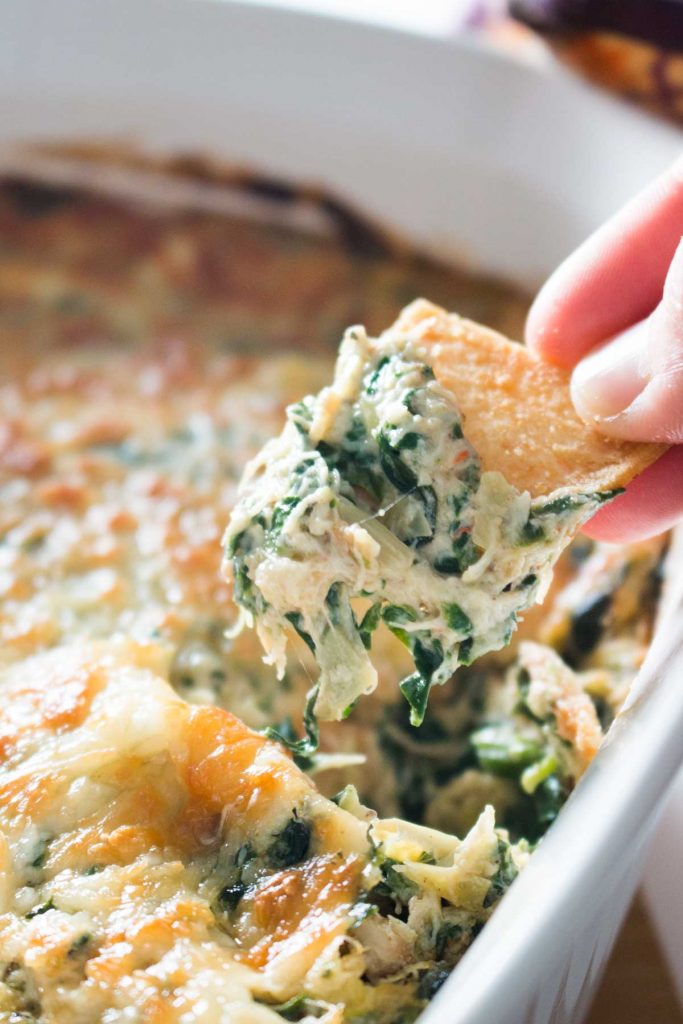 This baked spinach, artichoke, and crab dip is the answer to so many important questions in life.

What do you do when you love spinach-artichoke dip but you also love crab dip and you can’t decide which one to make? Make this dip!

What do you make for your in-laws for movie night during Christmas when you want something hot that you can make quickly, make ahead, and hang out with everyone in the living room while it’s cooking? This dip!

What do you bring to a party on a Friday during Lent? This dip!

What do you take photos of just out of the oven before said party, and think you’ll take some nice half-empty-casserole-dish photos of later when you get home to show more of the inside texture, but end up with this instead? This dip! 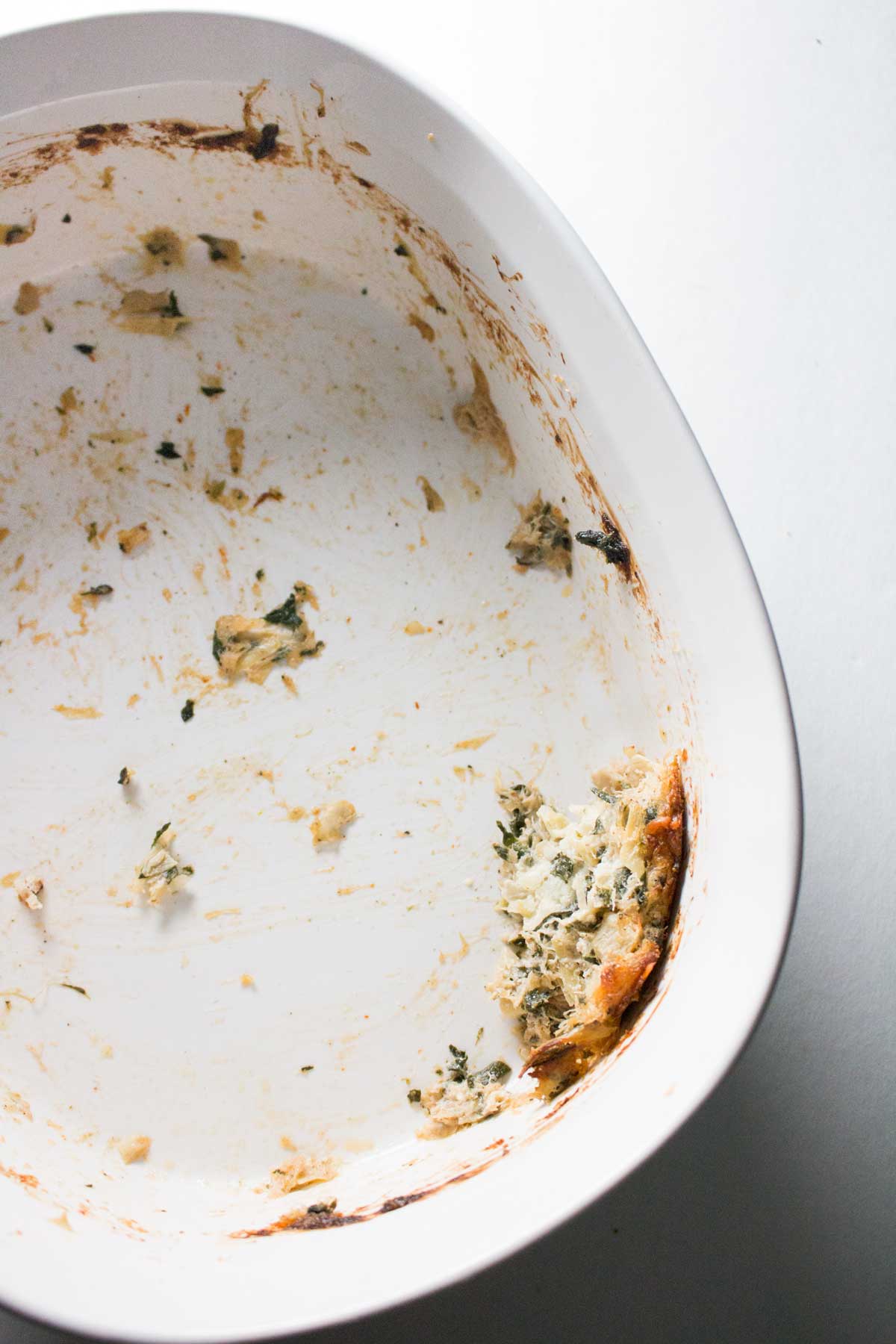 Seriously. This dip. The answer to SO MANY questions.

It’s hot, cheesy, and so full of Stuff.

I don’t know about you, but when I eat spinach-artichoke dip, I always fish around for more pieces of artichokes and more spinach. One would think that a spinach artichoke dip would have no problem delivering, but somehow there always seems to be too much filler and not enough Stuff. (Okay, I know the “filler” is cheese, and cheese is pretty awesome, but there is still plenty of cheese to go around in this dip) 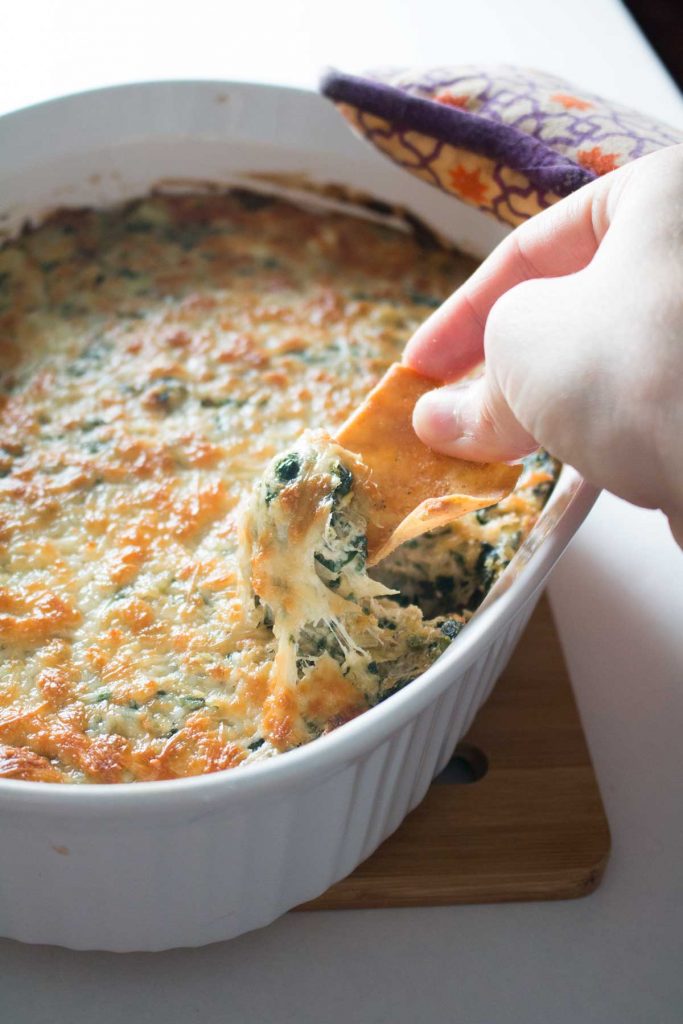 Problem solved: this recipe uses twice the artichokes as most recipes I’ve seen. Two whole cans of them.

Here’s a tip about them, too. I’ve purchased many cans of artichoke hearts and been disappointed at how many tough, woody outer leaves there are on what’s supposed to be a tender vegetable heart. It seems impossible to get rid of the “bad leaves” without losing half the volume of the can. I asked my stepmom if she had a preferred brand of artichoke hearts, since she uses them moderately frequently and I’ve never felt like I’m chewing cud when she puts them in salads and other dishes, and without skipping a beat, she said Progresso, quite confidently. So I found some (they only had them at Publix, not Harris Teeter, where I usually shop, for anyone who might share the same grocery stores as me) and they really are a much higher quality than the other ones I’ve tried. Worth the trip to another grocery store if you can find Progresso brand. 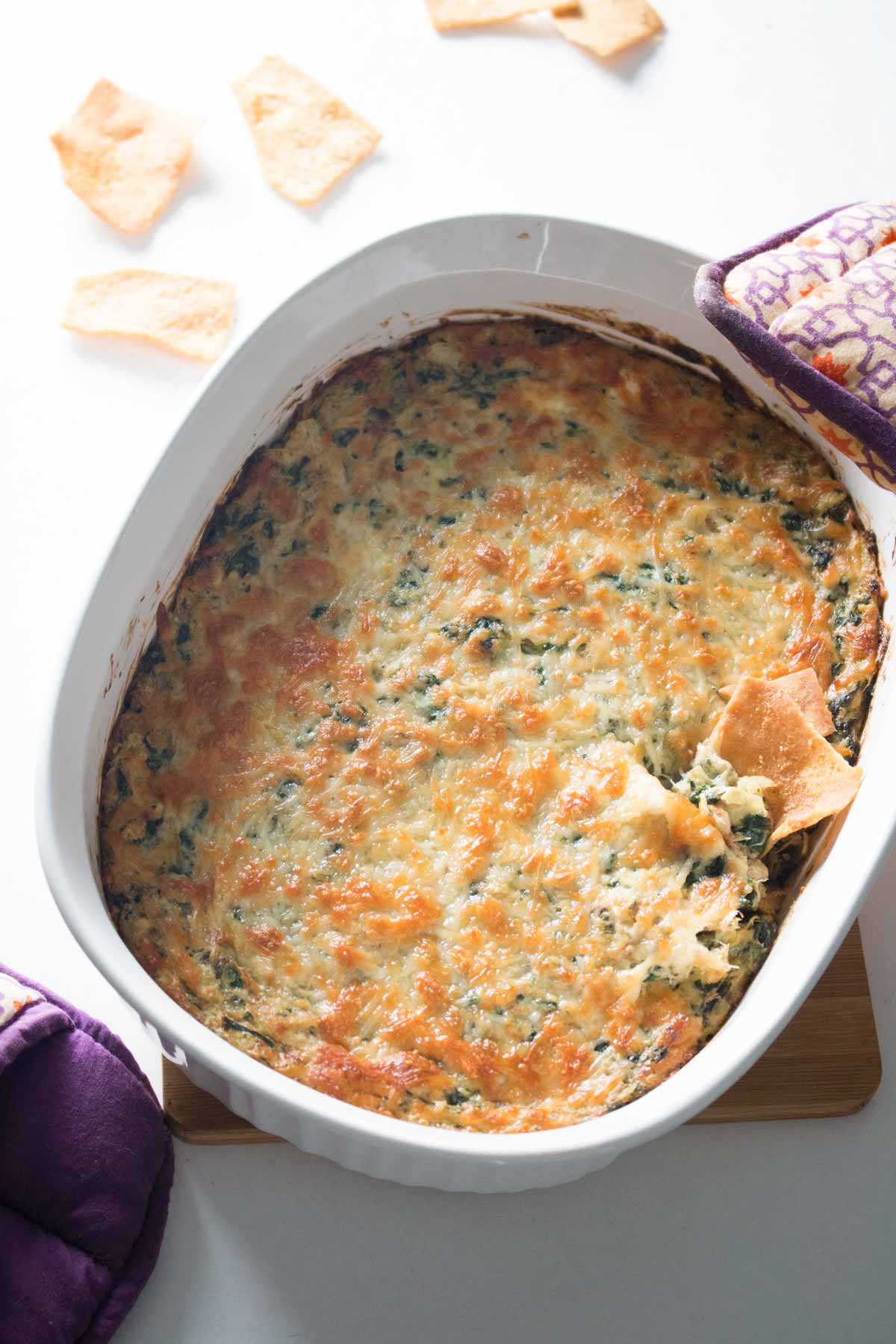 For this, I just got a couple 5 oz bags of baby spinach, put it all in a giant bowl with a splash of water, and steamed it in the microwave for a couple minutes. Then you really do wring out as much water as possible with paper towels so your dip doesn’t end up watery, and then chop it up into smaller pieces. It tastes so fresh and spinachy, and not like dirt, like the other half of my box of frozen spinach did. I am serious, I don’t think I’m buying frozen spinach ever again. One time was plenty. I’ll just do the steam, dry, and chop trick next time I make homemade spinach pasta. I’m sure it will taste much more spinachy and not just look green. 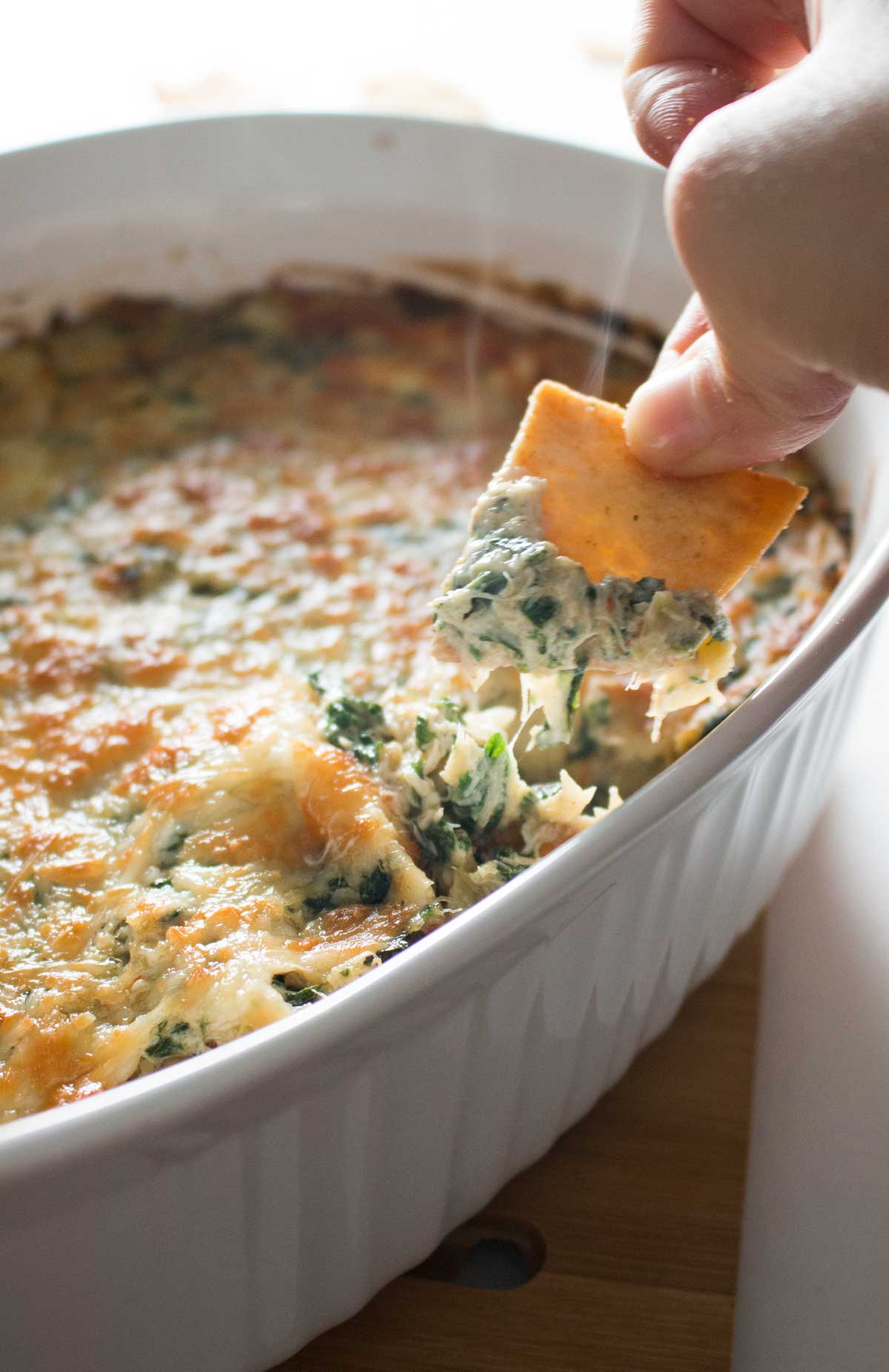 That said, while I do highly encourage the high-quality artichoke hearts and the fresh spinach, you do NOT need to buy the most expensive crab meat for this. None of that $12 lump crab or whatnot. The claw meat (or whatever least-expensive 8 oz container of fresh, real crab you find) is just fine for this, and while the pieces may be much smaller than the lump crab, the claw meat actually tends to be even more flavorful. So it’s less expensive AND makes for a more flavorful crab dip. Win-win!

I put in two small cloves from my turbocharged mutant (i.e., for some reason unusually potent) head of garlic and it was just right, along with lots of Old Bay to complement the crab, some black pepper, and a bit of cayenne pepper because it just wouldn’t be right without a little kick. 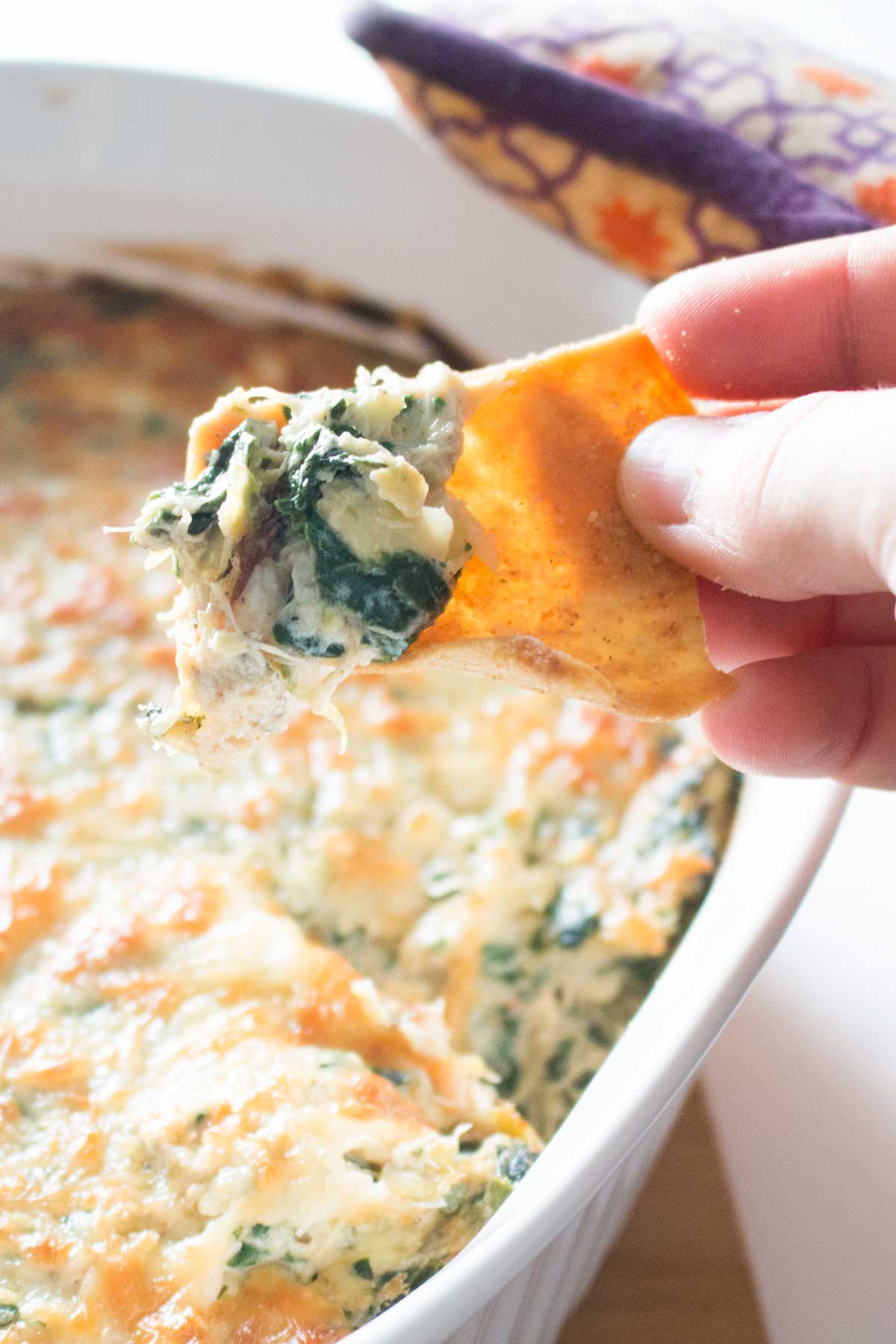 And with a cream cheese base and shredded parmesan both in the dip and on top, the spinach artichoke crab dip is still super cheesy even though has a very high stuff-to-filler ratio. And super cheesy is very important.

I baked it uncovered for about 20 minutes until it was starting to get a little brown around the edges, and then broiled it for a couple minutes just to get that nice golden brown on the cheese on top. That color is so gorgeous! Then we headed over to our friend’s house and the dip was still plenty hot enough when we got there. 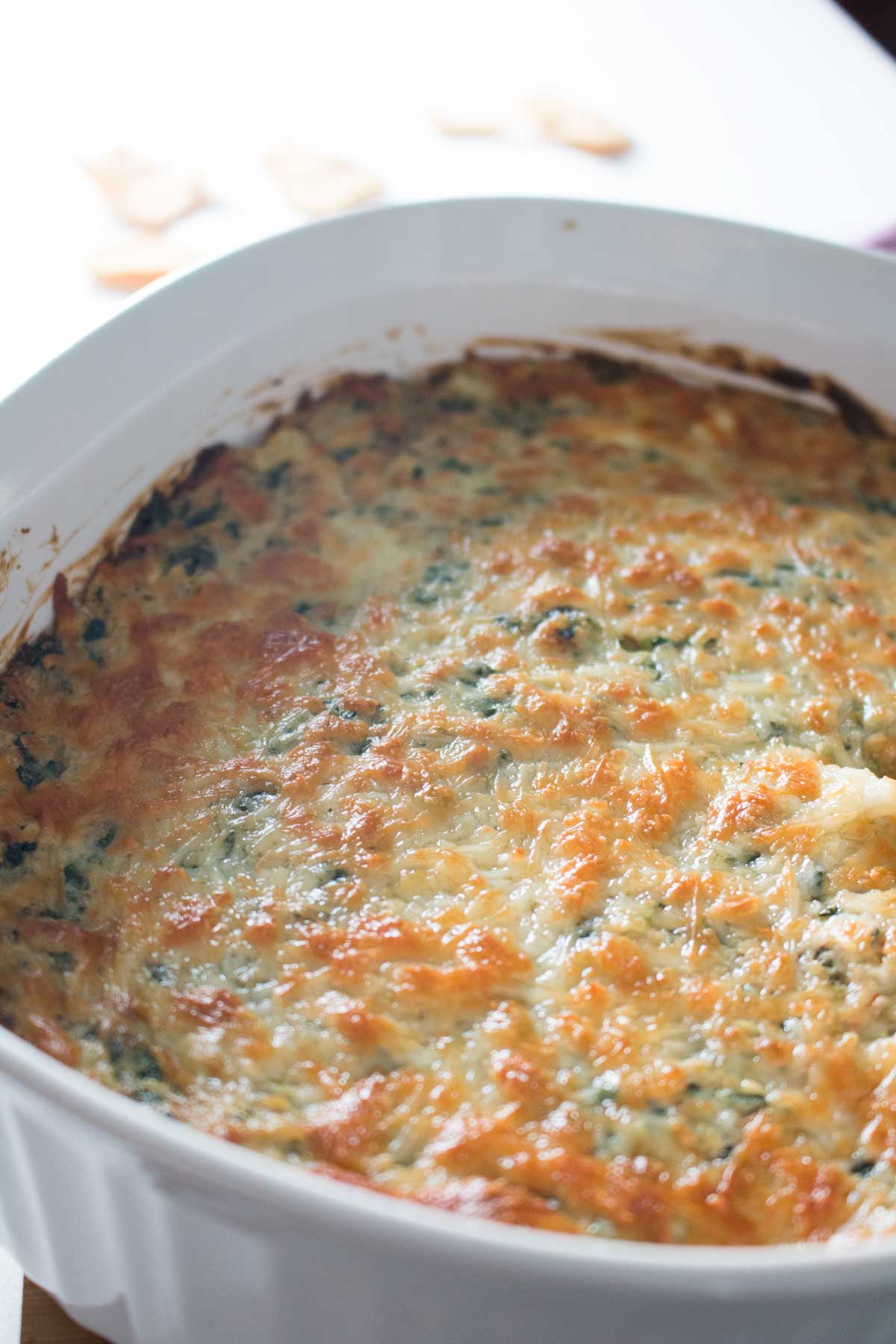 The only downside of this dip is that the people at the party didn’t leave me any leftovers! I was so sad. But not too sad, because it did make me confident that I needed to share this recipe with you all.

I brought a bag of pita chips to serve with this, and I think lightly toasted slices of baguette would be lovely too. If you want to go a little healthier or grain-free, try some zucchini or mushroom slices! I personally think raw zucchini slices are the perfect healthy dip-scooper. They don’t have too much of their own conflicting flavor, they have a nice amount of crunch, and if you slice them on the diagonal you get a nice big surface area.

The only other life question I have is, how long can I hold out before I make this dip again? (Answer: THIS DIP!)

Do you have any go-to recipes to bring to parties? Tell me in the comments!

This hot baked spinach, artichoke, and crab dip is the perfect crowd-pleasing party dip - easy to make ahead, perfectly cheesy, and full of the good stuff. Can be made in a crockpot too!
Print Recipe
Course: Appetizer
Servings: 8
Author: Caroline Lindsey
Prep Time:10 mins
Cook Time:30 mins
Total Time:40 mins