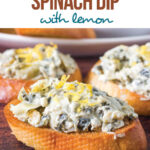 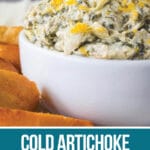 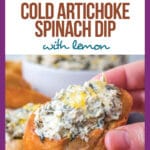 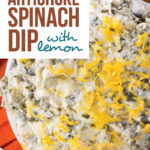 This cold artichoke spinach dip is a lighter variation on the standard dip! Fresh and preserved lemon adds a bright flavor that makes this dip perfect for spring and summer. Serve with crackers, crostini, or fresh veggies!

I was recently introduced to preserved lemons when I sought to replicate this recipe for toasted angel hair pasta with crab, preserved lemons, and habanero cream sauce from my favorite restaurant. I ended up buying a jar of preserved lemons on Amazon and I loved the salty, lemony burst of flavor they added to the pasta dish.

I had some left in the jar and started thinking about what else they would go well with. While preserved lemons are traditionally used in Moroccan cooking, I couldn’t help but envision them as an unexpected addition to a springy, cold artichoke spinach dip.

I gave it a shot by modifying my favorite baked spinach, artichoke, and crab dip recipe and was super pleased with the results!

I was brainstorming spring recipes and came across artichokes as an example of spring produce. I thought a chilled or room temperature artichoke spinach dip with a bright burst of lemon would be the perfect way to add a warm-weather twist to a dip that’s usually served hot.

I often cross the line from “delightfully bright” to “HOLY COW SO MUCH LEMON” without noticing. “More, more”, I beckon to the lemons. They are happy to comply. I’m pretty much a lemon addict and I think my taste buds — and soul — have been desensitized to my favorite citrus.

However, my readers aren’t always happy with the overly-lemony results.

That’s where my sister Julie comes in. She has been nannying for my daughter a couple times a week so I can get some work done on the blog, and I have been roping her into taste testing while she’s at it.

So when I said “yes, this is good” and would’ve been happy to eat the whole super-lemony bowl of dip, she intervened and suggested some additional parmesan cheese would balance out the tang into a dip anyone would be thrilled to eat. She was right, and this dip is now suitable for ALL audiences.

Here’s a breakdown of what you’ll need for this dip.

I’m often frustrated by the leathery outer leaves I find in many canned artichoke hearts. I don’t want to be stuck chewing cud while trying to enjoy my artichoke spinach dip on a dainty tea sandwich or crostini.

I’ve had some success with Progresso brand artichoke hearts in the past but they don’t seem to be available at the grocery stores I commonly shop at. So I searched for a different brand that had good ratings and came across this helpful article about the best processed artichoke hearts from Cooks Illustrated.

I tried two new brands: Vigo canned baby artichoke hearts, and Reese jarred “tender small” artichoke hearts. The Vigo was pretty good and not overly leathery, but they still had a couple slightly fibrous outer leaves throughout. Nothing that would make me chew for minutes so still a very good option.

The Reese ones, however, were amazing and probably the most tender I’ve ever had. I don’t know if the brand was the difference or if it was the jarred vs. canned, but there you have it!

How to use preserved lemons

So to use one, here’s what you do.

There you have it! Now you have nice tangy lemony bursts you can add to your dip.

If you can’t find preserved lemons, never fear. This dip is still great with just the lemon zest and juice!

How to make cold artichoke spinach dip with lemon

Prepare the spinach. I know many artichoke spinach dip recipes use frozen spinach, but the last time I had frozen spinach it tasted like literal dirt. So I steam my own from fresh — and you can really taste the difference!

I just throw it in a microwave-safe bowl with a small splash of water, cover with plastic wrap, and microwave for three minutes until it’s all evenly wilted.

It should resemble a dark green golf ball at this point. Just totally compact. Then you can slap it on a cutting board and chop it.

Prepare the preserved lemons. Rinse off the brine, cut the lemon into wedges, remove the flesh and discard it, and then dice the rind. More details and photos are in the section above.

Drain and chop the artichoke hearts.

Mix creamy base. Add the mayo, softened cream cheese, and sour cream into the bowl of a stand mixer and blend until evenly creamy, or do the same with a hand mixer or whisk.

Mix together dip. Add the rest of the ingredients, adding lemon juice and cayenne pepper to taste at the end.

Then you can either chill it or serve it at room temperature!

Can I use frozen spinach instead of fresh?

I really think it tastes better with fresh steamed spinach, but you can use frozen if you have some you need to use up.

Where can I find preserved lemon?

World Market carries them, as well as some Whole Foods stores (check in advance if your specific location of either store carries them). You may be able to find them at other nicer grocery stores or ethnic groceries as well (It’s a traditionally Moroccan ingredient). I order mine on Amazon. Or you can make them yourself (Please allow a full month for them to cure).

I don’t have preserved lemon. Should I add extra fresh lemon instead?

Can I serve this artichoke spinach dip hot?

Absolutely! You can put it in the slow cooker to keep it warm or bake it in the oven, topped with some extra parmesan cheese if you’d like. Bake in a small casserole dish at 400 degrees Fahrenheit for 20-25 minutes until it’s browning around the edges, then broil for another 2-3 minutes to brown the cheese on top. Keep a close eye on it while broiling so it doesn’t burn!

How long will this keep?

This dip will keep for about a week in the fridge.

What can I do with with cold lemon artichoke spinach dip?

This dip is great spread on crackers or crostini, as a dip for fresh vegetable crudites, or as a filling for tea sandwiches. Check back soon for some extra recipes you can make using this dip!

Where to buy preserved lemons: Preserved lemons can be difficult to find locally. They are a common ingredient in Moroccan cooking so you may have luck at an ethnic grocery store or at World Market. They can also be ordered online: These are the ones I’ve gotten. If you cannot get preserved lemons, they can be omitted from the recipe and it will still be delicious! They add nice salty-tangy bursts to the dip, much like capers would do (do not substitute capers).
Tried this recipe?Mention @pinchmeimeating or tag #pinchmeimeating on Instagram!