This creamy German cucumber salad, or Gurkensalat, is the perfect companion side dish for bratwurst or burgers. Tangy, sweet, and fresh, it’s a deliciously easy summer salad. 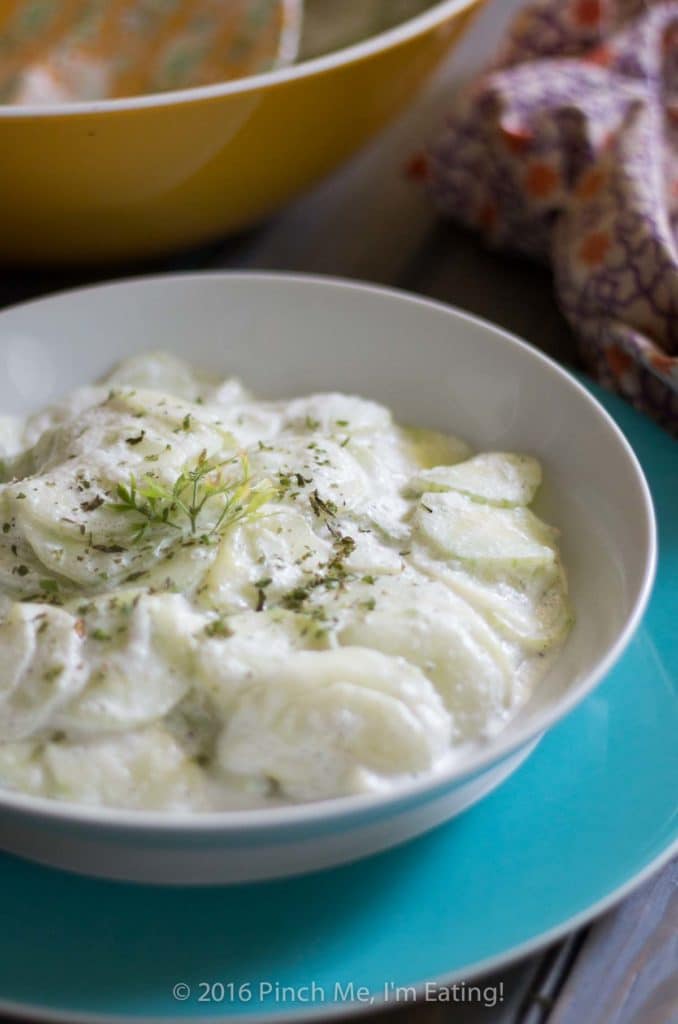 I once did an informal sociological experiment in college that started with a cucumber and ended with a book.

It was in Yuma Hall, my old dorm at the University of Arizona, and I was getting ready to make my usual Italian-style cucumber tomato salad – the one I had grown up making. It’s very simple, just cucumbers, tomato, some fresh basil, garlic, kosher salt, and olive oil. If the tomatoes were good enough, it didn’t need any vinegar at all.

So I was probably waxing poetic about how much I love cucumber tomato salad and a friend of mine — whose parents were immigrants from China — said she also loved cucumber salad, but she made hers with sesame oil, white vinegar, and a little sugar.

Since my recipe was so Italian and hers was so Chinese, this led to a sudden curiosity in how our cultural backgrounds affect the foods we make by default without thinking about it.

I went around asking various friends in the dorm, “If you had a cucumber, what would you do with it?” and everyone had a different go-to cucumber salad, heavily and obviously influenced by their various cultural backgrounds. 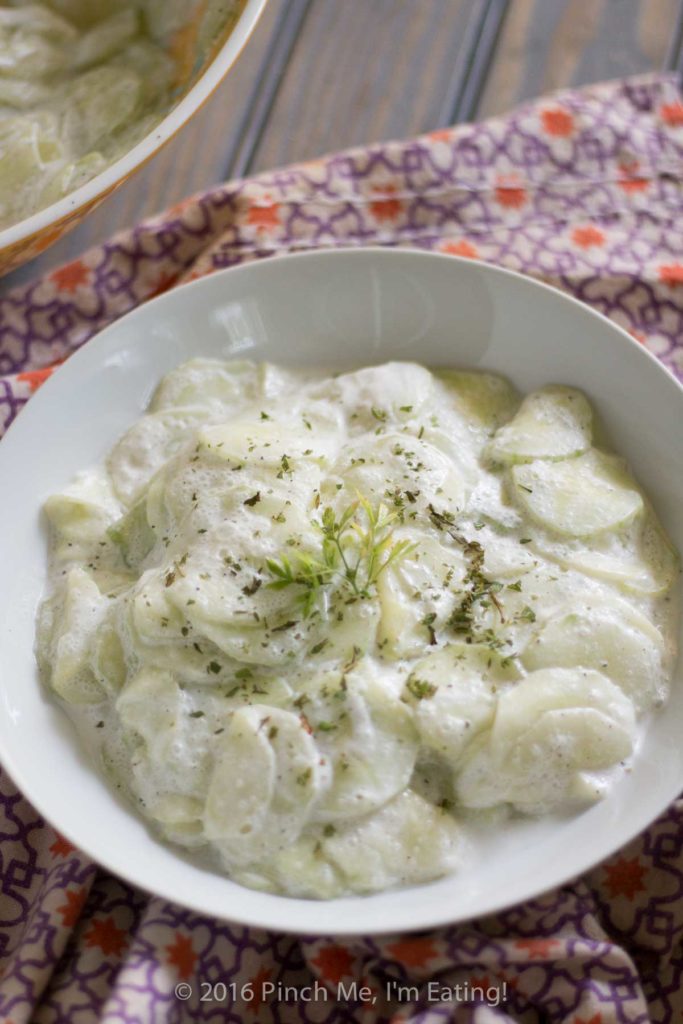 My next question was about pantry-stocking. If you had to stock your pantry with grains/carbs, liquid seasonings, and dry seasonings, what would be the essentials you would buy?

I would stock with pasta, olive oil, red wine and balsamic vinegars, garlic, basil and oregano.

My Chinese friend would buy rice, white vinegar and sesame oil, sugar and MSG. And my Mexican friend across the hall mentioned beans and tortillas, lime juice, oregano and cumin.

Their answers were so stereotypical it was almost laughable.

So all of this conversation led to my next photography project for class: a book examining the food we make and its connection to our heritage.

I had several friends — from one girl born in Jamaica to a sixth-generation American with great-great grandparents from Germany — make a recipe that had been passed down from their parents or grandparents. I made my family’s Italian Easter pie, and my friend Derrick made Argentine beef empanadas – adapted from his family’s Filipino ones because of his semester abroad in Buenos Aires.

I shot photos of the ingredients, the final dish, and my friends sitting down to their meal, and had them hand-write the recipe and the story behind it. It was my first real foray into food photography, and boy have I come a long way from that project seven years ago! 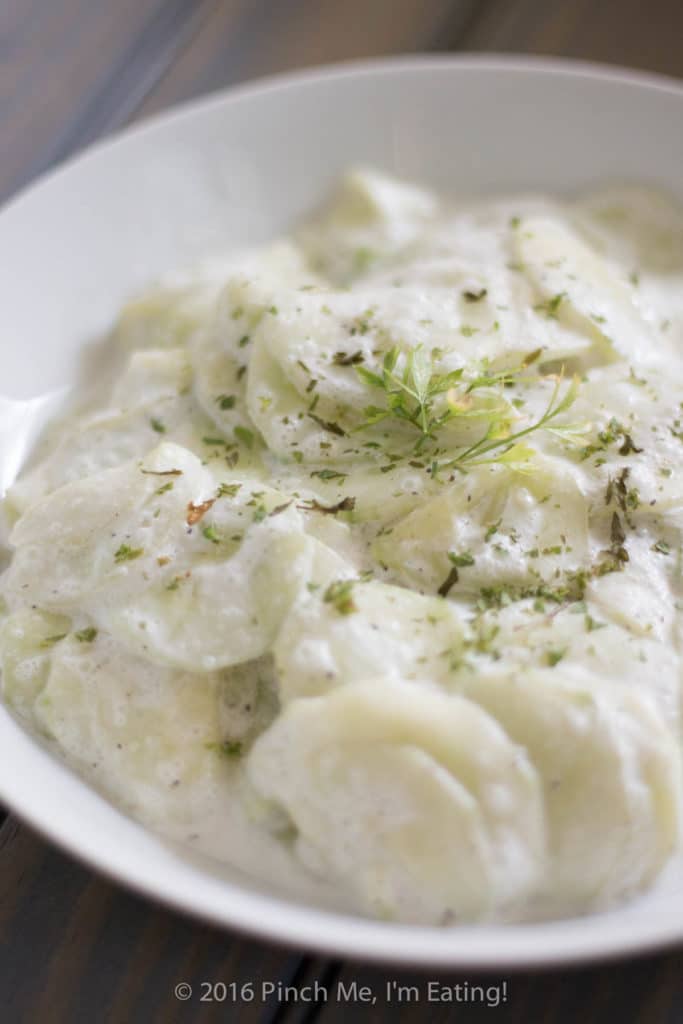 My book’s intro said: “We make it because our parents made it, because it’s what we grew up on and what we take for granted. Some take pride in their traditional and authentic recipes while others may go their whole lives without realizing the influence their heritage has had on their daily sustenance.”

It then talked about being absorbed into the great melting pot of America and how even as our language and religion assimilates, the food we make is one of the last reminders of our heritage — but that too, will eventually fade.

My intro was pretty depressing actually, looking back at it.

What I missed at the time was how amazing it is to have friends from different backgrounds, to be able to share the foods we know and love with others, and to adopt foods from countries other than our own into our daily repertoire.

We’re able to take ingredients and ideas from around the world and combine them with the ones we know to make cultural fusion recipes, or pass on authentic recipes to our children that originate in countries even our grandparents never visited.

It’s globalization at its best – retaining our own authenticity while experiencing and appreciating that of others, and combining old traditions into new and beautiful ones.

This story comes full circle with another cucumber salad. 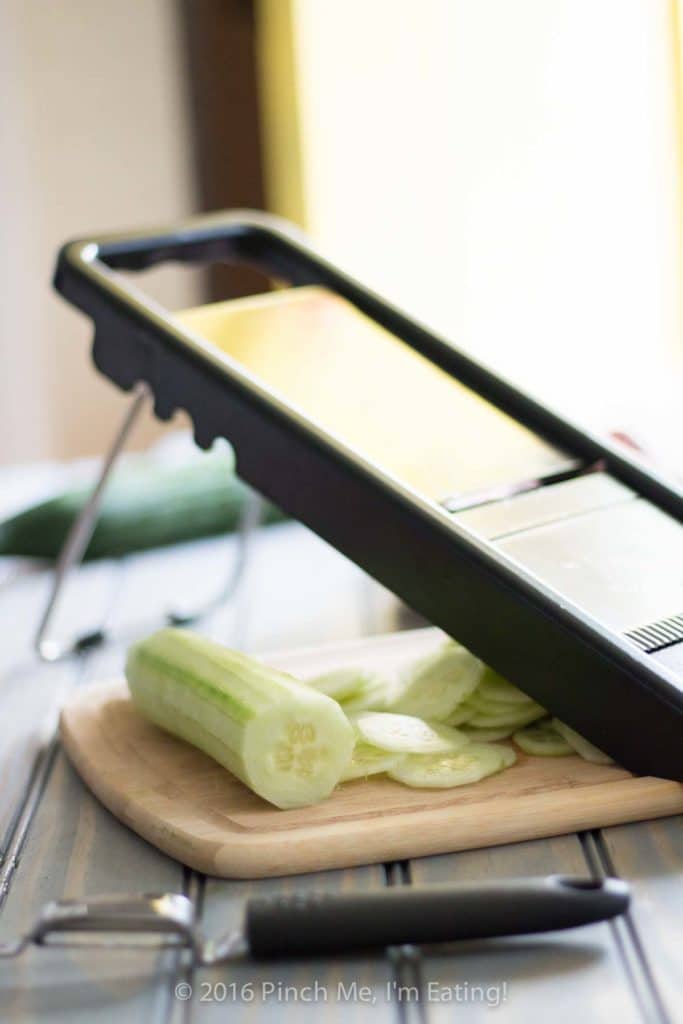 I was making bratwurst and needed a good side dish to go with it, and I came across this German cucumber salad, called Gurkensalat (literally just the German word for cucumber salad).

I made it, I loved it, and the rest is history. It’s become part of my regular repertoire and is a recipe I can call my own, even though I don’t think I have an ounce of German in me.

It starts off with perfectly even, thin slices of peeled cucumber. I used two English/hothouse cucumbers because the seeds are smaller and less noticeable, which is important when you’re cutting full rounds.

If you’re using regular cucumbers, you’ll want to use four of them since they’re much shorter, and if they’re too seedy you may want to cut them in half lengthwise first and scoop out the seeds with a spoon before slicing them.

To cut them, I used this mandoline from Oneida — the whole slicing process takes just a couple minutes and my slices are thinner and more even (and a lot quicker) than I could do by hand! It’s only $32.99 right now on Amazon and you can use it for cucumbers, potatoes, zucchini, squash, and lots of other veggies, but if I only used my mandoline for making this German cucumber salad it would be worth it!

See how even and thin those slices are? It’s truly a thing of beauty and a sight to behold. 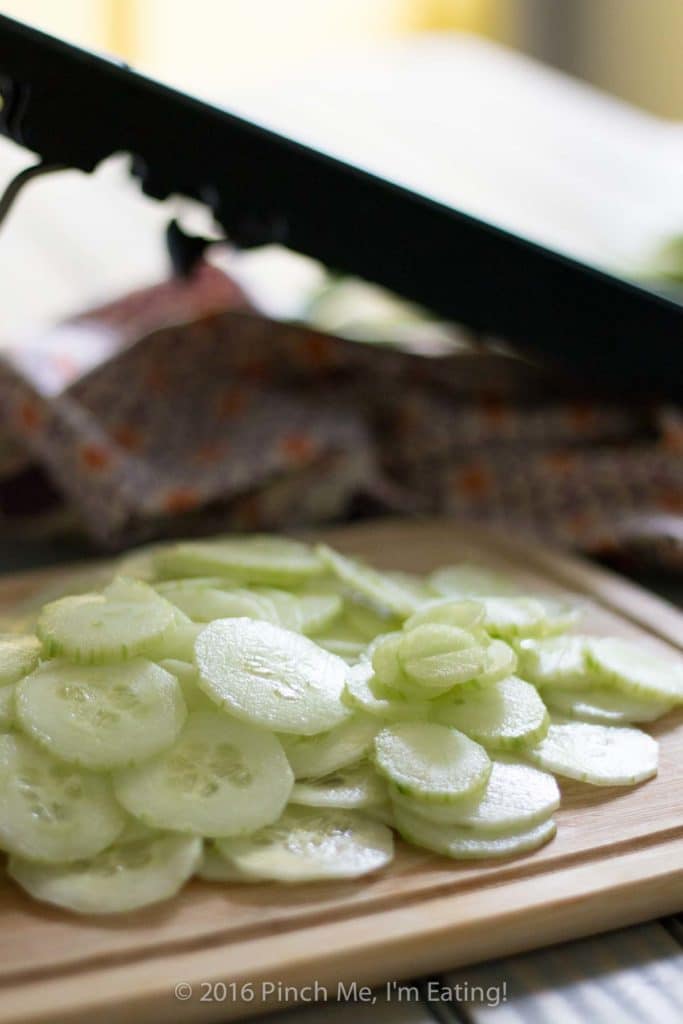 The whole pile marinates in a mixture of apple cider vinegar, sugar, salt, and pepper for about 20 minutes. You can toss it occasionally so all the cucumbers get an equal amount of quality time with the vinegar mix.

Cucumbers are a little finicky because they really need time to absorb flavor – toss cucumbers in a dressing right before serving and they just taste like cucumbers, but give them a little time in some salt and acid and they are a wonderful conveyor of flavor. (I marinate the cucumbers in this tangy cucumber tomato salad with feta and olives too, and the result is wonderful and flavorful!) 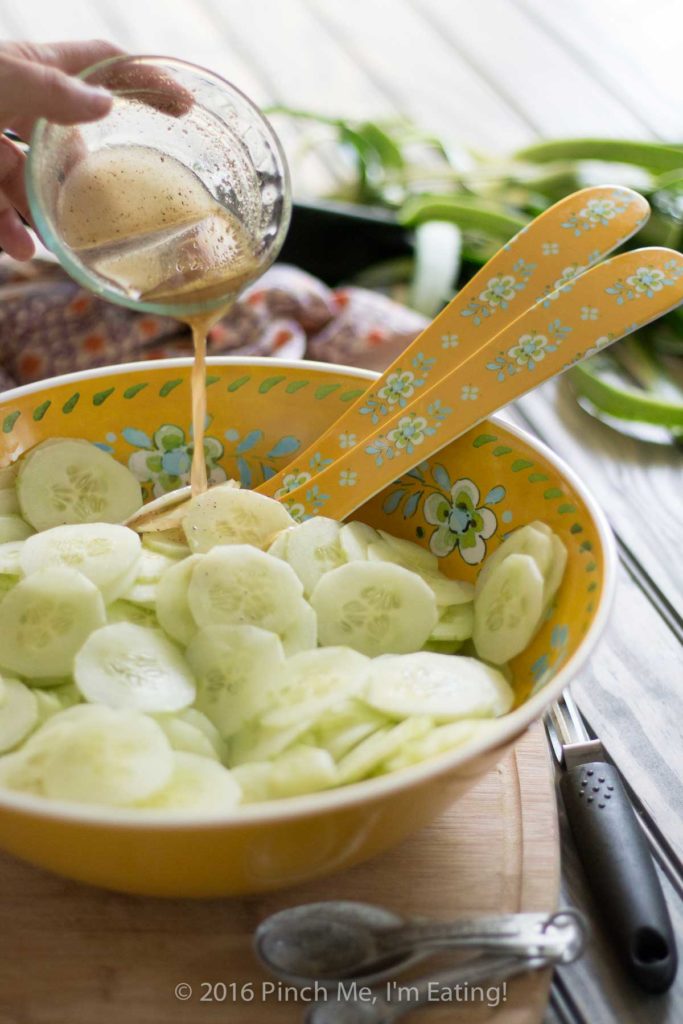 The thing is, as cucumbers marinate, they also release a LOT of liquid. So rather than adding everything at once, you marinate them first and then drain them. It seems weird, like you’re draining off all the dressing, but by this point the cucumbers themselves are so flavorful you don’t need all that liquid watering down your salad.

You don’t need a colander or anything, and you don’t need to rinse them – just hold back the cucumbers with your serving utensils and drain off the liquid into the sink.

Try hard not to eat all the cucumbers at this point – they’re really really good, but remember — you only have one step left before you have a perfectly creamy German cucumber salad. 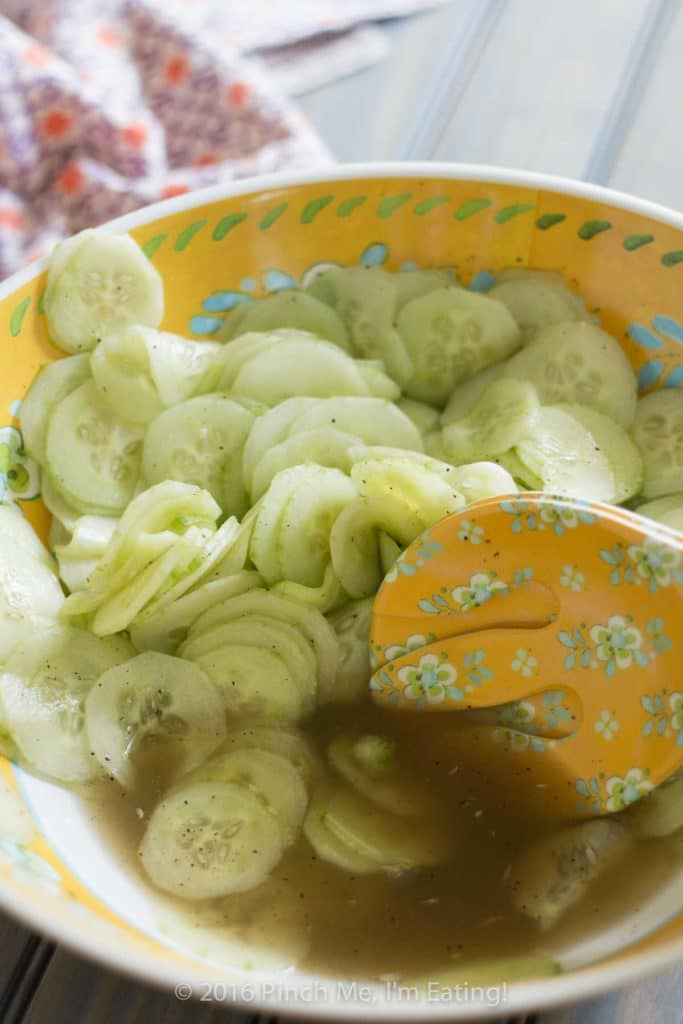 Then, all you need to do is dollop on some sour cream (I use wayyy less than the original recipe I found called for) and mix it in until it gets nice and creamy.

The sour cream kind of froths up when it mixes with the acidic cucumbers and gives it a really light, airy texture you wouldn’t expect. 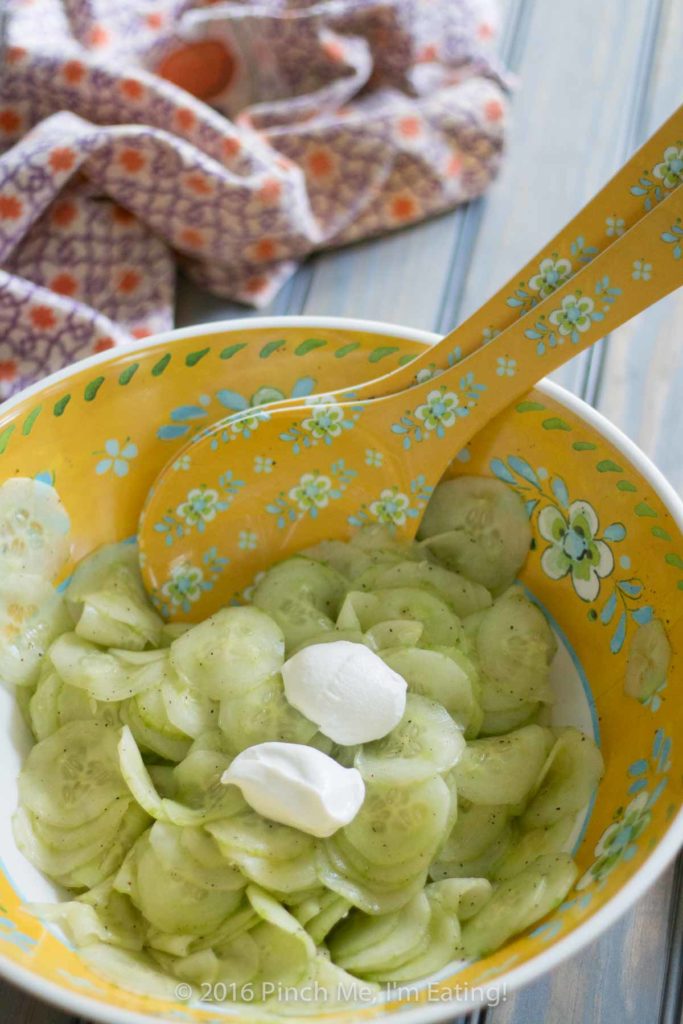 Top your German cucumber salad with some chopped parsley and call it a day. It’s a very simple, quick recipe with very little hands-on time, so you can mostly just leave it alone to marinate while you’re out at the grill making your brats.

So now, if I had a cucumber, what would I do with it?

To be honest, my go-to is still the (to me) basic Italian recipe I grew up with.

But if I want something a little different, I might make this German cucumber salad instead, especially if I’m making bratwurst. Or I might try my friend’s route of using sesame oil, white vinegar, and sugar.

And really, isn’t that the beauty of living in a global culture?

If you want to stay in touch and hear about what else is cooking, sign up for my email newsletter! 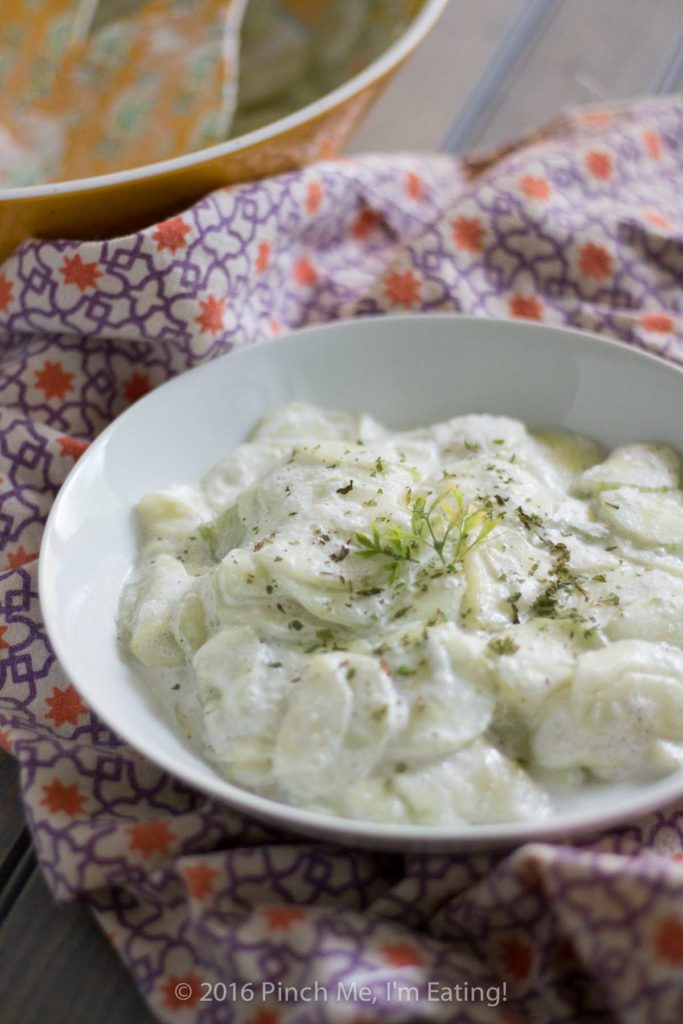 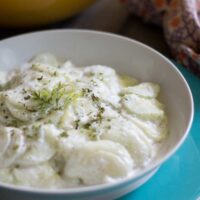 I like lots of salad, and this would make 4-6 large side servings. If you only eat small portions of salad with your meal, you can halve the recipe.
Tried this recipe?Mention @pinchmeimeating or tag #pinchmeimeating on Instagram!