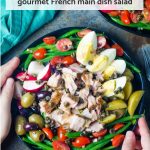 Traditional tuna Nicoise salad is a healthy French main dish salad perfect for spring or summer. With tuna, green beans, potatoes, hard boiled egg, and a tangy vinaigrette dressing, it’s a hearty, low carb dinner salad that’s a meal in itself. This classic gourmet recipe is sure to be a hit for seafood lovers! 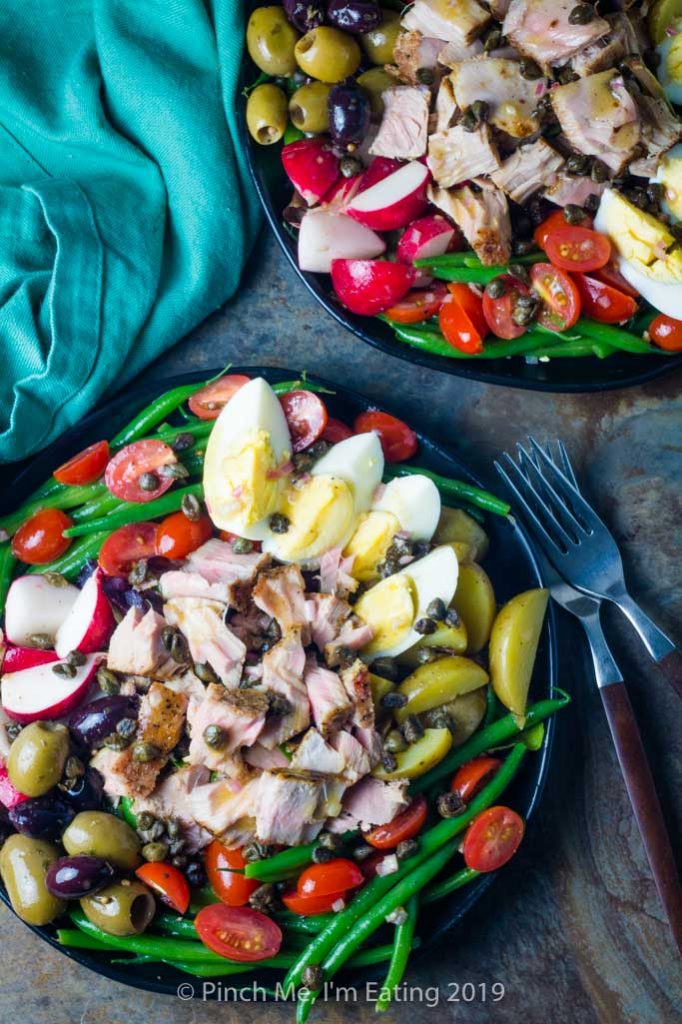 My husband and I are salad lovers. We have a simple green salad with dinner most nights, with some cucumbers, tomatoes, olives, and a simple lemon dressing.

Some nights the simple green salad becomes dinner, topped with some chicken or a piece of fish.

But as much as I love our simple green salad with lemon vinaigrette, it’s nice to mix things up now and then.

Enter the classic tuna Nicoise salad. Originating in Nice, France, it’s a composed salad rather than a tossed one, meaning each ingredient is artfully arranged on the plate rather than mixed together. And I do love to present a beautifully-composed salad plate, like this smoked salmon, tomato, and avocado rose salad or this Montreal chicken salad, inspired by a meal from our honeymoon in Canada.

Sometimes composing a salad means that the dressing only gets drizzled on at the very end, making for patches of undressed salad (scandalous!) underneath the top layer. To avoid this, I tossed each ingredient separately with a little dressing before arranging it on the plate. This gives the consistent dressing coverage of a tossed salad with the beauty of a composed one! Win-win. 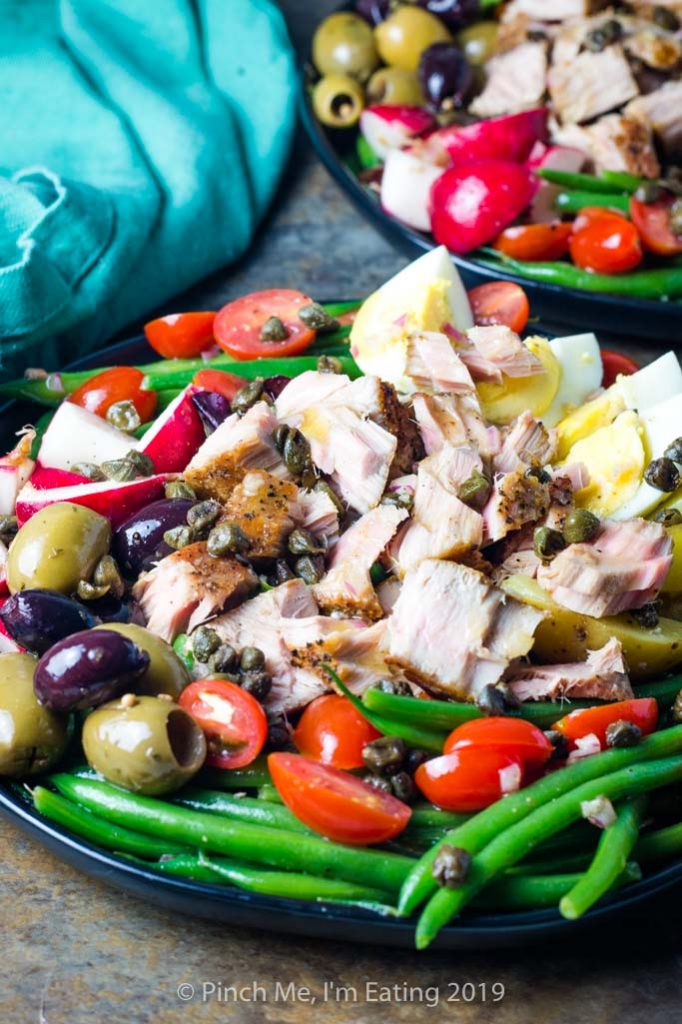 While there are conflicting opinions on what a Nicoise salad should and may contain, there are several recurring ingredients you’ll commonly see. Apart from the tuna, a Nicoise salad frequently includes haricots verts (French green beans), potatoes, hard-boiled eggs, tomatoes, and Nicoise olives. I also included some radishes and toasted capers in mine.

Traditionally, this salad is made with a high-quality canned tuna, but I used fresh tuna steaks instead. I cooked them with a little olive oil, salt, and pepper, and then broke them into small pieces by hand, rather than cutting, so they’d flake naturally. It’s definitely cheaper and easier to buy a can though, and it’s a great way to use canned tuna that’s not your default mayo-and-relish tuna salad. 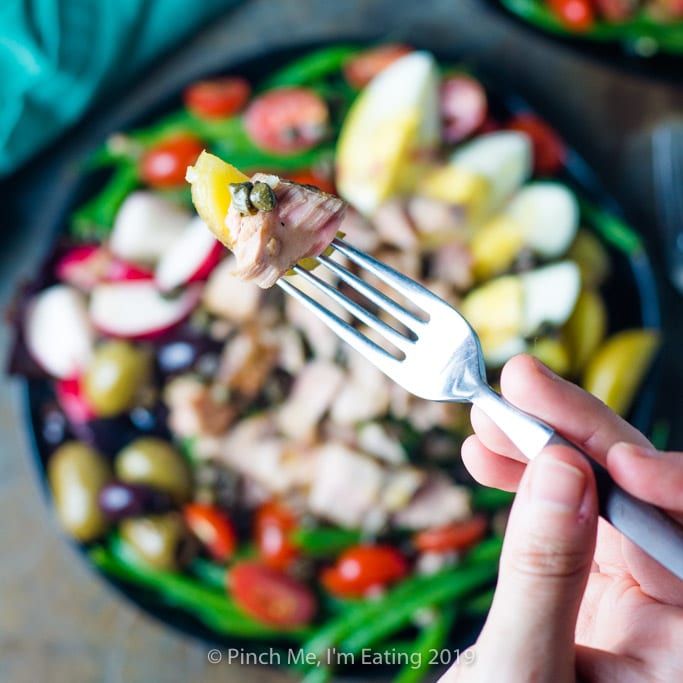 Haricots verts are a thinner, shorter, and more tender French version of a standard green bean. If you can’t find haricots verts, you can use regular green beans. Just make sure you take off the ends and the strings — you don’t want your salad to be tough and fibrous!

To blanch haricots verts, add them to boiling water for 2-4 minutes or until tender-crisp. Then plunge them into ice water to stop the cooking and keep them bright green. Regular green beans may require a bit longer to get the same amount of tenderness since they are larger.

Because there are so many ingredients in this salad, you really don’t need many potatoes. I used two baby golden potatoes for each salad: unpeeled, boiled until tender (about 10 minutes), and cut into quarters. 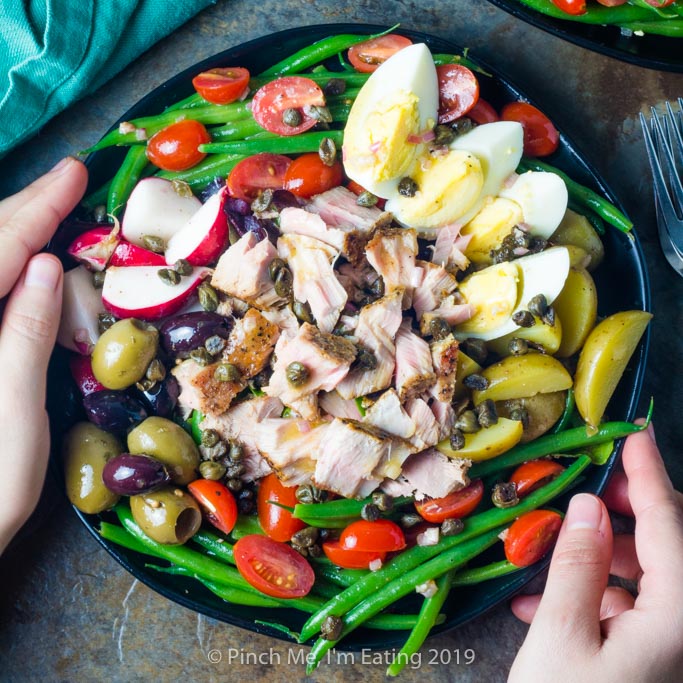 I used one hard-boiled egg per person. To hard-boil eggs, cover the eggs with cold water and bring to a boil. Cover, remove from heat, and let them sit for 8-10 minutes. Plunge them in ice water to stop the cooking and keep the yolks from turning brown.

Quartering the eggs gives an more elegant feel than slicing, which to me has a casual-salad-bar feel to them.

You can use any tomato you like in this, but I liked halved grape tomatoes since it gave some variety of shape and size to the composed tuna Nicoise salad. 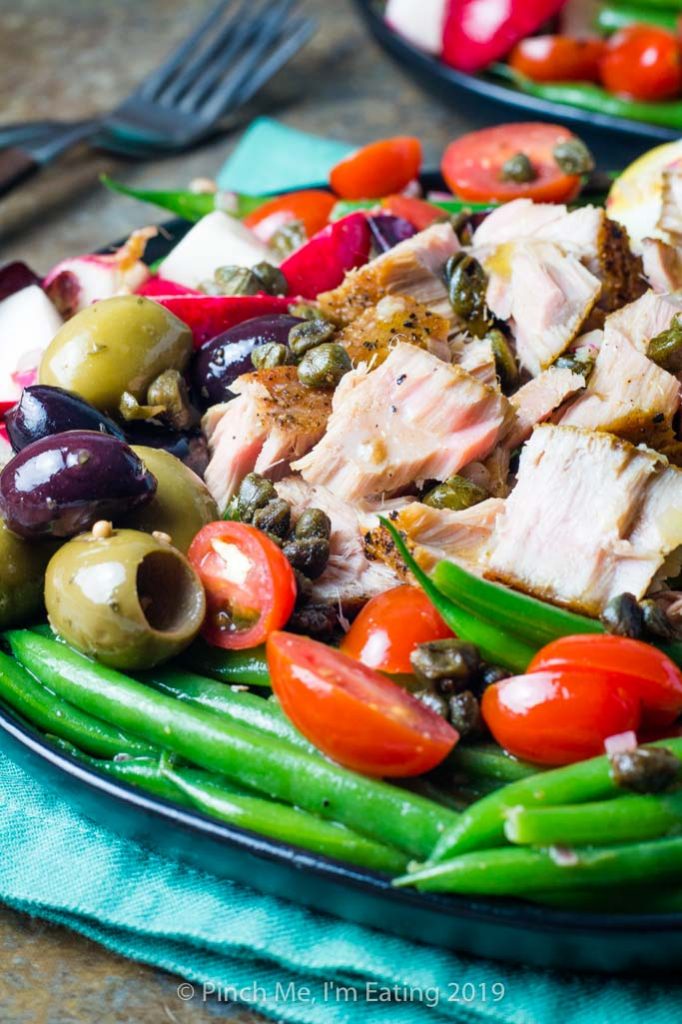 Nicoise olives are small, brown-to-black olives brined with plenty of herbs. They can be difficult to find, so you can substitute kalamata or other brined black olives if you can’t find them. Definitely go with fresh olives from an olive bar (which I’ve seen at Harris Teeter, Whole Foods, and Earth Fare) or jarred ones, rather than olives from a can – they just don’t have as much of that punchy salty flavor. The ones I used were a pitted olive mix that included Nicoise and other types of olive.

Use whatever greens you’d like – I used a combination of butter lettuce and baby red and green leaf lettuce.

The dressing for this Nicoise salad is a simple vinaigrette with red wine vinegar, minced shallots, dijon mustard, and a single minced anchovy, which you can omit if you’d like. Anchovies are another common ingredient of Nicoise salad, so you can arrange them on the plate alongside the other ingredients, mince one into the dressing, or both.

Feel free to get creative with ingredients too! I added some quartered radishes in, along with some pan-fried capers. Next time I may omit the radishes and add artichoke hearts instead. It’s your salad, so do what you like!

Classic tuna Nicoise salad makes an excellent self-serve platter as well, perfect for a brunch party or family-style dinner. You can place some large lettuce leaves as a bed on a large platter, then arrange each ingredient on top and allow people to serve themselves with salad tongs. 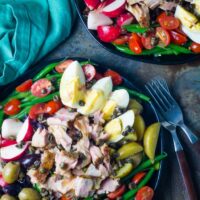 All salad ingredient quantities are approximations - if you love a particular ingredient, add more, or if you don't like one, skip it!
Tried this recipe?Mention @pinchmeimeating or tag #pinchmeimeating on Instagram!