Fried green tomatoes with Cajun remoulade and pickled shrimp combine into a tangy, spicy, and crispy Southern dish you can use as an appetizer, side dish, or entrée! 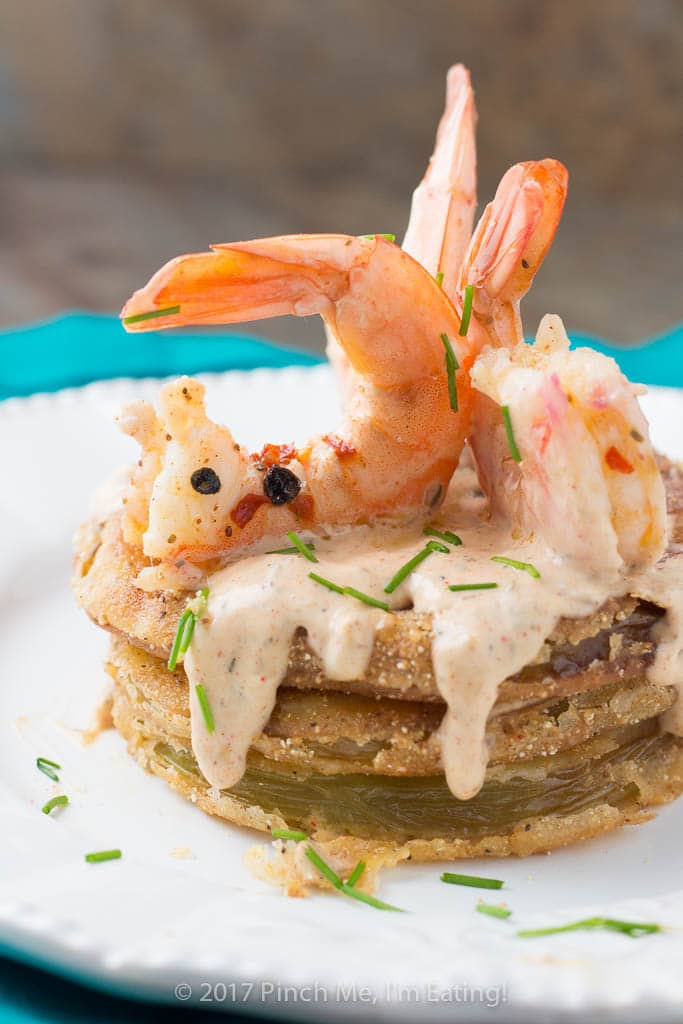 It’s no secret that I’m from Charleston, SC and I love Southern food. Pulled pork, sweet tea, collard greens, and okra, any way you prepare it.

There’s a lot of Southern food that is pretty foreign to people from other parts of the country. Not even kidding.

When I went to college in Tucson, Arizona, my favorite annual festival was called “Tucson Meet Yourself” and nicknamed “Tucson Eat Yourself”.

It’s a multicultural festival including performing arts, handcrafted goods, and — most importantly — food, from all the different ethnic and cultural groups around the city.

You’d basically go and gorge yourself on as much ethnic food from as many different countries as possible.

One year I was walking past all the food booths from Sweden, Italy, Greece, Guatemala, Honduras, the Philippines, Mexico, Laos… and came across a booth selling fried catfish and sweet tea.

Along with all these other countries, there was a station selling good old Southern American food. 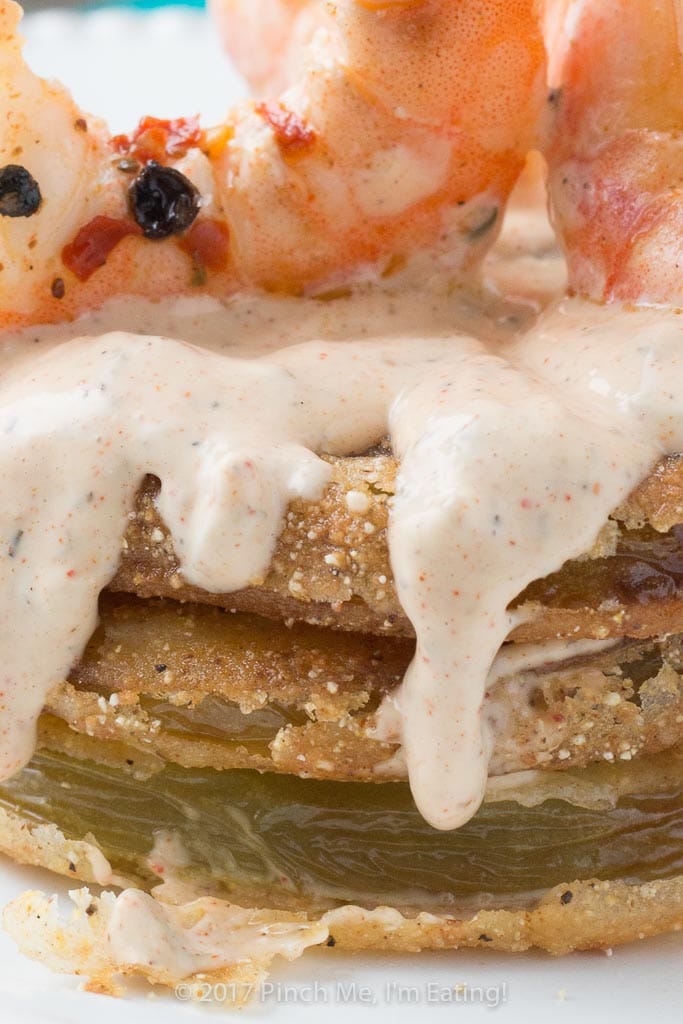 It cracked me up when I saw it! Southern food, to Arizonians, was a foreign, unfamiliar cuisine worthy of being placed alongside all the other countries’ foods in an ethnic food festival.

So when my friend Marlee, who lives in Phoenix, Arizona, and blogs at I Just Make Sandwiches, mentioned that she loved fried green tomatoes, I told her I didn’t know Phoenicians ate FGTs! She said they served them at the last restaurant she worked in.

And so we decided to have a South vs. Southwest Fried Green Tomato cookoff on our blogs! Each of us would really emphasize our own regions in our different takes on FGTs. 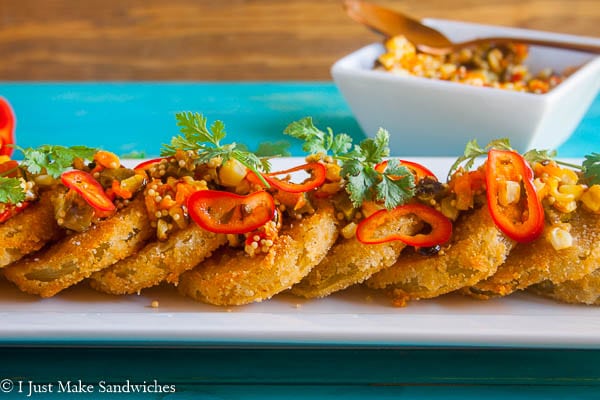 If you are unfamiliar with fried green tomatoes, or if they sound odd to you, let me explain. A classic Southern food, they take advantage of late-season and other unripened tomatoes.

The green tomatoes you use for frying aren’t a special kind of tomato that’s green when ripe, like a green zebra tomato – they are simply tomatoes that haven’t ripened yet. 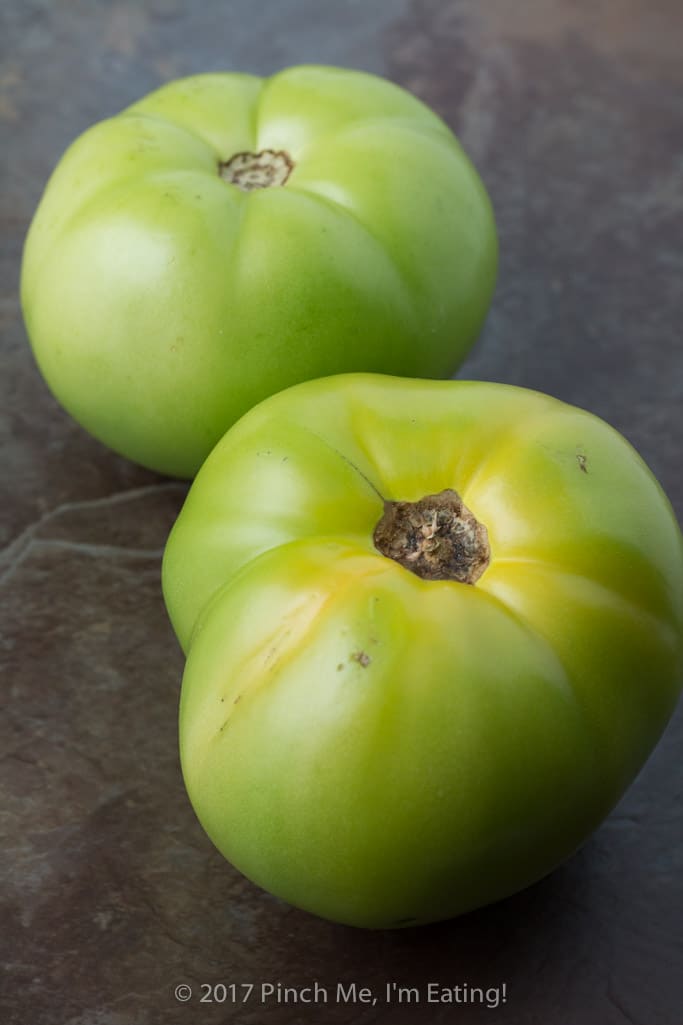 The sugars you find in a ripe tomato haven’t developed yet so they aren’t sweet. It’s basically like a whole different vegetable than a ripe tomato — firm and a little tart.

They’re good for pickling and great for frying, because the sturdier texture holds up to the heat. A green tomato softens while frying, but you want them to still have a little “al dente” texture to them, so don’t overcook. 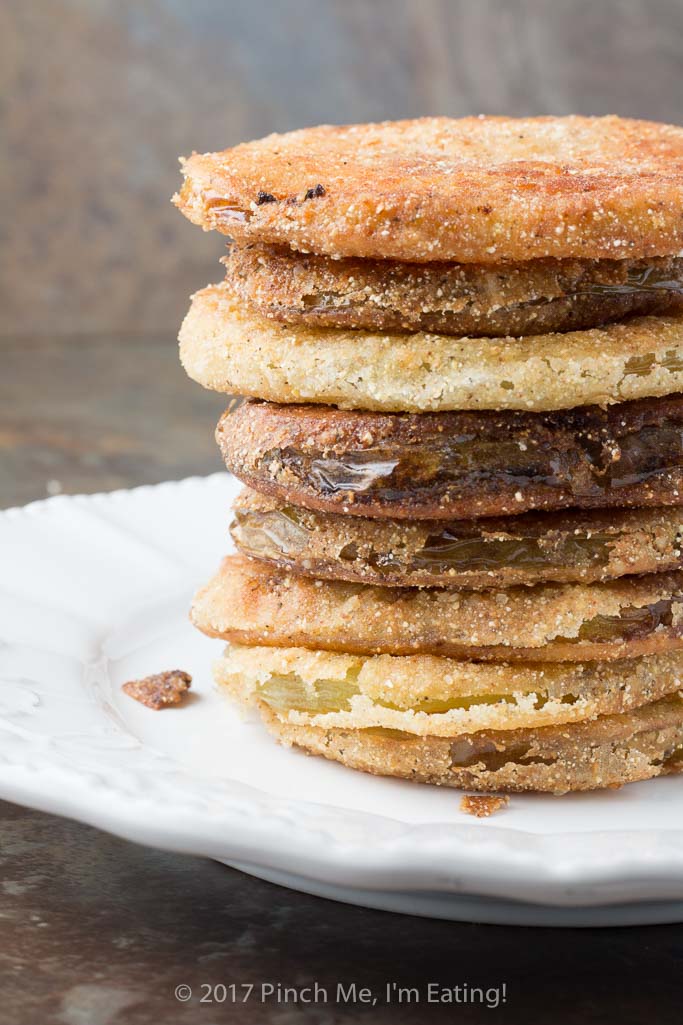 If you haven’t had them, they’re definitely worth a try! Just don’t expect them to taste like the red tomatoes you buy for slicing. Summer and early fall is the season for green tomatoes. If you can’t find them in your grocery store, try a farmer’s market (or your own garden!). You will want to use them within a few days of purchasing them or they will start to ripen on your counter!

About this Fried Green Tomato Recipe

I opted to make fried green tomatoes topped with a cajun remoulade and paired with pickled shrimp — a versatile, very Southern dish that could serve as an appetizer, side dish, or light entrée. 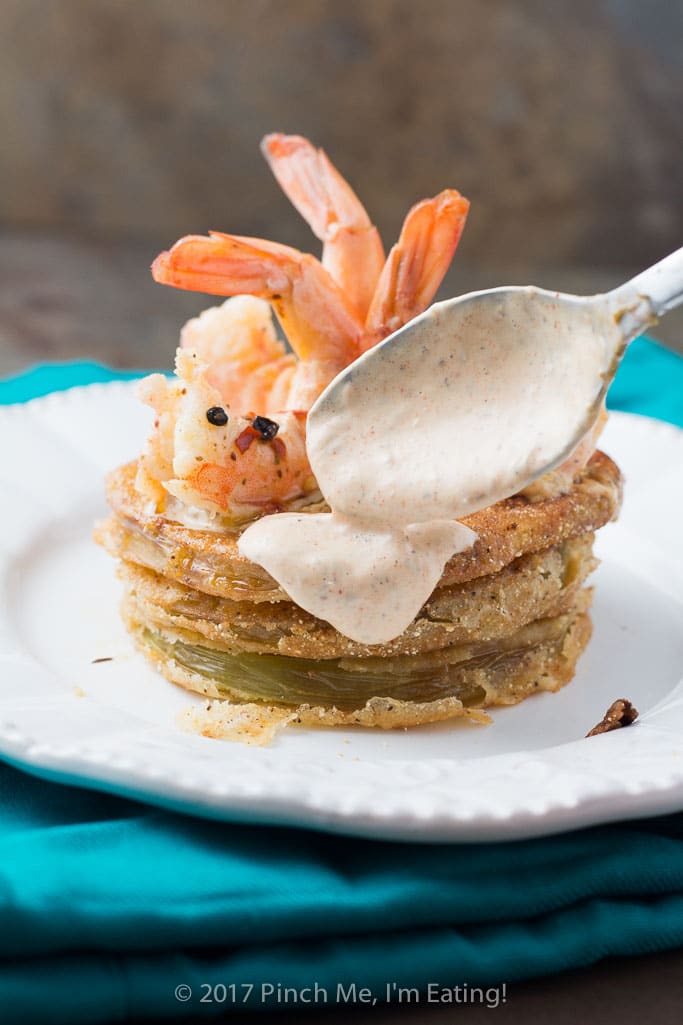 The best part is you can make the remoulade and pickled shrimp in advance. All you have to do the day of is fry your tomatoes and assemble the dish!

The tomatoes are coated in a lightly seasoned flour and cornmeal mixture, then dredged in buttermilk (or milk and a little vinegar, as I usually end up doing), and floured again. The initial coating gives the buttermilk something to stick to, and the second flouring really solidifies the breading so it doesn’t fall off when you fry it.

You may be envisioning a Fry Daddy or a pot full of oil, but really all you need is about a half an inch of vegetable or peanut oil in a cast iron skillet. Just flip your tomatoes halfway through and you’re good to go! 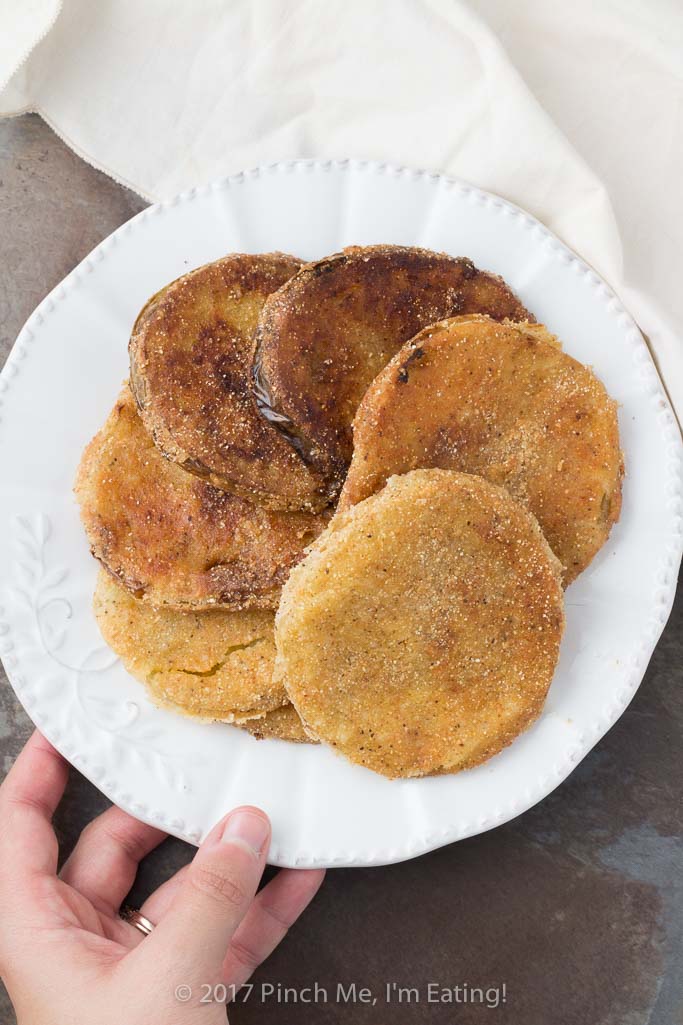 The remoulade is packed full of Cajun flavor with a little heat, and chopped capers mixed throughout for some added tang and texture.

Finally, the pickled shrimp rounds out the whole ensemble.

Does the thought of pickled shrimp seem odd to you? It did to me until I had it for the first time recently. It’s another classic Southern food and it’s nothing to be wary of.

Just call it “Tangy marinated shrimp” and you’ll feel much more at ease – but that’s essentially what it is. You just marinate it after cooking, rather than before.

First you boil the shrimp, peeled and deveined but with the tail on, just until pink. Then they marinate for at least a few hours (or a few days) in a dressing of olive oil, champagne vinegar, lemon juice, and a few spices. They’re packed in with some sliced red onion and paper thin rounds of lemon for extra flavor. 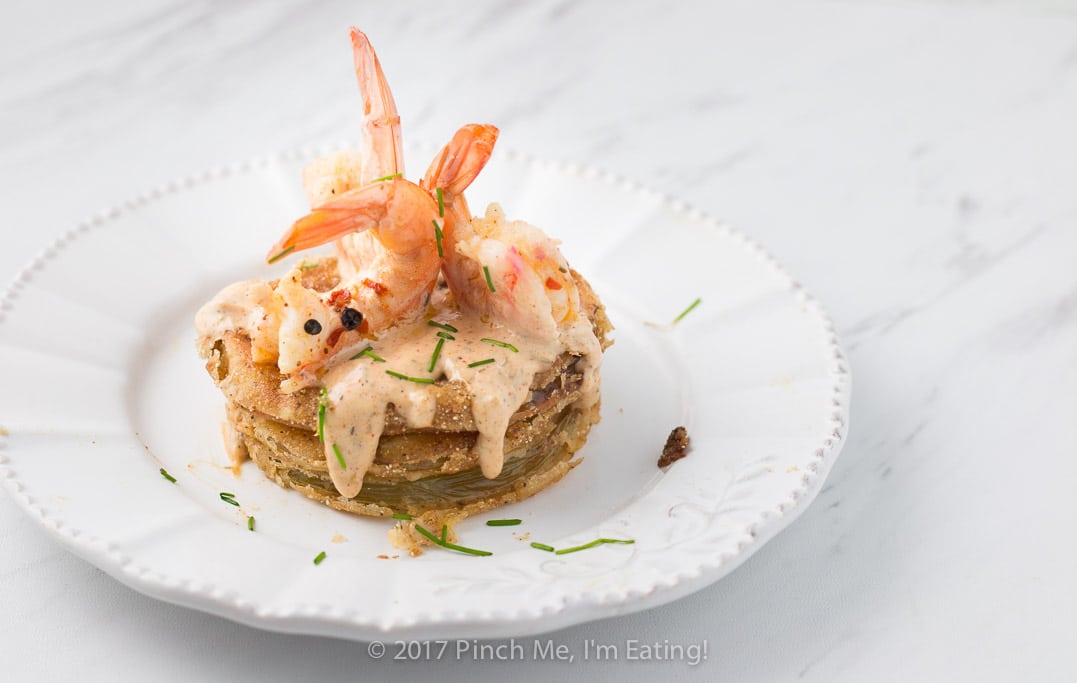 I made this right before we went to Italy for a couple weeks, so our friend-slash-catsitter had the responsibility of eating the leftovers.

I asked for her feedback on the pickled shrimp: Did she have any critiques?

She said it was so good she called her mom to tell her about them.

Then she ate all the shrimp.

Later, she used the leftover dressing as a sauce for some pan-seared cod and ate the pickled onion slices with it.

Then she licked the jar clean.

The only part she didn’t eat was the lemon rind. 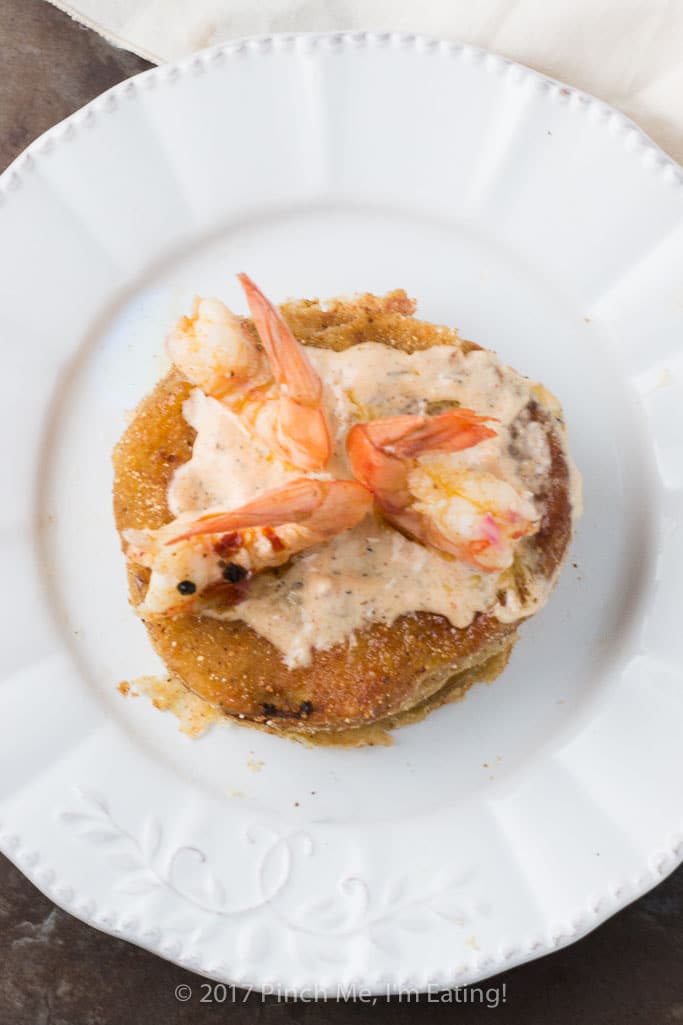 If you have leftover shrimp from the fried green tomatoes, another good option is to slice them in half longways and serve them atop some avocado toast with a little squeeze of lime! Yummm!

You can make just the pickled shrimp, remoulade, or fried green tomatoes from this recipe, but I think you’ll really like them all together! Hope you enjoy! And be sure to check out Marlee’s Southwestern Fried Green Tomatoes too!

Have you had fried green tomatoes? What about pickled shrimp? Let me know what you think of them in the comments! 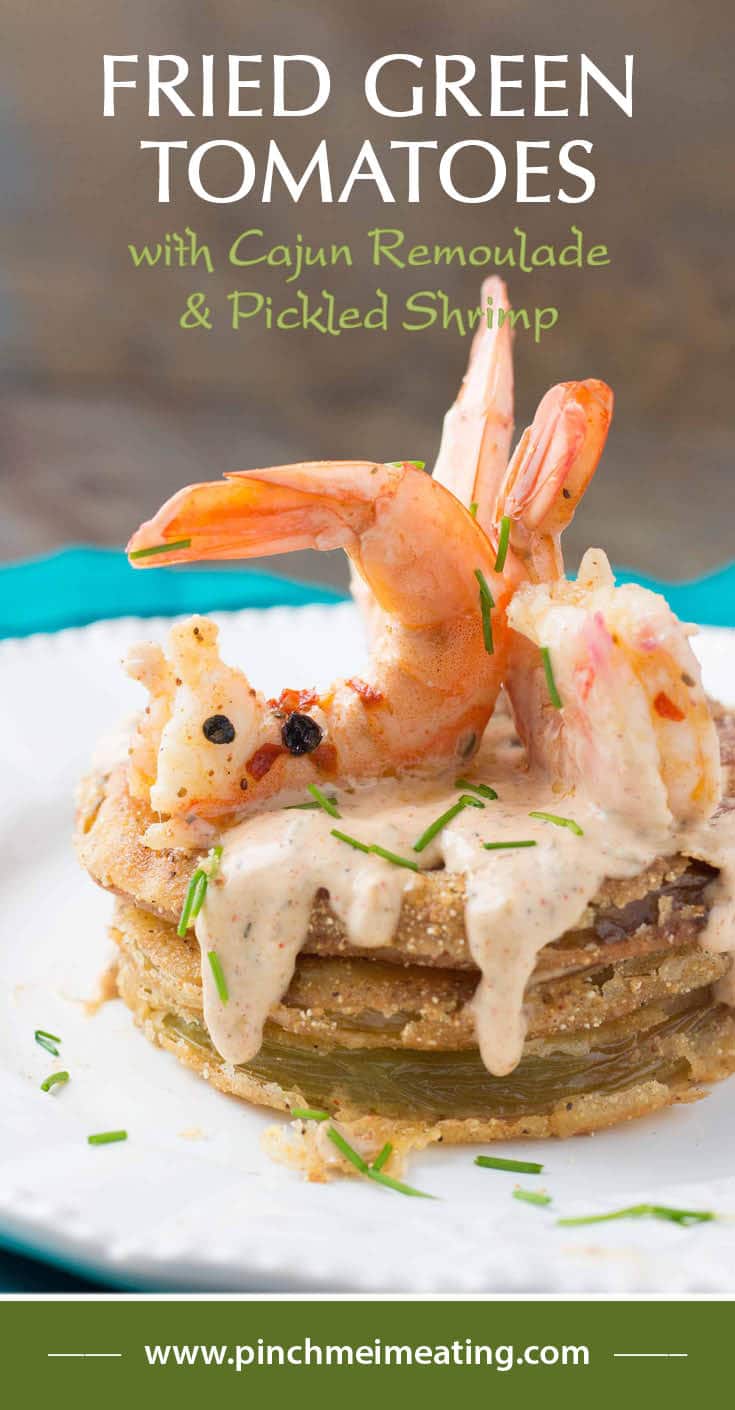 Fried green tomatoes with Cajun remoulade and pickled shrimp combine into a tangy, spicy, and crispy Southern dish you can use as an appetizer, side dish, or entrée!
Print Recipe

For the Cajun Remoulade

For the Pickled Shrimp

For the Pickling Mixture

For the Fried Green Tomatoes 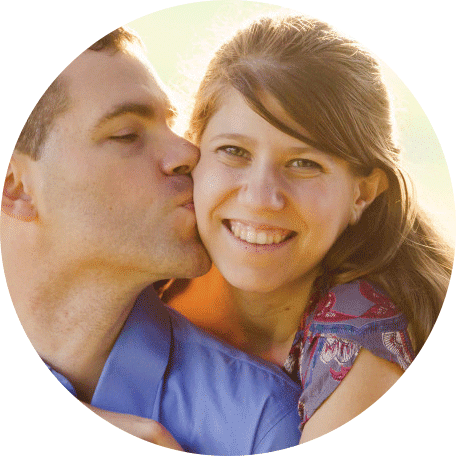